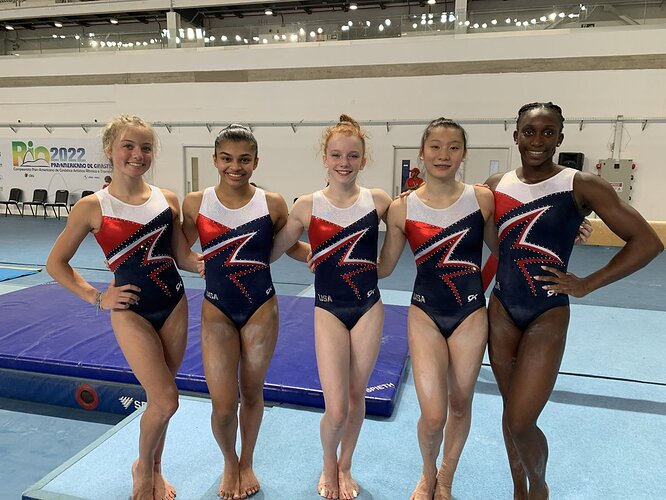 I like it but I hate it at the same time.

US Senior women podium training leo. Like the color, hate the design.

Just posted it on the leo thread. I love the colour and hate the design. Looks like a neck strap to hold their pants up. And the vertical strap cutting the chest in half if just awkward! Terrible design. Do they never make a sample and try it on a real person and see how it looks?

Compared to the others, this is a dream. Dated looking sure but at least decent looking

I like it. No mesh or fake flesh, not overly busy, navy as a base color looks good on everyone. I yearn for the days of leotards that look like something athletes taking part in an athletic event would wear. Enough of this Vegas Showgirl trash.

Put white sleeves on that leo and that would be a great competition look.

Those switch split halfs were uniformly BAD fir the US.

Sigh, in fact, it looks like not a single US coach has learned the lesson about dance skills.

I know everyone expects USA to win, but I do think Brazil is going to give them a run for their money.
Brazil is experienced and Andrade and Saravia can put up big numbers.
Interesting to see if they go with Olivera for bars since they lost Barbosa’s DTY.

But yeah let’s see if USA can hit in both qualifications and team finals (which is 3 up 3 count IIRC).

Yeah Brasil is looking good in a 3-3 scenario. Andrade is not doing fx, correct?

A few days ago Andrade hadn’t decided if she was doing floor.

Unfortunately the two leaders Ajalla (13.400 on beam!) and Mainardi are both 2008 and won’t be able to assist Argentina (should they make Worlds next year) as they aren’t eligible as seniors until 2024.
With them and the current team, Argentina might have a strong chance at qualifying a full team to Paris.

I do hope FIG goes back and revisits eligibility. Now that teams can only qualify to Worlds via continentals and now that they can only qualify to Olympics via Worlds, both held the year before the Olympics, the FIG really needs to allow 16 year olds that are eligible for Olympics the chance to compete and help their teams qualify to the Games.

This routine came across my Twitter feed and it’s worth a watch:

@Pamchenkova
The Argentine juniors were very impressive today and will almost certainly end up on the podium. Isabella Ajalla has so much potential. https://t.co/uZh8sskH8J
5 Likes
irichluck21 July 14, 2022, 6:41pm #38

United States needs to average 12.242 to pass Canada for the gold medal in the junior division.

Pretty good news that this new group of juniors are hitting their routines and are rewarded for execution.
Bodes well for the future.