Where are the 6.9+ bar routines

Fan Yilin’s routine with E dismount is 6.9 in this code. Why are the Chinese gymnasts (and anyone else capable of Inbars + one-arm pirouettes) not copying that template?

Another thing about Fan Yilin’s routine is the Gienger can be replaced with a Hecht 1/2 release and still have the same difficulty score, while likely reducing deductions. Those hecht releases should be easier for most people to catch without bent arms, and it’s not hard to keep your hips slightly above bar height before re-catching with a Hip-circle or Toe-on, which eliminates low height deduction. The toe hecht 1/2 has never actually been competed before, but would be easy to teach IMO - being able to push off the bar with your feet is an advantage, and you don’t actually have to get much amplitude on this move, you just quickly do the 1/2 turn after pushing off the bar and you’re already done. I’m pretty sure it would be allowed to almost stand on the bar with this move, actually, like the common toe-circle around the low bar, but simply jumping off the bar right before getting to the point of “standing”, and doing a quick 1/2 turn and re-catch.

Full notation of the routine:

Not all gymnasts, even those who are good bar workers, are able to feasibly do piked stalders

yeah and those who can’t aren’t usually also able to do the 1-arm inverted work. It’s not that crazy she’d be the frontrunner D-score wise. What’s a toe hecht 1/2? Sounds like something from the 80’s to me

Is there a video? Or do you mean just copying her old routine template?

Wei Xiaoyuan and a couple others clearly have the ability to do this 6.9 routine, but they are doing worse routines for the code. It’s frustrating, especially when Bars + Beam are where China really need to gain their advantage.

The topic can extend to other routine construction issues as well. The number of people doing unconnected jaegers is very confusing. Why aren’t we seeing Weiler 1/2 everywhere? This move is easy to do and connect. Why instead do two moves (giant 1/2 + jaeger) just to get the reverse grip requirement into the routine? It’s actually 3 moves most of the time, because you have to do another giant 1/2 or cast 1/2 after the jaeger too (look at Rebecca Andrade’s routine for example). That’s just inviting more deduction and less D score on top of it. She should start the routine with Weiler 1/2 instead; it’s so much better competitively.

I think you may be underestimating the difficulty of toe-on releases, Weilers, and hit handstands with 1/2 turn skills.

I would literally never advise any gymnast to work this connection.

Maaaaybe someone like Shilese who can hit perfect handstands. But even so, its a huge risk for a massive deduction. If you don’t finish the turn within 10 degrees they downgrade it to a B which defeats the whole purpose of doing it. Not to mention the E Panel deductions.

I can’t think of what it is either 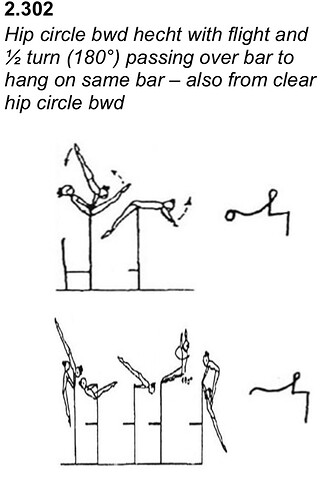 If it’s the skill I am thinking of, it was very common in the 70s and 80s… I’ll try to think of a gymnast who did it and post a vid but I’m having trouble visualizing how the skill would work in the routine that gymbeauty posted

I don’t know how many deductions would be minimized, but it wouldn’t be the same difficulty because a gienger is D. Assuming the values are right, this website has gifs of a bunch of C-rated skills to half turn on the same bar including the hip hecht 1/2: https://wagymnastics.fandom.com/wiki/Uneven_Bars_Skills#C-value_3

Do gifs work on this forum? That link just posted also works. Not a demanding skill, very viable out of a shaposh, and can be connected out of other releases too - just swing up with hips briefly against the bar and it would count.

I think lots of routines should be using it. In the “Russian routine” if you connect into it out of the jaeger, you’re getting .2 bonus and removing the orphan 1/2 swing that gets a deduction anyway.

There are already 8 other D+ skills in the Fan Yilin routine, so changing the gienger to this keeps the same difficulty score, while theoretically reducing deduction.

I think you may be underestimating the difficulty Weilers

I don’t think so at all, not when they are done from a simple handstand on the low bar at the start of a routine. From Jordan Wieber to Mykayla Skinner, pretty much everyone who’s put this in their routine has been consistent with it and finished at a good handstand angle.

So again I propose - why is a routine like Andrade’s doing Giant 1/2, Jaeger, Cast 1/2, instead of just Weiler 1/2 at the start. That’s only 1 move to get deducted on instead of 3, and adds .1 difficulty to the score. Shilese Jones should be doing this too, look at how great it would be for Shilese:

6.6 start value and should be higher execution. She replaces Toe 1/1, Toe 1/2, Reverse Giant, and Double Front dismount with Weiler 1/2 and Double Back dismount. She needs to change up her routine anyway if she wants to incorporate the Stalder Nabieva, because of the pirouette currently planned beforehand. Toe 1/1 + Shaposh + Stalder 1/1 + Pike Tkatchev should be the plan if she doesn’t start with Weiler 1/2.

I think some gymnasts could do it well. Reliably enough to get credit 90% of the time.

Weilers require a core and upper body strength greater than what is average in WAG. It’s why they took so long to to transfer over from MAG. As Skinner, Wieber and Biles have shown, they can be a useful skill for strong gymnasts whom don’t particularly excel on UB.

So jade carey needs one asap. If biles can’t get the weiler full named after her, I’d be tickled pink if the one event Jade gets something named was on UB.

Weilers require a core and upper body strength greater than what is average in WAG. It’s why they took so long to to transfer over from MAG. As Skinner, Wieber and Biles have shown, they can be a useful skill for strong gymnasts whom don’t particularly excel on UB.

In what world do Rebecca Andrade and Shilese Jones not have the strength to do it? Also, I believe Weilers “took so long” to transfer over because they were formerly valued at only C, which made them a bad option for routines.

I don’t agree about needing a huge amount of strength on this move. You can swing your body into it and push off the bar with leg contact. Like I was talking about elsewhere, it’s harder to do a Weiler starting from under the bar, as opposed to swinging down into it from handstand.

If biles can’t get the weiler full named after her, I’d be tickled pink if the one event Jade gets something named was on UB.

The Weiler full is where I’d say this move actually becomes very difficult, a whole world of difference between a 1/2 turn and 1/1 turn here. In the 1/2 turn version you get to bounce up into the turn and into regular grip, whereas with a full turn that extra 1/2 is either going to be happening at a standstill or use one-arm turn kind of action, and you have to travel back to the other side of the bar if you want to stay in regular grip. Pretty much everyone who tries is going to get minimum .3 angle deduction. Although to be fair, getting an E element + full pirouette + reverse grip in one move can definitely be worthwhile. Jade Carey is already getting .5 angle deduction on just her Giant 1/1 most of the time…LOL.

You need the strength to drop into the skill in a controlled manner, though. It’s not a simple drop, swing, bounce like you’re using only the bar, but rather a maintaining of the proper hollow position and shoulder angle to move the right way out of it. If you’re not controlled into that position, you’re not going to see the best results from the skill, and it is not going to move smoothly.
Yes, Andrade and Jones do probably have the strength to do one, but they also already have absolutely gorgeous swing and great basics on the other skills as well. I would agree that the lower rated a skill the less likely it is to appeal when there are easier skills that are more akin to other common basics for the same letter value.

I’m not sure why Jones and Andrade would have the strength to do it? I mean, they might do, but it’s not a given.