What Simone is Up To

Talking of Simone, what’s she doing?

I doubt we see Biles this year. Perhaps she will resume training by year end, but with everything happening and her well known dislike of USAG (and their mishandling of her situation in Tokyo) I doubt she comes back at all.

If she were to come back and I do doubt that very much, it would be for herself this time. This past comeback she said was for the survivors and to act as their voice. I think that was also part of the pressure she felt.

If Raisman and Douglas could make their serious comebacks the year before the Olympics, surely Simone can also do the same should she want to. This time around will be less competition for the team as opposed to Rio and Tokyo. Even a watered down Simone would impact the team significantly.

Simone on two events would still be a powerful influence.

Simone on two events would still be a powerful influence.

I think if they make a commitment to set routines and skills it can happen.
It was fun to see her push herself last quad with all the new skills she unveiled but that was also a bit of pressure and then disappointment with the skill value.
She competed them well but overall her form and execution declined drastically from the previous quad.

I believe doing only two events Simone could return to her 2016 form and consistency. And refine the great skills she has already invented rather than go for more difficulty. Perhaps pick one of her more difficult skills for each of those two apparatuses to do rather than continuing to invent. After all she’s older and has other things she cares about. But ah needs to find a balance that is lacking in her work with the Laurent’s whether she stays with them or not.

If she could do the Yurchenko Double Pike consistently without worry of injury…that alone is worth it. I mean her Cheng is flawless too…She could even drop to a well timed perfectly floated Lopez (like she used to do) and still win vault gold due to the YDP value.

Floor
Drop the triple double. Go back to the Moors, Biles leap, front full to double tuck, full in dismount
I would love to see Moors, and then high double tuck punch front step out into ro bhs bhs Silivas, then full in dismount.

Bars:
Keep the same routine since it was easy for her and dismount with a double layout.

Beam:
Keep a similar routine but dismount with double pike.

Concentrate on execution and sticking dismounts.

She would still be unbeatable.

All I want for Simone is to get the Yurchenko double pike named for her.

Where is this in the COP?

I don’t see back to back disallowed here:

a) Acro Lines
– The maximum number of acro lines is 4.
– Any difficulty in additional acro line(s) will not be counted for DV.
– Any acro element performed after the last counting acro line will not
be counted for DV.
– An acro line consists of a minimum of 2 directly connected flight
elements one of which must be a salto.
 Failure to land on the feet first from a salto will still be
considered an acro line.

Under distribution of elements it says
-.1 each time

A double tuck, punch front stepout straight through to a Silivas would be considered a “long line”.

The deduction is if a gymnast does to acro lines back to back without choreography in between.
So for example, Double layout mount then immediately going into a double tuck as second pass would be a deduction of .1

An IG story is temporary, right? I can’t find it. 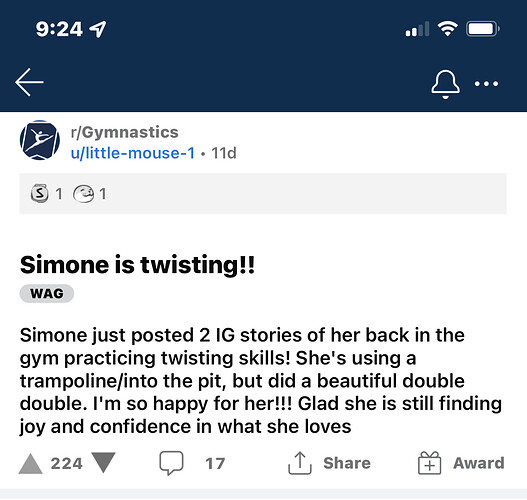 r/Gymnastics - Simone back in the gym today :)

dismount with a double layout.

They are worth the same any way so …

That’s cute. Can you imagine simone the coach?!

Can you imagine simone the coach?!

Ah! I must have read a misinterpretation of it. I admit that this is the first quad since the new scoring system that I have learned the finer points of the international CoP. I said I never would when they removed the 10 and stuck to J.O. rules… so much for holding out on that point, lol.

I mean I think long acro line means that you can do an element, rebound and continue into another element. So long as you don’t stop moving. So I think the back to back pass I dream of Biles doing would be allowed.

Might be a question to ask the Help Desk!