What happened in Team Finals

WTF. Poor Simone. PTSD? AND RUSSIA. Congrats to them!

What happened to China?

They bombed vault. Wasn’t watching too closely other than that.

Does this mean Chow might be available to replace Tom?

I think Tom is definitely out after this.

I don’t dare go on SM during the rumor mill, finger-pointing and rants .

Hoda is reporting on how USA is going on UB. Drama to commence.

Who is this Hoda?

She is Hoda Kotb. She co-anchors NBC’s Morning Show.

Aly Raisman yakking about the “pressure” on Simone. Aly – get a job. Really, just get a job.

Hoda pushing MyKayla Skinner for info on what happened to Simone. And say what you will about MyKayla but she was far more respectful and diplomatic than Aly. She basically just said she did not know why Simone had to bow out and turning the conversation to how the team is under pressure while while Hoda pushed her to say it was the pressure that made Simone bow out.

Genuine good for her.

I hate NBC. I actually hate all of broadcast Television.

i just watched her and was impressed. She really did a great job. I guess those communications classes at Utah came in handy after all.

So, if Simone is out completely, doesn’t that put MyKayla in vault finals?

Yes, it sure does.

Skinner’s hubby being salty. As if Mykayla’s scores would have done it. 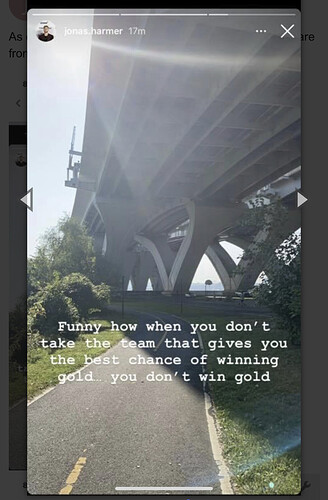 i just watched her and was impressed. She really did a great job. I guess those communications classes at Utah came in handy after all.

I think MyKayla has just grown up a lot over the past year or so. Hoda is a professional ratings/scandal whore. And MyKayla refused to let her draw her into that game. I doubt she learned that in school. She just showed class and respect for her teammate. Aly, on the other hand, sank down to Hoda’s level without even being drawn to it. Its just what Aly has become. While playing the role of compassionate social justice warrior.