Obviously its way early, but who is everyone excited to see this next season? I was born and raised a Michigan State fan, so I cannot wait to see if they can build and improve on what they did last year. Im a little concerned about the next 2 incoming classes for OU, seems like many were injured this year. Obviously Torrez will be a huge assest, but havent seen anything from Seigfelt this year. I know Alabama got a few good classes coming in, anyone else?

OU? They were mainly freshman and sophmores this year if I am not mistaken. They did plenty fine. Still waiting to hear on super-seniors coming back to get a better picture of 2023. I think for me the two programs that I am intrigued to see how they respond is Missouri and Auburn. Both squads are returning basically their starting line-ups. I think Auburn lost only a couple routines. Will they experience a sophomore slump so to speak with some of the energy gone and increased expectations? Or will they grow and actually threaten the big dogs? 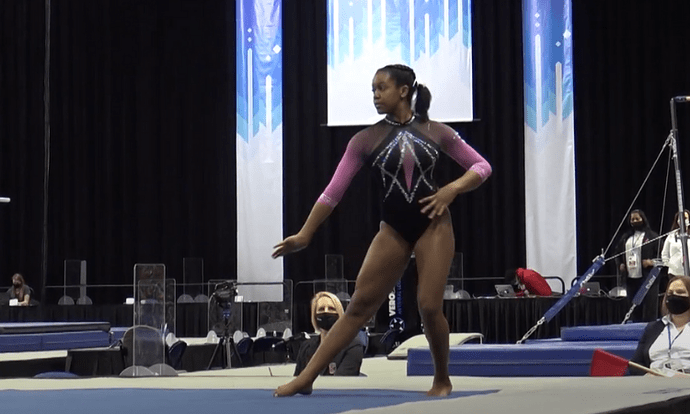 Interesting that Morgan Price, a 5 star recruit, decided to attend Fisk rather than Alabama.

Likely being a HBCU was of interest.

I think it is still too early for me to make predictions based on coaching changes, transfers, and awaiting COVID yay or nay.

Big Ten
Michigan should still be strong, but Michigan State will likely be going after them. I anticipate Ohio State improving but Iowa and Minnesota should drop considering senior losses. Penn State will be one to watch because Sarah Shire Brown is likely on her way out if she can’t produce results. The team was a Big Ten contender and qualified to nationals several times, but they missed regionals as a team this year in 40th and just barely qualified to regionals in 2021. Nebraska is another team that is going to be watched as they failed to make regionals two years now. Especially since they made the last Super Six final in 2018, and suddenly are no longer national contenders.

Pac 12
Utah will maintain or get better with Abby Brenner, UCLA should get better and even contend for nationals next year all depending on McDonald coming in. I am curious to see how Arizona and Arizona State look. Cal is losing some valuable seniors so they might drop a bit. Stanford should continue to rise but losing Bryant is a major loss. Oregon State should also improve since they are brining in freshman bar workers. Washington also should improve with Llewellyn righting the ship after scoring their highest regional score ever this year.

Big 12:
Denver should improve as they are keeping Ruiz and Brown. Oklahoma should maintain from their championship team. Woodard is a loss for beam and floor, but Torrez will improve their depth on all 4 pieces.
Iowa State and West Virginia will be neck and neck with each other. ISU loses some important routines.

SEC: It will be interesting to see what happens here as Florida could have some key losses should Thomas and Reed not return as they already lose Baumann and Skaggs. LSU could improve but let us see how their health and beam look as they are losing several key seniors. Auburn has Suni and Derrian returning but wondering how much the loss of Priess-Johnston will effect them. Georgia will be interesting to watch given all the changes made at the roster level and with Kupets Carter job on the line. Kentucky should maintain as well as Arkansas, though losing Price will hurt. Alabama loses Graber and Duckworth but I am curious if Priess-Johnston will improve the team and get them back to making national finals. Missouri returns their entire team and gets a few strong freshman, so I see them making a run for the top of the SEC and potentially also a run at making national finals.

Others:
MAC- Central vs Western vs Kent State to see who is best out of the conference.
MRGC- Utah State post Amy Smith and BYU without Sadie Miner-Van Tassel, will it finally be Southern Utah’s breakout year?
ACC- North Carolina, what will year 2 look like with Durante?
San Jose State, massively improved but they lose a strong bars coach, so who will Bowers hire to replace him? Can San Jose State get even better and potentially earn a berth to a regionals final? I think they can.

Nebraska is another team that is going to be watched as they failed to make regionals two years now. Especially since they made the last Super Six final in 2018, and suddenly are no longer national contenders.

Brink probably will be gone if they miss again next year, but the problem for Nebraska is bigger than just a mediocre HC. Her first season they made regional finals and they were 19th in 2020, so I don’t think firing her is going to pull NU out of this downward spiral. It’s the lackluster recruiting that became noticeable in 2019-2020. Missing regionals 2 years in a row, mass exodus of athletes in the past 3 years, finishing last at Big 10s in 2021 - all of this compounds the recruiting situation. I predict it’s going to keep snowballing for them to the point that they can’t return to being a top 16 team.

Haley Tyson transferring to Iowa. I thought she would’ve competed more than she did at Minnesota since she was their top recruit in the class of 25’.

There’s a new rumour is that Lilly Lippeatt is no longer heading to LSU. She’s taken LSU out of her Instagram bio and began following a bunch of other programs. Her mom recently posted something along the lines of “you’ll do well wherever you end up” which doesn’t scream she’s still heading to LSU. The LSU forum is saying that she wasn’t medically cleared by LSU and is now looking elsewhere, the same forum was also saying that she’s been on a visit to Clemson.

This is interesting if true, I’m still curious as to what’s up with Sophia Butler. She was presumably dropped by Florida and seems to be heading to LSU, but hasn’t announced a commitment to their gym program. Could she potentially pick up Lippeatt’s scholarship if she’s released from the NLI? However, it would be strange if LSU wants to replace one injury prone former elite with another.

Can LSU take back the scholarship since she already signed back in November? It looks bad on LSU if they did.

Sounds more and more like Thomas and Reed are returning, Rowland needed to free up some scholarships.
Gallentine and Scott seem to be the casualties.

This is consistent with my sources. However, unlike how the gymternet loves to paint a juicy picture of scholarships pulled and Machavallian schemes, Gabby genuinely wanted to compete more and knew it wasn’t going to happen with UF’s roster. No hard feelings, it happens. She was genuinely liked by staff and the team.