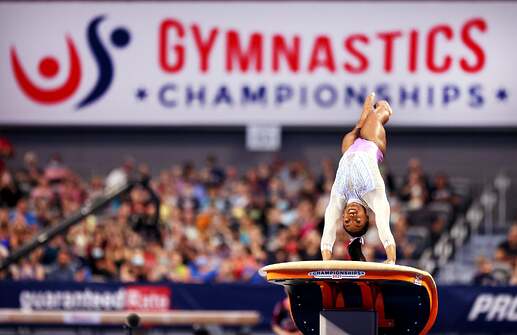 US Women Day 2. Getting this set up early because I may or may not be around Sunday.

All senior routines will be posted on USAG’s youtube after the competition.

Thanks so much Robin

I feel like Suni has proven herself. Does she really need to do AA on day 2?

I wish she wouldn’t. Nationals results are like… nugatory. It’s all about Trials.

I hate that they won’t show the first half hour of coverage.

I’ve made my peace with Morgan not making the Olympic team. I do hope that she does better Day 2, and is invited to Trials. And I hope that Suni and Grace perform great and stay injury free!

With a 4-person team, it really leaves a lot of mystery out of trials. You know likely know who the team will be (at least 3 out of the 4) and it feels like the entire competition is just to fill that last spot and determine alternates. With larger teams, trials was more exciting.

It would be more exciting if the top contenders all hit. I think DiCello, Wong, and McCallum would be right up there with Chiles if they were hitting. But I also don’t want them peaking too soon.

Smart decision. Her knee is in bad shape and realistically she has no shot at the Olympics. She should recover and maybe aim for Worlds consideration.

Aw, that’s too bad for her. I was really rooting for her to have a good comeback. Hope she keeps going .

Sadly, I have another commitment this evening so I won’t be able to watch the ten routines and million commercials, or be the USAG judges on the judging spreadsheet.

Juniors are about the get started. For those who don’t have Flo (myself included), Lauren Hopkins is live-blogging: https://thegymter.net/2021/06/06/2021-u-s-championships-junior-womens-day-2-live-blog/amp/?__twitter_impression=true

Does anyone know if there is a live feed of the senior comp? I’m in California and NBC has decided to broadcast it 3 hours delayed

There is a stream here for juniors I just found if anybody is interested, sorry it took until rotation 2 of day 2 to find it! https://www.twitch.tv/uclavm

I’m seeing the same thing on mountain time–NBC time slot starts at 6, not 5. Did they just decide to air it at 6 local time everywhere?

Cool
I will stop recording

Not sure, we moved from Michigan (EST) to California (PST) and it’s been a bit of a learning curve for when things will air. “Big sports” always tend to air live, TV shows tend to stick to the same time in each time zone and then there are some grey areas. Gymnastics is definitely in the grey area bucket.

Some weird things have been wanting to watch the Macy’s Day parade live on Thanksgiving but it being delayed. Since it’s delayed it starts the same time as football which we also want to watch. I like to watch the puppy bowl on super bowl Sunday but it’s delayed here so it airs the same time as the super bowl. Some things are definitely not fully thought out here on PST.