US Classic to have WAG and MAG!

Is Rosen a classic FX/VT gymnast or did she just have an off day on BB and UB?

Rosen’ is def VT/FX girl, but her UB and BB have improved considerably since her move to TCT.

I think I took a lot on the front half biff and maybe they went a bit easier on it than me .

Shilese ABSOLUTELY should keep the silivas and stop trying to do the double back 1.5

shilese shouldn’t have a face like a slapped arse for not winning! she got in the 5s E on beam!

No shame in being bested by Wong either. Though obviously they’re a bit more competitive than I am.

Shilese is probably frustrated with those falls on beam. If she can channel that frustration and come roaring along at Nats/Worlds, that could be healthy.

So even with the mistakes Jones and Wong look GREAT. Them and Blakey, DiCello and Zeiss looking like front runners for Worlds. Who else in contention?

Absolutely. She is definitely in the same category as Wong and Jones.

I was literally saying to @irichluck21 a few days ago that Nastia had better watch over her shoulder because she will soon be old news and they’ll toss her out to the trash like they did with Elfie.

I think I’m going to have to watch this just for Laurie’s commentary now.

Laurie really was so much better in every way, both technically better and more likeable. I would think Laurie also appeals to a younger audience demographic than Nastia, one of tv networks biggest concerns.

The only error Laurie made (twice) is to call a stag jump out of a tumbling pass a “sissone”.

I guess it’s a sissone with a bent front leg?! and she actually DID one in her olympic floor routine so I can’t really criticise.

Why not replace Tim? I still don’t understand why we need two men and one woman commentating on women’s gymnastics. I would vote for Laurie and Nastia as the two expert commentators.

I would assume she wouldn’t need to do AA at nationals to be invited to worlds selection camp/national team. But she also posted this rather cheeky response to chelsie saying she won’t do all events, so we’ll see… 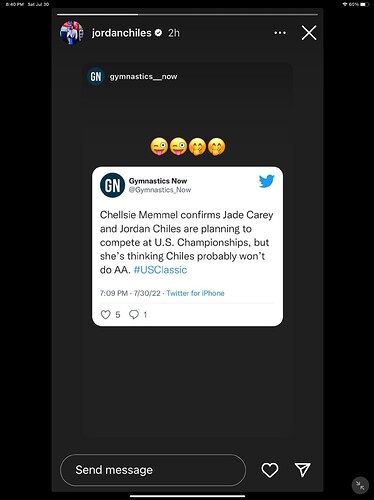 Has the Wong bow proliferated?

Well Wong was giving free bows from her store. GAGE all wore them.
Leanne’s BOWtique.

Leanne's bowtique is handmade hair bows for gymnastics, cheerleading, dance and every occasions. They are lightweight with glitters, can custom to match your outfits and leotards for competition