Unpopular opinion....NCAA has created a mess!

I know everyone is all gaga over all these seniors choosing to stick around and do yet another year of ncaa, but it is going to create a shit show for all the teams for years to come. I totally understand why they thought they needed to offer some incentive to get girls to not opt-out (in fear of committing to compete and then getting the season shut down from covid protocols and ‘wasting’ their eligibility). That being said…the ncaa should’ve put stipulations down for just who is eligible to come back. It should not be that everyone is eligible! It should’ve been made clear that you are eligible only IF your season was cancelled, or a (pre-determined) % of your season is cancelled. This crap of seeing girls from teams that competed 100% of their seasons, up to and including making it to Regionals and/or Nationals is utter nonsense! Why…they competed more of a season than anyone on last years teams and those teams were not eligible. And all this nonsense is mucking up the chemistry and dynamics of what coaches had planned when recruiting. So, who really gets screwed when these girls all opt to stay (and some teams have 3/4 of this years seniors returning). It’s the current juniors who have been waiting for their turn to shine as the seniors. They now share their senior highights. And really it’s every girl who has been waiting for her turn to shine, but now fights for a spot on an overloaded team. Teams now have to finance for overloaded teams…not just scholarships (that may or not be the case with some), but with funding for apparel and for travel (and who gets to travel if funding is an issue).

I know I sound cranky as hell…but really! Did NCAA even think this through??? I know that I am in the minority on this, but this just seems like a horridly thought out idea that someone just ran with.

The season was messed up for everyone. Competing at unattended meets and pretty much in conference only, and dealing with COVID, is not the end to athletic careers that these folks are looking for. It is amazing that it went as well as it did. As things turned out, the 2020 seniors needed the bonus year more, but I think NCAA made the right decision based on what was known at the time.

Next year’s recruiting chemistry was already lost. Between Olympic deferrals, changes in gymnastics due to the weird year and very limited competition opportunities, and all the personal changes everyone went through due to the pandemic… it was just never going to work as planned. But if the coaches are that stressed, they don’t have to give the returners a spot on the team. The athletes get a year of eligibility, not a guaranteed spot on the team or a scholarship.

This year’s group competed LESS than last year’s group, who had a full season up to post season. They only missed conferences, regionals, and nationals. More than half the teams’ season will end at conference championships.

The decision was also made this summer because schools had to be informed ahead of time. At the time of the decision, there was no way to know if winter sports would compete.

Also, yes NCAA gymnastics had a season, but multiple schools declined competing this year, which includes many division 1 schools. Yale did not compete this year for example.

Also, there are more seniors declining an additional year than there are stating they are definitely coming back. Not to mention that this year’s juniors will be senior next year, and while they have the opportunity for one more year I am sure many will not and just graduate.

Yes. And if you read what I wrote I didn’t say that they shouldn’t offer the extra year at all, but that they should’ve put stipulations on it. That it shouldn’t have been for every single person, but that it should be offered to those whose season were interrupted (by a predetermined %) or cancelled. I am not opposed to offering the extra year, just that ncaa mucked up how they went about this

I’m hoping we see a couple graduate student transfers like Michaela Burton (Ark) or Katrina Coca (UK) doing their last years at Pitt. It would relieve teams with potentially bloated rosters and give lower ranked teams a performance boost, but I’m not sure how likely it is we’ll see any of this happening.

And if you read what I wrote, at the time it looked certain that the season would more likely get cancelled than to actually go on.

It is also unfair to make stipulations for certain schools but not others.
It puts pressure on individual schools to compete the season or not.

Also don’t forget that there were around 30 gymnasts who opted out this year, even though their team still competed. Megan Verceles Carr of Nebraska was a three event contributor in 2020 and would have done AA this year but she chose not to this year due to Covid.
Nebraska competed, so in your proposal that would be it for Carr, who is a senior.

Not to mention that when the decision was made, every state had different Covid mandates and restrictions happening, so it was impossible to know what each state would look like come winter season. Look at how strict California was in terms of travel guidelines just a few months ago.

" Megan Verceles Carr of Nebraska was a three event contributor in 2020 and would have done AA this year but she chose not to this year due to Covid.
Nebraska competed, so in your proposal that would be it for Carr, who is a senior."

no, she would’ve met the criteria…did not compete the predetermined % of meets. So she would just apply for the extra year and be approved. I didn’t say the whole team had to not compete. I was also taking into consideration those that chose not to compete for their own reason, OR those that were sidelined due to covid protocols

I didn’t mean I want to see her come back for a 7th(?) year, but that I hope some seniors follow that path for their covid year.

You mentioned Coca and I was just reporting that she said no.

There is a full list here of definite yes, maybes, and NOPE. 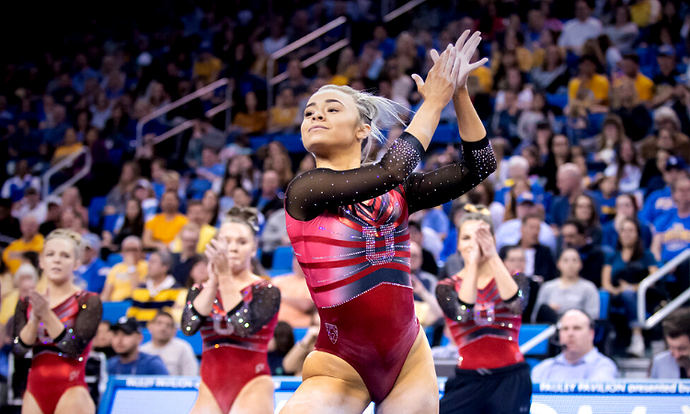 Sorry for the misunderstanding!

I’ll be interested to see how the LSU seniors weigh the disappointing end to their season with their injury/health concerns. Durante probably didn’t want a fall as her final routine and could just do bars for them next year, but Desiderio probably shouldn’t for the sake of keeping her body in one piece.

I suspect Dean to be the most likely to come back if any do, but god, I could live without seeing her gymnastics anymore.

Does anyone know of MACs put a deadline in to accept this extra year? Like if you want to use it you must declare by X date

Yes. I am not sure what the actual deadline is.
I know that they have given them up to a certain point for academic auditing.
If some are close to graduating they might not come back for another year and move on after completing summer or fall courses.
In order to stay on as a student athlete you have to complete certain number of credits a semester. It doesn’t make sense for some to take extra course they don’t need in order to compete. If that makes sense.

This is getting ridiculous

God. I thought we had finally rid ourselves of Reagan Campbell. How disappointing.

Is LSU funding the gymnasts who are on scholarships? I know they don’t count against the 12 but I can’t imagine the school paying tuition for one event gymnasts coming back for a 5th year.