I’m thinking the Stalder and Toe versions should be a D. With the Komova an E. I’m undecided on the Clear Hip (Khorkina) entry.

D-E (both flight or transition) should always get 0.2, IMO. I can’t think of any undeserving connection that shouldn’t.

I still like them being an E, I just think they need to remove the cap so that the Komova is raised to an F (as well as the Seitz). Unless you think the Maloney and Chow should be at a C. I know some would like the Maloney at a C since the Ray is valued lower than the Ricna and Hindorff.

There’s only one khorkina being done right now, am I right? and I can’t even remember who it is.

I wouldn’t say that free hip skills are particularly harder than toe on skills it’s just there is a broader emphasis on them due to the progression to piked stalder. Certainly we see far more of Maloneys/Van Leuwen than Shaposhnikova/Khorkina

I feel like this should rely on a baseline assumption that a toe-handstand is easier than a stalder or clear hip handstand, which is sorta odd. In my experience personally as well as just a general progression of skills that most gymnasts go through, I’d say the progression is more like clear hip > toe-handstand > stalder. But, I don’t know if it’s really worth distinguishing all these tkatchev variations based on the root, other than say, in-bar stalders which are a class above. ¯_(ツ)_/¯

Elena Dolgopolova did it in 2000. Jaeger-Pak- Shap 1/2. Whole routine was ahead of its time

I can only see evidence of her doing a Clear-hip 1/2 pirouette out of the Pak, not a Shap 1/2. Where did she do it? Only competition listed for her in 2000 is Russian Cup. Either way, that would be one single attempt as compared to the thousands of Stalder and especially Toe shaps we have seen out of Paks and Ezhovas. There’s an obvious reason why.

Kurbatova has connected the Shaposhnikova 1/2 out of a Pak salto, but more often than not, the connection was broken. 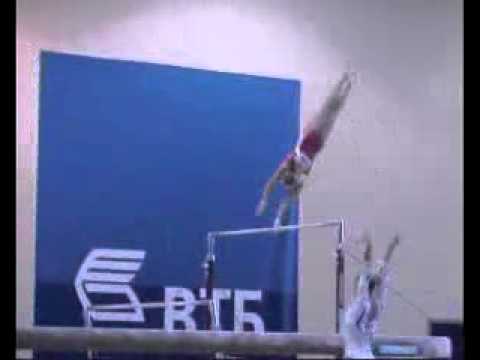 I think GB’s point stands tho, even if you’re so gymnerdy as to know who was doing this out of all the gymnasts evah

C+ element = .35 value, D+ = .45, etc. Give a .05 boost to Clearhip and Inbar shaps done out of flight moves, since those connections are more difficult. Can also have a .15 connection bonus on the table, because why should every connection be .1 or .2, might as well make it as specific as possible.

The connection value table as a whole needs to be rewritten to give more reward to doing moves out of a transition to the low bar. Bring back the interesting sequences like Pak + Stalder 1/2 + Stalder shoot (also need to restore the value of the shoot skills). Doing a full pirouette out of a Pak/Bail is also something that should be highly rewarded.

I can’t imagine skills between C and D ever being accepted by FIG.

@GymBeauty The bars bonuses could be simplified AND set up to reward the connections you want to reward. Here’s the entire rule. Try out a bunch of examples to see.

Video of Dolgopolova from 1999 below. I do remember her 2000 exercise being different and exciting, but I don’t remember the connection @MaryClare mentioned, and I can’t find video.

It sounds like you would remove connection bonus for pirouettes? Can’t agree with that! I think even a Cast 1/2 + flight to high bar deserves a .1 bonus, because so many times people will go too far over on the Cast 1/2 and have to do another cast before they can do the flight move, there’s definite difficulty in that connection. Plus the Cast 1/2 itself is an element that invites more deduction, without counting for any difficulty score. The rules really ignore a lot of these intricacies in the evaluation of routines.

It is interesting how kip cast handstands and especially handstand 1/2 pirouettes are a huge deduction trap even for top level gymnasts who general avoid all but one or two instances of it; I honestly wish more flexibility were allowed for in routines by allowing for a “dead” swing or even an under-bar 1/2 turn which in many cases can be a simpler and more visually elegant way to change directions.

Shilese has a nice one https://www.instagram.com/reel/ChJ_HAnlckK/?igshid=YmMyMTA2M2Y=