The most valuable tumbling pass in WAG

I saw this video today:

It got me thinking, taking both difficulty and execution into consideration, is that stuck Biles II the most valuable tumbling pass ever performed in WAG?

But has there ever been another single tumble that was so valuable to a gymnasts score?

Even a whip - triple - punch front, done with zero deductions, could only ever net +0.9P. And we have never seen a deduction-free version.

Aly’s first pass came close. When she stuck it, it was worth CE4 = +1.2P, less 3 tenths for legs in each skill, so +0.9P net, but it used two of her eight skills and not just one; so apples and oranges.

Good question, I’ll have a think.

I think Postell would be up there with the best to do the whip-triple-punch front pass, though of course she was pre-open ended code. What would you take on this one? The video quality isn’t great, I had to watch it a few times before being sure it was a whip. 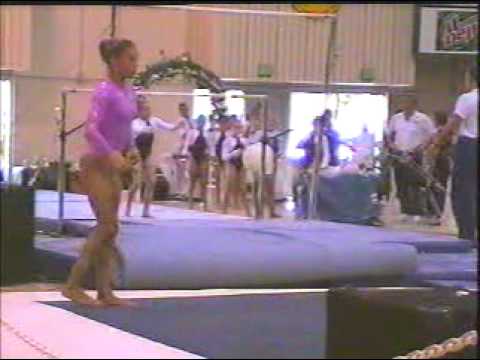 Wonder if she ever stuck it?

Aly’s first pass came close. When she stuck it, it was worth CE4 = +1.2P, less 3 tenths for legs in each skill, so +0.9P net, but it used two of her eight skills and not just one; so apples and oranges.

What was Izbasa’s triple combination tumble worth? I think it was 1.5X-straight front full-tuck front full. Falls down for the same reasons as Raisman’s but I’m curious to compare it now.

Wasn’t that .9? I remember it was almost double than a full in or a triple that was one of the reasons people were very upset by it

Seeing that floor from Postell makes me sad because she was such a talent and then 2004 was such a bad year for her. She had bad bars both nights of nationals and finished 13th and eliminated from Trials.
IMO she could have been the factor on the US team in Athens to help them win team gold. The US lost due to beam and floor and that was Postell’s strength.
Though it would have been hard to place her on the team instead of Humphrey or Bhardwaj. Hatch was going to go because of the big DTY and her ability to win a vault medal. But I wonder if Postell did trials and hit if she would have replaced Hatch or Bhardwaj. Probably Bhardwaj since they had similar strengths, though Postell struggled on VT in 2004 IIRC and had lost her DTY and was doing 1 1/2s

Aly’s pass may take up two elements but it also gets pretty much any CR any code might require - she’s got both directions, twisting, and a double salto all covered in addition to getting a connection in. I think I’d choose it based on that; it frees you up from a lot of composition concerns.

What would you take on this one?

Great! Probably one for legs on the triple and the tenth step. I wouldn’t deduct amplitude.

I thought Postell made trials, was too injured to perform at her best so pulled out so that Katie Heenan could go?

Wasn’t that .9? I remember it was almost double than a full in or a triple that was one of the reasons people were very upset by it

It’s an interesting routine construction/COP debate, do we want routines with big skills or combinations of simpler moves (i.e. most current beam)? The latter is difficult in a different way and can also demonstrate mastery. Certainly I don’t remember this combination tumble proliferating. Izbasa also had a full-in and triple so it didn’t bother me.

This reminds me of the beam dismount debate. Should you be able to win Euros with a full? Does it matter if your dismount isn’t up to level if the routine as a whole is good enough to win? Did the FIG say they didn’t want so much of the score to be about the dismount when valuing Biles’s 2X2X from beam or was that gymternet speculation after their “it’s dangerous” press release?

I thought Postell made trials, was too injured to perform at her best so pulled out so that Katie Heenan could go?

No, Postell finished 13th at Nationals and was first alternate for Trials. Nicole Harris withdrew (can’t remember why) and Postell was invited to Trials. She declined and Heenan was next in line.

FWIW, Postell was supposably very upset with Heenan. Story is they made a pact when they didn’t finish high enough for Trials that they would decline invites if anyone withdrew.

Postell had two bad years didn’t she? She was an alternate at Worlds in Anaheim and got the call because of injuries to Hatch and Kupets. Then she got the flu. I saw her walking beside Hatch who was crutching through the crowd.

But we got treated to Chellsie having a great performance.

Postell made the team, but had to withdraw because of the flu. Kupets, Schwikert, and Vise automatically qualified to the team based on Nationals results (top 2, but Schwikert and Vise tied for second), with Hatch, Patterson, and Postell added following the selection camp. Humphrey and Sheehan were the original alternates. Sheehan was replaced by Memmel due to being injured (likely the fractured toe which kept her out of Nationals).

Humphrey was also 1st alternate and Sheehan was 2nd alternate. Memmel was the 3rd non-traveling alternate (who went to Pan Ams).
Once Sheehan withdrew Memmel moved up to 2nd alternate and flew to Anaheim. After Postell was sidelined with the flu, Marta named Memmel to the team over Humphrey. Then Hatch blew out her knee and was replaced by Humphrey. Kupets’ injured came on floor in the final rotation of team qualifications. So she couldn’t be replaced at that point, not that it would have mattered because they had no alternates left standing.

I can’t believe we all chalked up this many injuries as the nature of the sport at some point.

^ it’s a good point. If its just natural that one or several of the best gymnasts in the US will be injured over the next several weeks… In what world would you take those odds, for you or for your children?? At what point do you introduce the “even if you have the talent and genetics and work ethic, there’s just a 33% chance a bomb will drop on your dreams” reality into your game plan and psyche? And why?

They still do when you accuse the club gym/nation/NCAA program with gymnasts they like of not being a heathy environment with a horrible track record.

The Texas Dreams stans swore up and down through Key, Smith, Hults, Malabuyo, etc that anyone who spoke negatively of Kim was a hater, bitter, ignorant, etc because “the girls look so happy.”

This thread took me down memory lane: Postell and Nicole Harris are in my top 5 for unmet potential (yes Postell has her world title, but still).

Back to the original question: I can’t think of anything that matches in terms of value. Has anyone ever competed a whip-double layout-punch front? I’ve had some fantasies of Chinese gymnasts doing whip-3.5+pf for the massive value, but i don’t think we’ve ever seen that combo from a whip.

Something I’ve always wanted was for there to be a way for gymnasts to utilize multiple ways of getting cv into one pass (I.E. 1.5-front layout-double front for .4 or front full stepout through to whip-triple full for .4) but I don’t think the code would actually honor that as cv. They should though!

I’d forgotten about Nicole Harris! Such a stylish beam worker. The routine from the 2004 podium meet is exquisite.

I don’t think the code would actually honor that as cv.

Yes they don’t allow “nested” connections like that. But you’re right, a 3/2 through to whip triple full should absolutely get more than 0.2 CV!

Whatever happened to Veronica Hults? Did she ever make it to the senior ranks?
I legit forgot about her.