The logic of the US Developmental Compulsory Program

Ok… so this conversation is going on over at a different forum. What is the US trying to teach as a whole by putting this sequence in at Level 3 in the Developmental (formerly JO) Program?

What is this a progression for? Is there something in that sequence that is going to help develop bars like Suni? 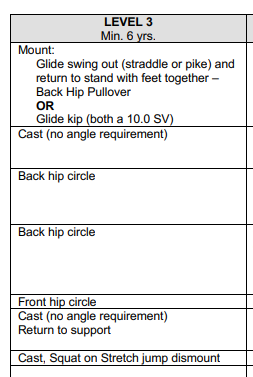 admittedly, I’ve been out of coaching competitive kids for years…

Ugh, this makes me so angry.

Isn’t it to learn to stop and control the circle movement?

What does everyone think of the new compulsory program? I'll add my opinion on it when I have a bit more time... overall... many positive points. The link to the program is...

That’s what I said… then I went and tried it with some athletes… it sucks. I think the judges will hit it with random deductions like… “not completing the second back hip circle before moving into the front hip circle”.

Can the athlete rest on the bar between the back and front circle?

Yes… I would assume so… however… there haven’t been any meetings to go over the routines yet.

The stop + front hip circle…honestly, pretty sure it’s just a “hold over” of “needing” another skill in the routine.

If I remember correctly, there was talk several years ago about the front hip being first in the level 3 bar routine this cycle. There could have been a rhythm there with kip into front hip, cast, back hip x 2, but at some place there still has to be a stop if there is going to be a cast squat-on straight jump dismount.

If you coach or judge little compulsory kids, you know how scary that jump to the high bar can be in level 4; so I am all for kids learning to squat-on, find their balance, and jump as a progression before trying to catch the high bar too.