The Dark Side of Fandom

Olivia Dunne’s popularity is well-known but the fandom has its dark side. 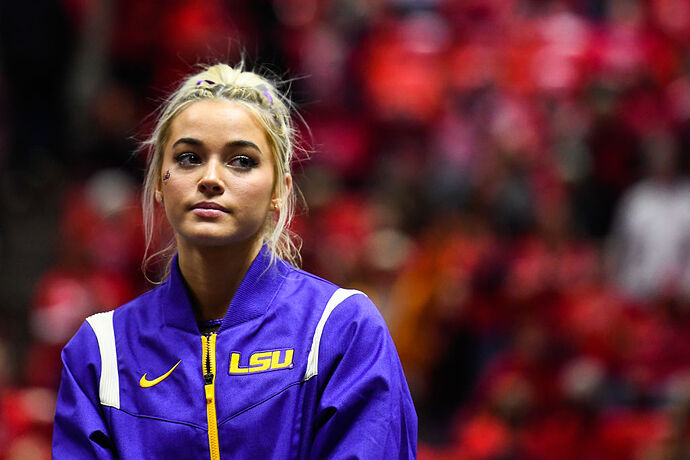 As LSU gym traveled to Utah for its season-opener on Friday, a group of Olivia Dunne fans allegedly treated Utes athletes with disrespect.

Welcome to the world. She has earned enough to hire security.
Man being disrespectfull, well that is also nothing new, what did they expect. Sounds like whining to me.
Might sound harsh, just cannot get on board with “influencers”. If she is so influencial maybe she can get those boys to behave, you know, by influencing them?

If she is so influencial maybe she can get those boys to behave, you know, by influencing them?

She did ask them to be respectful in the future.

None of this is Olivia Dunne’s fault. She can’t be held accountable for her fans, many of whom are unlikely watching her gymnastics too closely. Looking at some of the responses it is clear several of them are perverted responses, which is sad and disgusting.

There are dark sides to any fandom, celebrities will tell you this.

Shannon Miller had a stalker and this was before social media. 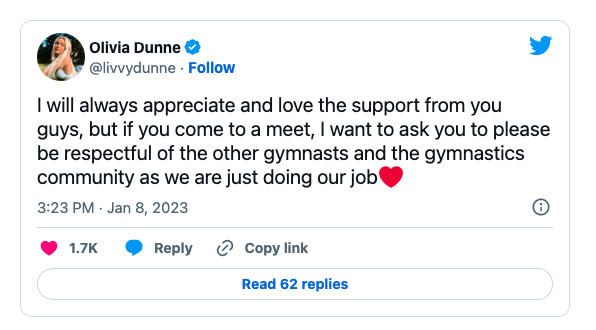 From Sam P’s TikTok when she was leaving the arena.

Cause and effect, understand your actions create responses, both good and bad. You want to be like Kim Kardashian use your sexuality to sell and market, absolutely! You be you, I’m not going to shame you for that. But dont act innocent and shocked and claim you have no ideal why weirdos are acting this way.

To be accurate here, Olivia isn’t the one complaining. It’s other people associated with the event who are not excited about having to run this gauntlet to go home.

This is victim blaming at it’s blamiest

And just read a few of the subsequent comments, and they are in the same vein

If you earn money by selling photos of your arse you will get a lot of ‘fans’ of photos of your arse not gymnastics fans. That has been totally her choice and there is no blame there, that is a marketing decision of hers and one she is entitled to make. But those actions led to these actions. Not victim blaming just cause and effect.

Nothing excuses creepy entitled disruptive behavior, whether she sells butt photos or has an OnlyFans like Ashton Locklear. Especially when they’re treating other gymnasts like shit because she’s not the one they want to see.

There’s a rather large step being missed out here between being a fan of someone’s arse and behaving like those young men at the arena did the other day. Plenty of people like looking at scantily clad photos of whoever they find attractive and then still manage not to be obnoxious, if we’re talking about cause and effect.

However, the NCAA can’t opt out of the societal effects of entitled male misbehaviour. So now that more athletes are going to be monetising their appearance, maybe this will have an impact on security for competitions.

I’ve just been wondering at what point does her right to gather these types of followers supersede the right of other gymnasts to compete in a safe environment. Meaning if you look at her SM the comments are simply gross. (like the bath water and mommy stuff) And she does not shut them down, because they make her famous and make her money. So that is encouraging to them. Which hey- if that is what she wants to do to make money, well have at it. But now it is affecting people who DONT do that and DONT want to make money off of that. So they suffer and she continues doing herself and making money. They don’t profit but she does. They have to deal with the consequences of her fans with no cash. Doesn’t seem right to me.

Weird internet “fans” are a downside of the internet and it doesn’t seem to matter what you are selling. Young and beautiful women will attract odd people no matter what. But I also know of old, “average” women with small YouTube followings that deal with security issues and creeps.

I hope that young athletes are advised to consider these issues and make informed (or semi-informed) decisions about the potential downsides of internet fame.

And this is all new territory, lots of things being ironed out.

I do feel sorry for the people who were negatively affected by this who aren’t even getting the financial benefits from the fandom that Livvy is, that’s a good point.

Yes. They are the real victims here and no one seems to want to acknowledge that. The focus is all on Olivia- poor her blah blah blah. But this incident just fuels her fame and makes her more money. The true victims suffer for her “career” choices.

Do they not have any security at college events?

I’ve been to some Utah meets, regionals and Pac-12 at the West valley arena. I have been to Nationals plus Olympic Trials. The only security I’ve seen at an NCAA match was at the doors. USAG does of course.

This is an unprecedented problem. I don’t like to speculate how bad things have to get. Even Suni didn’t have this much attention.

She has deliberately marketed herself to a certain subset of individuals. She interacts with them online in a way that encourages gross comments etc online. She likes posts and responds with laughter to them wanting her to be their mommy or buy her old bathwater. She knew what she was getting into and she has no reason or incentive to do anything but encourage more of the same because she makes more and more money off these perverts and degenerates. This is her right to live her life like this and engage in these choices. However, she clearly doesn’t give a single hoot about how it affects other individuals or athletes and I am willing to put money on the fact that she could care less that Utah gymnasts were verbally sexually assaulted by her disgusting followers. The publicity is nothing but good for her. Now more pervs will follow her and make her more money. Who cares about anyone else when she is making money right?