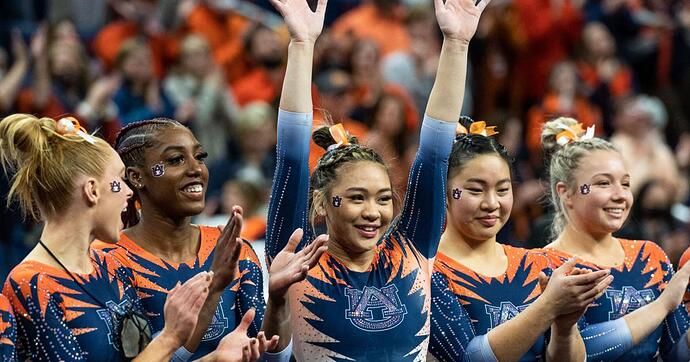 The Auburn gymnastics team is opening the season in style, competing in Las Vegas in January in a made-for-TV event that’s the first of its kind in the college gymnastics

With the last few national championship teams this will be one not to miss.

So apparently each session will have a team champion.
I am guessing they will be seeded according to ranking.
It appears the 7 lowest ranked teams plus Fisk are on day 1 and the top 8 ranked teams are on day 2.

Hoping for UCLA, Michigan, Auburn, Oklahoma in the final session which could be a mini preview of National finals (minus Florida)

This will be fun to watch while chatting/posting.

This will be fun to watch while chatting/posting.

Is it being broadcast anywhere?

We don’t know where her but I’ve seen tv times mentioned in several places. ESPN would be stupid to not get it.

Big 10 Network is a partner. Maybe that’s where.

UGH I don’t have Big 10 (yet).
I am dropping cable though and subscribing to FUBO with the add on sports package. it will be half the cost of cable and I’ll get all the sports channels I want.
Planning on doing this December 21, so hoping it’ll be on Big 10 after all.

Also wondering if more schools will sponsor gymnastics. I can see USC adding it since they have a strong club program already. Also Indiana and Wisconsin had gymnastics teams in the 80s.

Maybe I should check out Fubo. I usually get Sling for NCAA season.

Big 10 kept their name despite all previous expansions, I can’t believe they would change now. B1G for life.

On the Big 10 + channel. I downloaded the app and looked.

Missed this earlier, so responding now:

Not sure what the plan is, but Big 10 is current divided into East and West, 7 teams each (Purdue is currently in the West). So this relatively minor shift you make the most sense. The current West teams will probably scream about the travel, but nobody was happy with the old divisons, which were designed to not have all the top football programs together. So now they’ve gone geographic, and the East is much stronger. Ohio State, Michigan, and Penn State in the same divison is tough; the Rutgers and Marylands of the world don’t love facing those teams every. single. year.

Very excited for this meet. I hope it’s good. BUT…

Look, I get that it’s 4 sessions, but when your cheapest ticket with a promo code is $96.11 + fees, you’re pricing lots of people out (and general public tickets starts at $111). $44 + fees and up for single session tickets. This isn’t growing the sport.

They’d probably make up the difference with people feeling more willing to spend money on concessions and apparel if the tickets are a little cheaper.

Obviously the Sat night session is the main draw, but UNC vs UW, UGA vs Stanford vs OSU, and Cal vs Iowa should be really interesting openers. I’m hoping Stanford’s freshman make an immediate impact.

I was absolutely shocked to see Dana Duckworth commentating session 3 with John Roethelisberger, especially after Laurie Hernandez had covered the others.

Wonder what is up with that?

That was the one session I did not see, but while I love Laurie and her general enthusiasm, if she is going to do the color commentary, she needed to work on her critiques. Everything was, that was amazing, so beautiful, etc. Not too much, she missed a connection, bent legs, she was trying to do this skill, etc. Reminds me of Bridget Sloan when she started commentating.

It didn’t help that Roethlisberger was not treating her like a colleague and peer, often times I cringed at some of the stuff he would say to her.

There was one gymnast, I think one of her former teammates, and John said something like “Did you treat her nicely?” and Laurie kinda of wasn’t sure how to react and said, “I think I did, I hope she thinks so.” and John replied, “I’m sure you did.”

He definitely treats her differently than Sacramone or Sloan.

He treats her differently because she’s an amateur. I’ve just caught up with the meet. I had to mute it, Laurie is unbearable

He treats her differently because she’s an amateur.

He was an amateur at one point too.
Instead of being pompous, act like a mentor.

There is zero excuse for the ridiculous questions or silly comments toward her.

Grow up and be a professional. Laurie was no Kathy, but she is trying and has limited experience.