Besides telling us what it’s like to do it all again as the GOAT we might find out if the Y Double Pike will be the Simone ll vault.

When the pandemic delayed the Tokyo Olympics, Simone Biles made the reluctant decision to train for another year. Tomorrow, an interview with the 23-year-old gymnast as she prepares for her final Olympics appearance. cbsn.ws/3ahbw5t https://t.co/YE38OBK0CZ
2 Likes
JaJa February 14, 2021, 3:48pm #2

holy crap! She could do that tucked and add a full twist… it looks that easy for her! 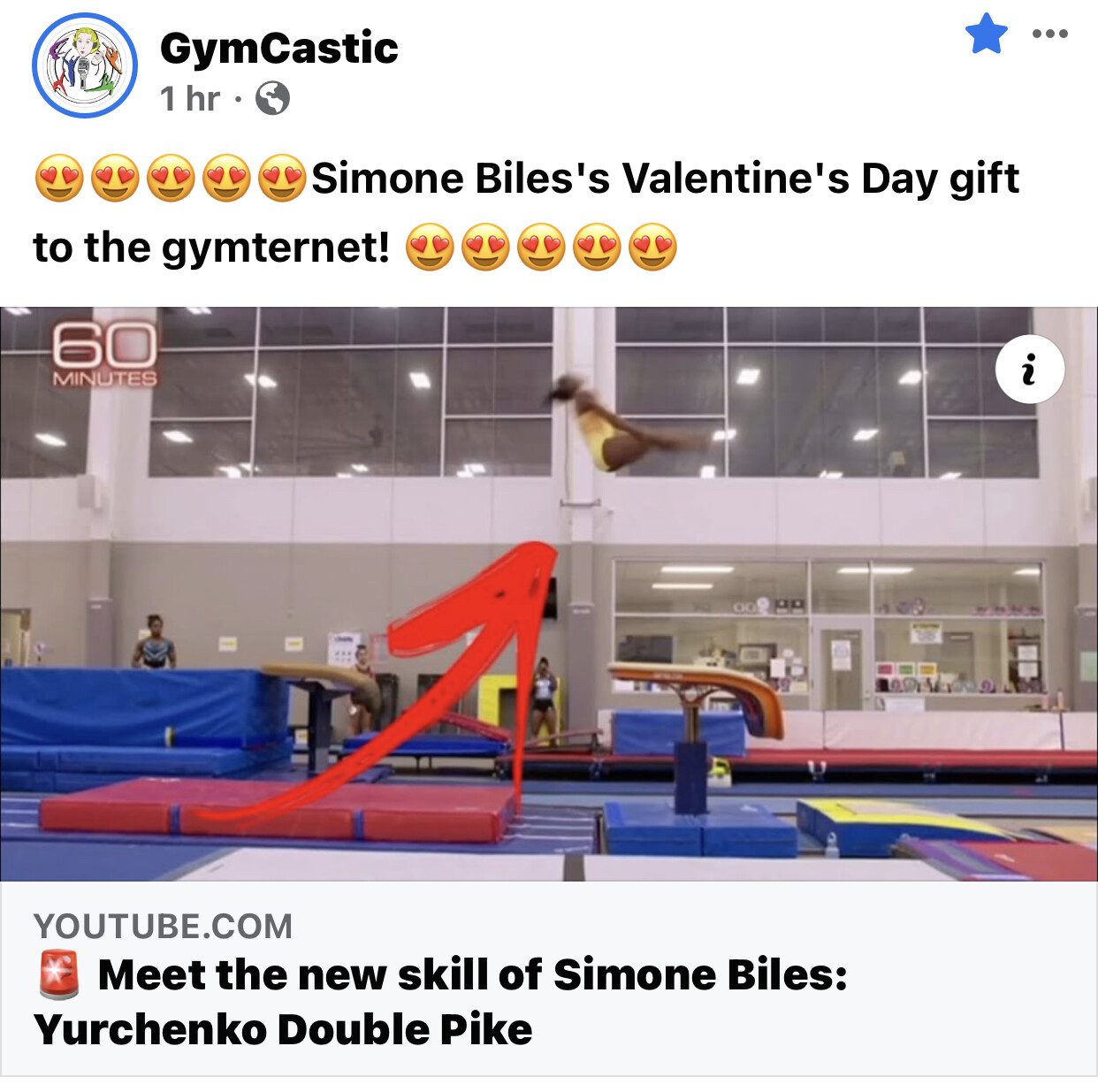 This vault is just absolutely the best thing I’ve seen! Simone could redeem the Olympics.

Ignore the arrow and look at the height.

THIS BETTER NOT BE UNDERVALUED.

Between the Yurchenko double pike and her calling out USAG for the Nth time, Simone continues to show she is the G.O.A.T.

Oh my. GOAT no longer says it. There has to be some greater accolade we can come up with. A title never used before.

Her FIERCENESS, the GODDESS of all goddesses, royal Simone, the owner of ALL triple-doubles, double-double dismounts, the everlasting BILES, triumphant.

Will she keep her same bar routine? I wonder if Laurent will try to get her a UB medal. It’s the only Olympic medal she doesn’t have.

Do you really see Simone getting a medal in UB? I do not think it is worth putting in the training for and/or upgrades for something that will not happen.

Though, that said, I agree that it’s highly unlikely they’ve been training with a focus on bars or an intent to contend there.

If it is true that this will be her last Olympiad, I hope Simone goes out with a gush of glory and victory !

I think Biles has a legit shot at a bars medal. If she could make that one connection out of the Pak, she’d probably be a top contender, actually.

She was 2nd in 2018 and 5th n 2019. I think UB bronze is wide open but Fan Yilin making her 2nd Olympics might likely change that. I don’t think anyone predicted that Sophie Scheder would win bronze in 2016.

@JaJa definitely not “highly unlikely”. She was a stuck dismount from bronze in Stuttgart, and she won silver in Doha.

Her Pak is good. I’d be surprised if they weren’t at least trying the connection for the extra 2 tenths AND losing the kip cast.

The problem is that the rest of the world has spent 2 years upgrading THEIR bars. If Simone has the same set then she will be left behind.