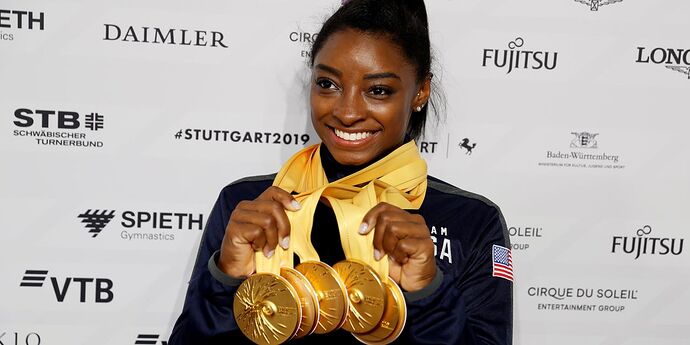 Gymnast Simone Biles will have her own performance wear line and activist platform at Athleta.

The relationship, which was announced Friday, is a major coup for the smaller, women’s activewear brand, which was founded in 1998 and is owned by Gap Inc. It comes after Athleta signed a partnership in 2019 with sprinting champion Allyson Felix, a former Nike athlete who had criticized the company for failing to support pregnant athletes. It also comes days after Nike’s partnership expired with the estate of basketball player Kobe Bryant.

Biles did not directly criticize Nike in an interview, but emphasized what had attracted her to Athleta.

“I felt like it wasn’t just about my achievements, it’s what I stood for and how they were going to help me use my voice and also be a voice for females and kids,” she said. “I feel like they also support me, not just as an athlete, but just as an individual outside of the gym and the change that I want to create, which is so refreshing.”

A Nike spokeswoman said that “Simone Biles is an incredible athlete and we wish her the very best,” and that “we will continue to champion, celebrate and evolve to support our female athletes.”

With Athleta, Biles will have her own performance wear line, including products for wearing to and from the gym.

She said the company has also pledged to support the post-Olympics gymnastics tour that she is planning to mount herself, rather than the usual tour backed by USA Gymnastics, the sport’s national governing body. The tour could help reshape professional opportunities for elite gymnasts for years to come.

Athleta and Biles said that the company would give her a platform to be an activist participating in “honest conversations” with women and girls, and that she felt that with a predominantly female design team, she was joining a company that was “truly for women by women.”

Asked if she felt that she couldn’t have had her own line at Nike, Biles said: “Not necessarily, but I also feel like Athleta is committed to diversity and inclusion, of all women, backgrounds, ages, sizes, abilities and races.”

Over the years, a number of athletes have left the packed endorsement roster of Nike to be the face of another brand.

Biles is considered to be a “Greatest of All Time”-conversation athlete, dominating her sport for an extraordinary eight-year run with new skills that are unprecedented in difficulty. She has done many of her increasingly audacious feats at a time when she is also speaking out as a self-identified victim of abuse in gymnastics, remaining a recognizable figure in between Olympic Games cycles.

Within Nike, however, she has not been a major face in recent years. In an ad aired during the NCAA basketball tournament celebrating Black female athleticism, she did not recognizably appear at all, even as the ad included close ups of tennis players Naomi Osaka and Serena Williams, runner Caster Semenya and fencer Ibtihaj Muhammad. Biles has had only fleeting moments in other recent ads.

Nike has also been dealing with reports about its workplace culture for several years. In early 2018, a group of women circulated a survey to protest inappropriate behavior by men at the company as well as pay disparity and gender imbalance in the top ranks.

Nike said that it continues to support women and girls through investments in coaching and scientific research, as well as a think tank to help Nike understand the experience of female athletes.

It said that it has the largest roster of female athletes, and that its policies for pregnant female athletes have evolved and were expanded in 2019 to guarantee pay and bonuses for 18 months around pregnancy.

Biles said that when she was younger, she “totally” believed that Nike was a good place to be a female athlete.

“But now that I’m older and kind of in the world a little bit more, I see and I know and I learn and I grow from things, so to partner with Athleta, I think they stand for everything that I stand for…I just thought it was time for a change.”

“When Allyson joined our team, we recognized right away how powerful this was for the brand, but we also recognized how deep that relationship went…And so as we were thinking about, ‘Who do we want to partner with, who is out there in the world?’ Simone was an obvious choice just from the beginning.”

Biles and Felix are likely to be two of the most prominent athletes at the Olympic Games in Tokyo this summer.

Athleta said the discussions with Biles prior to the announcement had all been carried out by Zoom and telephone discussions, and had included Athleta discussing its company culture. It says its workforce is female-led and 97% female overall.

Neither Athleta nor Biles commented on the value of the new Athleta contract.

Biles’ Nike partnership began in 2015, just as she opted to forgo a college scholarship and turn professional.

“It was obviously super neat at that age to sign with such a big brand,” said Biles, who was 18 at the time and is now 24. “But now I feel like it’s so much different because I was the one that got to sit down and speak with the team and decide, yes, this is who I want to go forward with, this is the team I want to work with.” 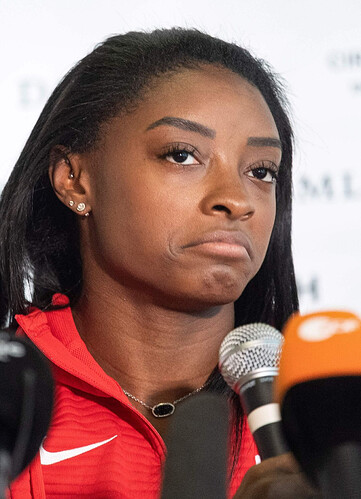 Such a good move for her. I wonder if they’ve given her equity in Athleta.

It’s super into the body-positivity thing. I walk past their fifth avenue store front every day. All the mannequins are plus sized. Well, I say “plus” sized. They look plus-sized compared to normal mannequins but no one is shaped like a normal mannequin!! I get body dismorphia when I look at the “Under Armour” male mannequins, built like a fucking 6ft7 linebacker!

Awesome move for her. Nike does basically nothing with gymnastics so the only reason to stay with them would be the big name. Her own line, backing for her tour, and a company that aligns with her ideals is a win on every level.

Also that picture of her might have to be my new avatar lol.

They probably have exclusivity deals so that you can’t work for competing apparel brands at the same time.

True. Nike does nothing with gymnastics. That should change. There should be a new Nike leo range.

Perhaps you have a point there.

They probably have exclusivity deals so that you can’t work for competing apparel brands at the same time.

I am sure they do

At 4 min she does a quad Wolf turn. Is this a serious attempt?

I imagine it would only get an E right? But would she get it named?