Simone in New York (and other post-oly fun)

She said she’s leaving it open whether she would be back! “ Looking ahead, Biles told Hoda Kotb on Wednesday’s episode of Today that she is “leaving the door open” when it comes to the 2024 Games in Paris. Simone Biles Celebrates Her Return from Tokyo Olympics with Ice Cream — and... 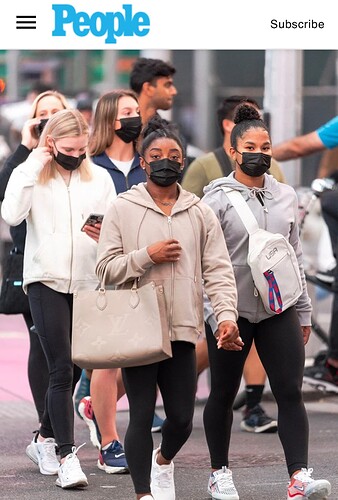 Good for her. If I were her I wouldn’t make any decisions for like a year

At least. I expect she’ll do the tour, go on vacation, go to some NFL stuff, stop by the gym to see who is doing what, start noodling around on an event, rediscover how much she loves gymnastics, and then start training at least an event or two.

Yeah she had already said she was thinking about Paris.
Her mother is encouraging her to do so even as an event specialist and also she has stated she would love to take Laurent and Cecile, French Olympians to a home Olympics.

I think she’s a lot more likely to go for Paris than if Tokyo had gone as expected or even a bit below expectations. I think that the not being able to compete for the most part is going to bug her more than if she had been able to compete and just didn’t win 4-5 golds or whatever.

I just want her to get the Yurchenko double pike named after her.

Are there room for specialists on the team in Paris?

It’s back to 5, so definitely. Particularly if you’re talking about Simone-level VT/FX.

I think they’ll still want specialists to have basic routines on all events that could go up in a pinch, even with 5-3-3, but a specialist only lightly training other events and with the scoring potential of Simone’s VT/FX would definitely be in the conversation.

Especially if there’s a strong UB/BB athlete to complement her.

And, not to knock the current group of US juniors and newer elites, but they only have 3 years to get up to Urazova/Listunova level and thus far, no one has really shown that potential. Simone on 2 events (three probably because I’ll bet she wants another shot at that BB final) is a great addition to any team.

Of course, Valentina has 3 years to break Listunova and Urazova so maybe steady but not spectacular will pay off for the US.

It’s too bad the AA didn’t work out for her. She’s def worthy of being a 2-time Olympic AA champ.

It’s too bad the AA didn’t work out for her. She’s def worthy of being a 2-time Olympic AA champ.

In my mind she is any way. No matter how things worked out.

Yeah, she won qualis on her worst day about ever. If she hadn’t gotten twisties, I have faith she would have dug deep and really fought for every tenth in the AA. And had a more usual performance (still with probably at least one OOB on FX)

Agreed but she’s not the AA champ. The history books won’t show Simone as champ X2. I think Suni is a lovely and worthy champ.

Simone is champion of champions even if she doesn’t have a title for “2020 AA”.

Yeah, I’m not looking forward to years of invalidating the accomplishments of the medalists with the “Well, if Simone was there…”. It was very unfortunate that she wasn’t able to compete for the majority of the Games, but her having a very ill-timed case of the twisties isn’t any different than if she had pulled an Ashley Priess. Sunisa, Rebecca, and Jade’s golds don’t mean any less or not count.

I think there are quite a few competitions where the best gymnast in the building isn’t the actual winner. And it makes for fun debate and what if scenarios but also doesn’t diminish the accomplishments of the winner.

In other news, Simone got out of advertising jail a few days ago–started seeing ads featuring her again.

It took me years to actually be ok w admitting that Raducan isn’t the 2000 AA champ.

I wish Simone could have competed in AA if only because she has looked beatable this year. It might have been a fight and I would have loved to see that. But as it was, Simone was unable to compete, Suni won AA.

That situation is a little different. She competed, she won, had the medal ripped away the very next day for being given cold medicine by the team doctor who should have known better, and then the same drug being taken off the banned list the next year.

And that was after a critical apparatus error that didn’t affect Raducan because she hadn’t vaulted yet (IIRC).