This is super clean, even under FIG rules, I think.

Using Classic 10.0 rules This was given a 10.0 but, to me, it’s 9.85 — two hand adjustments (she really has a bad habit of doing this on every cast) and a leg separation on the Van Leeuwen. But still a great exercise.

Using FIG rules 9.7. Same errors above, just 0.1 each instead.
The D-score is not great because it’s missing a full pirouette. Add in a toe-full and you get:

I really wish USA would go to Universiade.
Although it isn’t really a team competition as much as it used to when USA always contended for (and won medals).
With 3-2-2 I am sure USA could concoct several combinations.
Wong, Lee, Carey would slaughter in a 3-2-2 scenario. I wonder who they would take off each event?

Has it ever been established why the US don’t send a team?

This was given a 10.0 but, to me, it’s 9.85 — two hand adjustments (she really has a bad habit of doing this on every cast) and a leg separation on the Van Leeuwen. But still a great exercise.

I only took for the first hand adjustment, but I took for leg sep on the first Shap.

I’m pretty sure if she went back to elite they would put the whole kitchen sink back in. But you make a good point re: whether it is even worth it when you can score a mid 9 with a routine like this.

Of course, whether the FIG would give a mid 9, even when it is warranted, is a whole different story. We have seen time and time again where we have scored a routine in the 8.8-9.0 range the judges seem to get stuck at an 8.5 E Score ceiling.

Of course, whether the FIG would give a mid 9, even when it is warranted, is a whole different story.

I’d love to see this tested at a World Cup meet. A handspring second vault perhaps? Someone did that at 2020 Chinese nationals (I think only four had two vaults).

A more plausible scenario would be someone feeling ill on qualification day and going for a beautiful simple bar routine to get through and hope they feel better for finals. I reckon Doug1233 could put that kind of bar routine together for Becky. 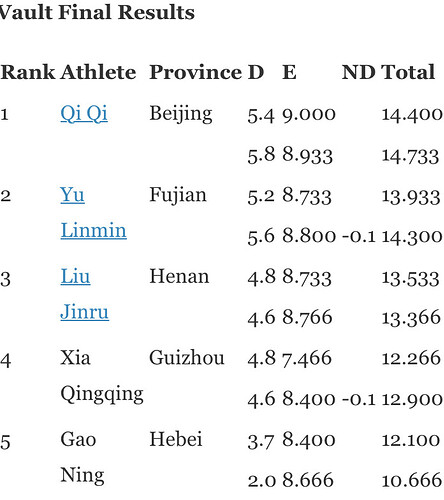 Well my memory was almost correct, five had two vaults. Looks like 8.666 for the handspring, I think it was over-rotated and not very dynamic.

How high do the amplitude, height and distance deductions go?

It’s like these dumbass judges don’t understand that the D-score ALREADY PENALIZES the gymnast for doing an easy vault. I could get it down to 9.2ish with height and dynamics deductions – she doesn’t block into the table well, to be sure, and I have seen a hundred handspring vaults better than this from juniors – but 8.666???

This stuff really, really pisses me off.

Has it ever been established why the US don’t send a team?

The USA sent teams for years and years and it ended once Marta took over.
IIRC, 1999 is the last year USA went.

Previously, NCAA athletes were invited to the Universiade trials based on their AA placement at NCAA Nationals.
So athletes either opted to attend or did not.

Another potential reason is the move to open ended code in 2006, while NCAA maintained level 10 rules.
Previously, these athletes used NCAA routines, while some started from a 10.0 if others did not they competed as is or upgraded to meet the rules for elite COP.

1999 they were 5th IIRC that was when RUS (Khorkina, Dolgopolova, Produnova), UKR (Karpenko, Tyryk, Teslenko, Shkarupa), CHN (Li Xuan, Bi Wenjing, sent several A teams to Universiade- Produnova did her double front vault for the first time).
USA just couldn’t compete with current FIG rules with their current NCAA routines as they had in the past. Moneymaker’s bars score was an 8.775 and the same routine went 9.800 at NCAA championships for example. Their vaults were also quite weak in comparison (NCAA only allowed yurchenko entry in NCAA starting in 1998) With RUS, UKR, CHN doing 9.8 -10.0 SVs.

I think not being able to be competitive due to FIG shifts with scoring is what ended up being the downfall and why US WAG have not gone back since 99. The men have, but the men are used to scoring system with NCAA using FIG COP.

I do think that now that NCAA has shifted and we see more elite Olympic and World team member join and with the emphasis on execution in FIG that we could potentially see NCAA athletes attend Universiade.

I hope that the High Performance Team amends their qualification procedures in the future, which could be written several ways.

There is so much untapped potential.

All 2021 Olympians and world team members, including alternates, are qualified directly to 2022 nationals.

Awesome to see changes that support their continuation.

Here is 1999 University Games, you can see how the USA team compared to Russia (who won gold).
Bhardwaj was also part of the team but I believe she was a specialist.

All 2021 Olympians and world team members, including alternates, are qualified directly to 2022 nationals.

I hope they continue this in 2023 and 2024. This year was unique as both Olympics and Worlds were held in 2021 and all the Olympians and alternates are in NCAA minus Biles. Worlds, only Wong went to NCAA. DiCello, McClain, Frazier are still elite.
DiCello I am glad is directly qualified to Nationals as she is coming off surgery.

What happened to DiCello? (Guess that explains why she skipped Winter Cup)

Chiles confirms she will compete elite this summer and try for worlds: https://olympics.com/en/news/jordan-chiles-paris-2024-elite-gymnastics-worlds-2022

What happened to DiCello? (Guess that explains why she skipped Winter Cup)

She was injured and had surgery. I am unaware of what surgery. She does not plan to be back to competition until Nationals. She will try to do an event or two at US Classic nut is not sure.

This was given a 10.0 but, to me, it’s 9.85 — two hand adjustments (she really has a bad habit of doing this on every cast) and a leg separation on the Van Leeuwen. But still a great exercise.

I agree that Suni’s hand adjustment is a “bad habit” in that it’s a deduction she could maybe avoid. But it’s most likely the right choice for her–a wider stance gives her handstand more stability, mitigating the risk of getting nailed on a no-bonus skill. Then, shifting back to narrower grip gives her more down-swinging momentum for her transitions and giants. It’s a great example of FIG creating deductions based on a preconceived ideal of how things ought to be that ignores the mechanics a gymnast needs to execute 2022-level difficulty.

I’m not defending uncontrolled hand adjustments that arise from balance problems or crooked release moves that mess up your placement on the bar, but instances like that are pretty obvious to a judge’s eye and could be distinguished.
I guess I’m saying that Suni’s technique doesn’t actually negate the perfection of her routine to me, even though judges are right to go by the code and deduct. But it’s a shame the code has eliminated perfection as a matter of procedure rather than enforcing some timeless standards of gymnastic technique (which is obviously not the case or we wouldn’t require E-panel changes every single damn quad).

Your comment is TOTALLY relevant, and I agree that the code should not penalized position changes that are necessary to do an element. I would apply that thinking to the second cast, since she’s catching an element prior to that.

In the first case, though, I don’t think that argument holds. I feel pretty confident that she could probably kip and cast to a solid handstand with narrower arms.

I only took for the first hand adjustment

I think this might be why I didn’t take the second one.