It’s got the form of Nabieva’s vault preflight, but surely this would have to be an I skill?

these are great upgrades. Yeah the form on the Wevers (see what I did there) is a little rank, but that’s an insane combo. I’m a little concerned tho because we saw her train Clear hip-LO tkachev into pak so I hope to god they’re not trying to put both in a routine.

I also luuuurve the bb upgrade. yay Sanne! she sure does know how to show up for the Olympics.

Elze Geurts won the first quali, I really hope they take het for VT and FX

This skill has gotta be an H or I in this code !?

I figured it would be Sanne, Lieke, Eythora, and Naomi
Do you think Elze has a chance?

I am HERE for it! LOVE LOVE LOVE!

And she seems to do a TRUE half twist before her hands grab the bars?

I think she does have the best tumbling hands down, but I don’t kew how are they strategizing

I really hope so! She won qualis today and has more instore, I think for qualis 2, especially on vault… i see her aks a match for Sanne

Yeah she has a really good dty and is planning on doing a front 1,5 as well. She would really complement Sanne.

Sanne is insaaaaane! Too bad it didn’t come together today, but when it does, wow. I LOVE that she does this at 29 and is fit as ever. Hope she will continue after Tokyo. But it also depends on the coaching situation I’m afraid.

For me, the team will be Sanne, Lieke, Elze and Eythora/Naomi.
Naomi doesn’t convince me yet… But she does have the potential to score well.

Wow I did not hate the aerial backhandspring as a flight series, I do love an aerial to lay out

I wish they’d do some sort of study to compare the difficulty of reverse hechts when performed from a swing vs. a toe-on / stalder / free-hip once and for all. Either all close-bar circles increase difficulty by .10 (like for pirouettes), or they don’t. But the mix-and-match approach is BS.

I hate that Eythora couldn’t upgrade after Rio like we thought, and/or that Lieke or Sanne couldn’t find a useable VT for TFs. An Amanar (Eythora), Tsuk 1.5 (Sanne), and FTT (Lieke), for example, would at least keep them in the conversation for team contention. But, struggling to get 2 DTYs on a team makes them consistently in the 7th - 12th tier.

Two dty and a y1,5 wouldn’t be too bad. Eythora had her dty back last competition, but now that she has an ankle injury I’m not sure if she still has it. With both Sanne and Lieke on the team, you need Lieke to vault and while I do think she was training it, I don’t think she’ll do a 1,5.

I know its not the issue here. But Gosh, lieke wevers new fx routine

That moment of the choreography when she approaches the ground is to die for. I just wish she could add a couple of tenths to her D score and make it to the finals. This routine deserves to be watched lots of times (still her 2015 routine remains the best). 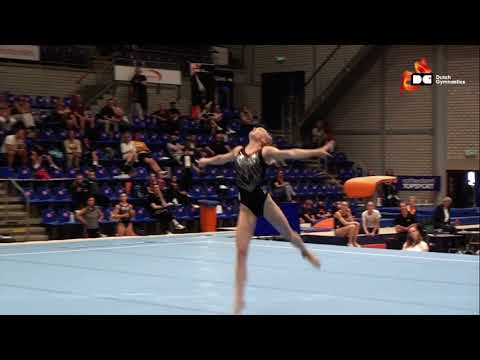 I’m still so unconvinced of the difficulty of these Nabieva variations, especially when they do not maintain arch throughout as Tatiana did. It’s just a Maloney with more counter-rotation

I know, I didn’t say she did a 1,5. I think she was training it, but as I said, I don’t believe she’ll do it and that’s way NL (with both Sanne and Lieke on the team) will always have a fty

Other than the section you mentioned, I was not feeling it at all, tumbling or choreography. I could watch that section over and over and over again obsessively, though. Yeah, I sure could; sublime.

I love Lieke’s new FX even more than the 2015 set (I just couldn’t with that music).

How injured is Thorsdottir? She didn’t even compete today?

Shame about that last pass, but that routine was BEAUTIFULLY choreographed! Exquisite!