I’m not sure if this has been posted yet but I came across this article on youtube of all places lol. VRod lists Listunova, Urazova, and Melnikova as locks for the 4-person team for Tokyo. The 4th spot and the +1s are still open.

Not super surprising, Russia can’t afford to leave any of these 3 at home, so I think it’s good they name them now, so they can pace themselves for Tokyo rather than compete for their spot till the last minute like the US girls have to do. Of course, it’s Russia, so I’m sure at least two of them will go down with an ingrown hair or dengue fever in the next few months.

I’ve been out of the loop with elite - is Paseka still alive? I would rather they not take Akhaimova but do they even have another VT/FX specialist worth sending?

Someone else said Paseka isn’t training, although she posted a recent video doing a Maloney(?) on bars. She was last training in December, I think…

Akhaimova would be their best VT/FX specialist, but I think Russia should send both Ilyankova and Minaeva and stock up on bars, if Minaeva has upgraded her routine. In training she has shown a Nabieva 1/2 + Ezhova, Nabieva + Pak, Downie, Bhardwaj, Shap + hip 1/1… so she could have a monster routine to challenge for the title, if the upgrades come to fruition.

Well, I wouldn’t be upset if Akhaimova/Paseka were nowhere near the Tokyo team. IMO they’re two of the least watchable Russian WAGs in the last 10-15 years, though I enjoyed Paseka pre-2012.

Just watched Minaeva’s routine from Russian Champs. I love the composition. No orphan pirouette! I agree they should go for broke with UB specialists since that’s the only event they have a realistic shot at gold with Simone in attendance. ETA: Minaeva’s got some nice work on BB/FX too! I hope they give her a +1 spot.

Still holding out hope Mustafina will make a surprise UB comeback for her 3rd UB gold, retirement be damned.

The last team spot might be given to yana vorona or Gerasimova. The team needs a higher scoring routine on beam. they should define based on consistency.

This is exactly what I’m thinking too! And if Vorona proves to be more valuable of an all-arounder to the team, then Gerasimova is a good +1 because she really could contend on BB if she were to hit–which she usually does! Until Euros of course lol

EDIT: also, it’s about time I’ve voiced this thought: Listunova really reminds me of Mostepanova. It’s a combination of their faces, their similar build–short with long torso and good (Mostepanova GREAT) extension to make them seem a lot taller–and maybe their general disposition and youthful charm? Energetically, they remind me of each other, and they’re both deceptively powerful. Has anyone else thought of this comparison? Making Urazova the slow and steady, stoic Yurchenko? Lol

Whatever did the Russians do to Ksenia Klimenko - we saw her at the 2018 Junior Europeans - she was third AA and won UB - she looked great? I haven’t heard of her since…

She’s still competing. Last year she made the main National team, but she didn’t this year. I wasn’t ever anticipating her to be a major player, as her key event was weaker than that of the leading Russians on the event.

The vague memory I have of Klimenko is, for me, the same as that of Natalia Kapitonova. I know they existed and their best event was UB.

Mustafina is in no physical shape to compete in Tokyo.

I thought she had already retired? Isn’t she coaching the juniors?

true, but somehow I expect she would still be better than whoever is the current 4th best Russian…Gerisimova? Cuz all she’d have to do is go up there and pose and we’d be happier to see her than shaky, crummy gymnastics.

I’m aware, but personally I’d send her anyways just for shits and giggles. Whoever gets the +1 will probably bomb prelims or get 2-per’d anyways.

Yes and the images of her at Junior Nationals clearly show that she is not in competition shape at all. No way would she have a surprise comeback in two months.

I’ve been holding out hope that Aliya will return when Alisa is a little older.

Same. She could just stand there on the podium, being all unconditioned and boss going ‘jealous, fuckers?’

Also they could send Nabz as the other individual.

I don’t hate this idea. She could make vault finals since Paseka is not currently going for Tokyo.

She can finally get the mid-routine wedgie pick properly named after her. We need a Nabz II in the code.

I know people were excited about Russia’s new seniors but they both are underwhelming to me. This is looking like it could be another 2008 type situation where they leave empty handed. As it stands those on the Euros team might have a challenge even making the bars final in Tokyo. If Melnikova hits she could medal in the AA but it seems like the consistency she had in 2019 has abandoned her. Overall the Russians are going to need mistakes from others to get on the medal stand.

Oh Alinxz23, ever the pessimist. Russia is contending for silver in the TF for sure. They will contend in the AA and on BB and FX, if they hit. Maybe bars but it’s not looking too likely.

Nabieva actually looks fantastic in training on bars, and is apparently training a Cheng. What a shame she only has one UB medal to her name. I’m struggling to find the training vid I saw of her. 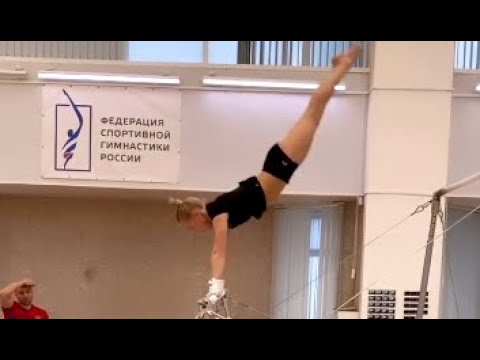