I wonder if it also the fact that she seems to be his current main significant other, but also that he’s denied as much

I was not expecting to see Kabaeva front page on the Guardian, let alone a photo from her gymnastics career 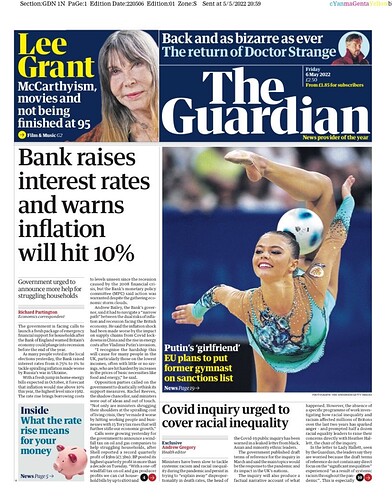 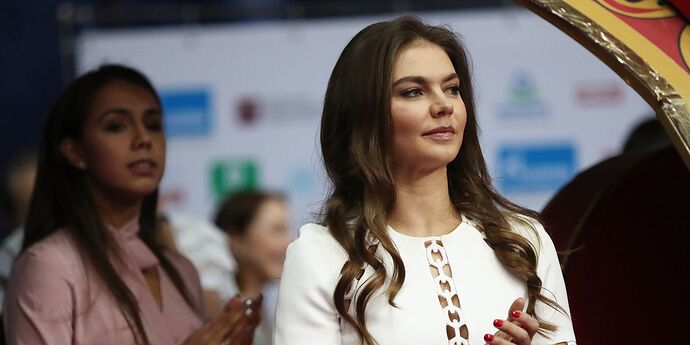 The U.K. sanctioned Alina Kabaeva, a retired Olympic rhythmic gymnast that several Western governments believe to be Vladimir Putin’s girlfriend, as part of a crackdown of people close to the Russian president.

LONDON—The U.K. sanctioned Alina Kabaeva, a retired Olympic rhythmic gymnast that several Western governments believe to be Vladimir Putin’s girlfriend, as part of a crackdown on people close to the Russian president.

The U.K. Foreign Office said that it had also sanctioned Ms. Kabaeva’s grandmother and Mr. Putin’s ex-wife, Lyudmila Ocheretnaya, along with several of his cousins.

The British government said Ms. Kabaeva was alleged to have “a close personal relationship” with Mr. Putin and was rumored to be his partner.

The move puts London ahead of the Biden administration, which has held off on sanctioning Ms. Kabaeva out of concern that it could further escalate hostilities between Russia and the U.S., The Wall Street Journal previously reported. The U.S. government believes Ms. Kabaeva to be the mother of at least three of his children, The Journal has reported.

The U.K. government said that official Russian records show that Mr. Putin holds few valuable assets. These include a small flat in St. Petersburg, two Soviet-era cars from the 1950s and a small garage. It says much of his wealth is spread among a web of close friends and business associates.

“In reality, Putin relies on his network of family, childhood friends, and selected elite who have benefited from his rule and in turn support his lifestyle,” the U.K. government said. “Their reward is influence over the affairs of the Russian state that goes far beyond their formal positions.”

Others targeted Friday include Anna Zatseplina, grandmother of Ms. Kabaeva. The British government said she had received a luxury flat in Moscow from another sanctioned ally of Mr. Putin. Mr. Putin’s ex-wife, Ms. Ocheretnaya was targeted, the U.K. said, for benefiting from preferential business relationships with state-owned entities.

The government also sanctioned Igor and Roman Putin, two of the Russian leader’s cousins, and his close friend, Alexander Plekhov, who the U.K. alleged benefited from state patronage.

The Russian leader has two daughters from his marriage to Lyudmila, which ended in 2014. The U.K., U.S. and the European Union have all sanctioned those two daughters.

The U.K. government said that the latest round of sanctions would “compound pressure on Putin” amid the war in Ukraine. 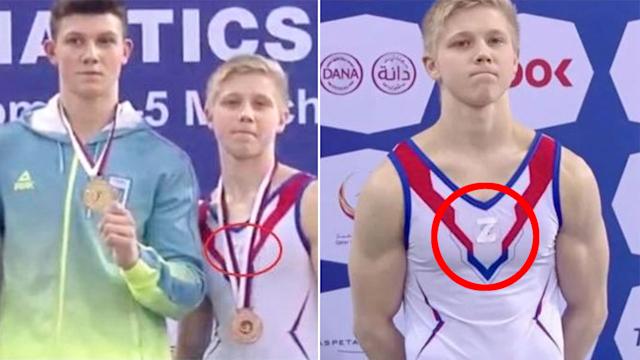 From FIG by email: Mr Ivan Kuliak, a Russian artistic gymnast, has been sanctioned by the Disciplinary Commission of the Gymnastics Ethics Foundation (GEF) for violating FIG rules when he wore the …

1 year ban…so basically nothing since Russia is currently banned.
Should have been banned through to Paris IMO.

But at this rate, Russia might not be in Paris.

https://www.gymnastics.sport/site/news/displaynews.php?urlNews=3505962 has some more details. If Russia’s ban lasts more than his one year, he will be banned an additional six months from whenever it ends. He’s also been disqualified from the Doha FIG Apparatus World Cup and has to return his medal and was fined 500 CHF (about $504 dollars), plus 2,000 CHF ($2019) for the proceedings.

So not quite a nonpunishment, but not exactly severe.

I have a suspicion the federation will pay the fines for him and have a replacement medal made.

I don’t really care about them paying the fine for him, but making him a replacement medal? That’s bullshit.

It’s my speculation, but seeing as they made the Averinas fake gold and bronze medals after the Olympics, I’d say it’s within reasonable bounds.

Russia hasn’t been returning medals. That’s why the figure skating team medals won’t be given out until Valieva’s case is settled. So no chance of the FIG getting that medal back.

Allowing any Russian participation in Paris 2024 would be inappropriate. The rest of the world deserves an Olympics without Russia sucking the happiness out of it. But I bet Thomas Bach will push for Russia to compete. Kuliak’s lenient punishment is a bad sign.

I find the nursery school vibes of it all quite entertaining. 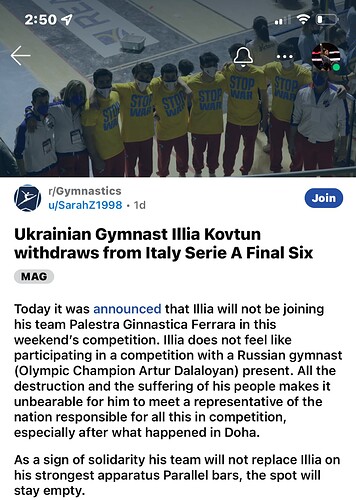 I’d assume Dalaloyan can behave himself but Kovtun has good reason to assume otherwise. He doesn’t trust Russians (or at minimum Russian athletes) due to the ongoing invasion and Kuliak’s fuckery. It’s unfortunate he’s missing out on the Serie A final. But I won’t judge his decision since I’m not on the receiving end of all that.

And how is a Russian gymnast representing an Italian club? Aren’t Russian gymnasts supposed to be banned? Unless he has revoked his Russian citizenship?

It’s not an FIG competition.

Shame on the Italian federation for hosting banned Russian athletes.

And, well… we saw how that turned out.

Shame on the Italian federation for hosting banned Russian athletes.

This is a competition where No countries are represented, only clubs.

I could understand it if there was a club from Russia competing, but there isn’t.

The Italian league not banning Russian nationals has meant that Dalaloyan has spent 2 months in Italy, interacting with Italians, consuming non Russia media. The alternative? He’d have been a VIP guest at the victory day parade like the rest of his team mates.

It’s completely understandable. But completely. It doesn’t matter that Dalalyan isn’t technically representing Russia. He’s Russian. And it’s Russian soldiers, young Russian men like him, who have laid waste to Ukraine. How can you blame Kovtun for not wanting to even look at him, much less compete with him. I think it’s one thing for athletes to shun athletes from countries with which their own country lacks diplomatic ties or is in some sort of Cold War with. That’s not ok. But to not want to compete against a citizen of a country that invaded yours and has basically destroyed the lives of your own countrymen has to be understood and respected. And that’s an understatement actually.

I mean, Dalaloyan’s hometown is also occupied by Russian troops and he criticised Kuliak’s actions on national television…

It’s also pretty disrespectful of Kovtun towards his hosts. He knew Dalaloyan was also in the league, yet he accepted somewhere to train and somewhere to stay only to not compete for his Italian club.