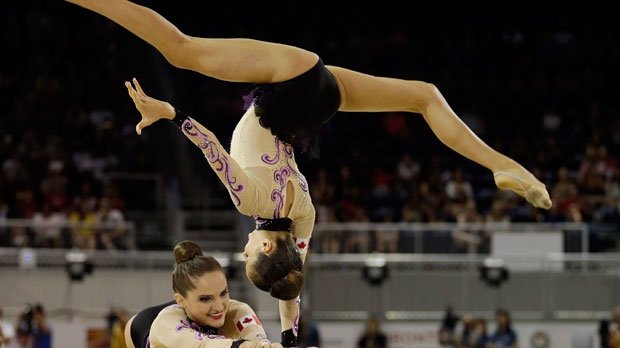 Gymnastics Canada will not send teams to Olympic qualifier over COVID-19...

Gymnastics Canada will not send a team to a last-chance Tokyo Olympic qualifier because of COVID-19 concerns.

So now who will take second spot behind Andrade? Argentina? Jessica Lopez? Mexico?

As long as they get a higher AA score than Amelie Morgan, I don’t mind! Ha

Any girl from Cuba?
Yesenia Ferrera is a superpowerful girl but too inconsistent though. Last time i saw her was in 2019

It’s really hard to keep up with who has qualified and who hasn’t!

Looking at worlds 2019 results, looks like Abigail Magistrati got 2 per countried out of an individual spot for Argentina, as did Thais Fidelis for Brazil and a couple of Mexican athletes.

They don’t wanna go because of Covid.

Is Canada behind in vaccinations? Surely they could get the team and coaches vaccinated in time, I would think?

Canada isn’t where the US is as far as vaccinations. That, plus the fact the Pan Ams are in covid hotspot Brazil and the Canada has been extremely vigilant about limiting travel across the border an mandatory quarantines for anyone who does come into Canada, it just makes sense to them to not even bother.

The strongest 4 person team they could send (Black, Moors, Padurariu, Olsen) would have all their EF contenders. They’re not really in dire need of a +1 the way GBR is w/the Downies.

And it will be a feat just to get Black, Moors, Padurariu, and Olsen all on the same team. I was told CAN’s having to triage a lot of injuries, namely Moors and Padurariu, and they’re honestly not sure they’ll be ready in time. It’ll be heartbreaking if neither can go to Tokyo.

The drop off in quality and skill level from the top 3 AAers is pretty substantial though. Especially since Black is ineligible for the +1, it’s not unthinkable that CAN could attend and still not earn it.

I had high hopes for Rose Woo back in 16’ to be a top AA, but she’s been underwhelming all quad.

It’ll be heartbreaking if neither can go to Tokyo.

100%. They’re the most enjoyable gymnasts Canada has produced since VMoors/PPL. For both to miss Tokyo, they would probably be in jeopardy of narrowly missing TFs like in Rio.

Are Black, Moors Olsen and Padurariu all not ineligible to secure the extra OG quota due their participation in Stuttgart 2019.

Based on the most recent results of the results from their technical trials the only ones on the horizon who would have an opportunity are Ava Stewart and Rose Woo - neither of whom were in Stuttgart. They both were ranking behind Black in their series of events - but is it really in their best interest to go to Brazil if they have to go back to Canada and quarantine for the 14 days? Not a good situation even for an alternate.

I didn’t know about this … not to be overdramatic but it would be a little bit devastating to lose either one of them, never mind both.

I was hoping Brittney Rogers and Peng Peng were training in secret and can fill in should any of the core four go down with injury.

Ava Stewart is a first year senior from Canada and scored a 55.000 in the AA at the 2nd Technical Trials.
She was 2nd at Elite Canada, 1st Trial, and 2nd Trial.

She definitely was in contention for a +1 at Pan Ams.

I also think she could very well knock out either Padurariu or Olsen from the Olympics.
She’s slowly upgraded her FTY to a 11/2TY and has a DTY that she lans to debut at the next two technical trials.
She has scored 13.5-14.0 on BB and has a 6.0 D score on UB and went 14.650 on UB at the last trial. That is a huge number. She is weak on floor with a 4.9 D score and hasn’t gotten into the 13s, however wouldn’t do this in TF should Canada make it.

Olsen would only be used for VT and FX in TF and scores on those events are pretty moot if Stewart is vaulting a DTY, although Olsen’s FX score would be missed.

Stewart is 15 and will be 16 this year and is suddenly eligible for the Olympics like Listunova.
I think if she makes the Olympics and gets experience she can be a real threat at Worlds.

Ava Stewart is a first year senior from Canada and scored a 55.000 in the AA at the 2nd Technical Trials.
She was 2nd at Elite Canada, 1st Trial, and 2nd Trial.

So her first senior international competition could be the Olympics? Hope she has a steady stomach!

I hadn’t seen/heard of Stewart before. She kinda reminds me of Kristina Vaculik with a little more power/finesse. Anyone who can keep Olsen off the OG team has my vote of confidence. My eyes can’t handle her and Black on the same team anymore.