I wasn’t quite sure where to put this because I didn’t want to disrupt the UKR/RUS/Gymnastics thread.

Last night I went to see the film Olga. Many UK cinemas ran preview screenings at the weekend as a fundraiser for UKR charities. Filming began in 2019 but was interrupted by the pandemic and completed in the summer of 2020. The film did well on the the 2021 film festival circuit and it’s even more poignant given current events.

Olga tells the story of a 15 year old UKR WAG who is sent to train in Switzerland when her Mum’s job as a reporter puts them both in danger. While in Switzerland the 2014 Euromaiden revolt breaks out and Olga has to deal with intense worry about her family, friends and country.

I don’t normally see film festival-type films so its difficult for me to compare its strengths as a film. I can say that it is well done with good acting and the story is very hard-hitting with extra resonance from a 2022 perspective. There were some odd loose ends in the plot and I couldn’t tell if those were pacing decisions or done to keep the focus on Olga (or both).

It would be an important and fascinating story whatever the main character was doing, but of course the gymnastics focus means it’s extra relevant to us. We now have another entry in the pantheon of gymnastics films! There was a lot more gymnastics here than I expected and it’s done pretty well. The main character is played by a gymnast (Anastasiia Budiashinkina, 2017 senior but I wasn’t familiar with her) so the frustrating stunt/actor discontinuities we are used to are not an issue. A lot of the gymnastics is filmed quite zoomed in actually, bars is the main focus throughout. I think they filmed this at the SUI national training centre. Refreshingly it looks like a working gym (not shiny like Stick It) with gymnasts in work out wear rather than competition leos and coaches actually giving some technical advice. Fans of the training in secret at night gymnastics trope will not be disappointed here! Once the political side of the story escalates it was difficult not to think of Kovtun, Batrona and the others competing right now.

The characters always mention “the Euro” as the big competition they are training for. I don’t know if this is a language thing, a mistake or that they weren’t allowed to say Europeans, Euros, European Championships etc for some reason. While the training scenes were quite good, the competition was the usual mess of non-podium, weird format, ridiculously easy skills being fawned over that we love to nitpick in gym films. The competition is as vague as it can be about what it is, some aspects make it look like a team competiton and other like it’s an AA competition. There was a gymnastics protest that would make Jessica very happy and I think they included some footage of MJDS on the big screen at one point. My favourite in-joke was a statement about a gymnast competing for AZE now! Three characters who used to work together end up on different teams and the film dealt well with some of the implications of nationality switches in sport.

There will be things that make gym nerds roll their eyes, but this is a very good gymnastics film, a good film, and an important film right now. 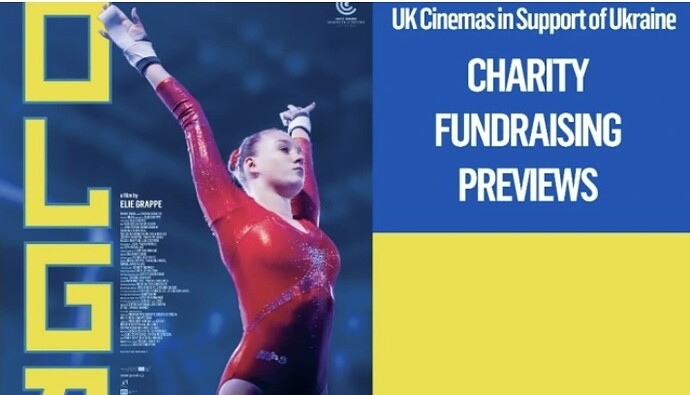 Good to know that Anastasiia is safe in Poland.

It sounds really good. Unfortunately it’s rather unlikely to be shown here, so I’ll have to wait for it to be on streaming.

Did you watch Perfect 10? It’s set in the South of England. Similar in a way, gritty, low budget film

No I’ve not seen or heard of that one. It’s available to rent/buy on Amazon though so it’s on my to watch list. Thanks for the recommend.

I don’t see a US distributor for the film so I can’t see it yet. But this looks interesting.

It may be on Netflix. I would love to see this. Wish it was being distributed in the U.S.

I hadn’t heard of this, must take a look.

Now that it has aired in the UK I hope to see it here soon. Any chance it will show up on one of the British channels we get in the USA? I tried to VPN into it recently but I couldn’t make it work to download the channel 4 app.

No. Channel 4 have the rights to it. So it won’t be shown on any other British channel

I’ve seen it, and it’s wonderful. The stuff about Ukraine rebuilding after the Maidan Uprising is really hard to watch in the context of the current political climate, though.

Decent movie. It’s underdeveloped, both in the political angle and the main character’s journey as a gymnast (and as a person in general), but worth seeing. This is like the groundwork for what serious gymnastics-related movies should strive to be.