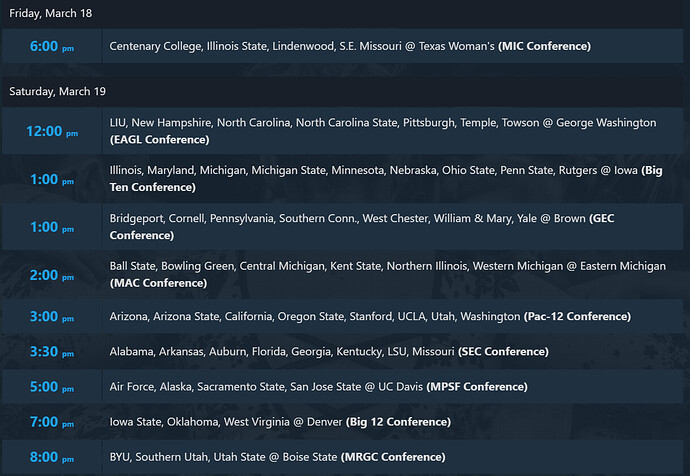 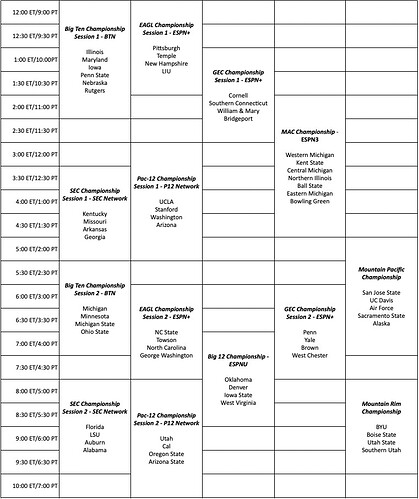 Already an upset at the championships front.
Texas Woman’s put up a program record team score to take the MIC, followed by Lindenwood (who won the last 6 conference championships) and Illinois State who were the favorites to win.
Illinois State did count a fall on beam but even had it not counted TWU really hit it out of the park.

Total beam disaster for Penn State. I think that just ruined their slim hopes of sneaking into the top 36.

I think that just ruined their slim hopes of sneaking into the top 36.

Yup they are eliminated as they would need 49.7 on floor and vault to get the score needed to move ahead of Western Michigan…and WMU still has MAC to improve NQS as well.

Only Kent State and Central Michigan can disrupt the top 36 now, but they would need to do well AND Western Michigan needs to not have a good day as they are currently counting 195.750 and want to replace it. 196.525 would outright clinch a spot.
San Jose State is 35 so they are also at risk.

West Virginia is now “safe” as is North Carolina though technically not mathematically safe yet.

What a shock that SECs has had the least insane judging so far. Pac-12 scoring on the other hand felt like a UCLA homemeet. How, as a judge, do you justify giving Flatley and Chiles both 9.85 on UB, when the latter fell out of a handstand and was short on the orphan piro? Everything else was great, but that’s a glaring error. Either the judges don’t care or they’re incompetent…idk which is worse.

I missed Big 10 night session, unfortunately, and because Pac12 and SEC are at the same time, I’ve missed SEC entirely.

Evening session of Pac12 is just as score crazy.

Grace McLaughlin not jumping up and down all crazy deeply amuses me.

What? Did she get injured? Or just miss?

Injured. Her knee appeared to give out when she landed her beam dismount.

(I guess the site doesn’t let you vaguely swear in response to bad news. So: that sucks!!!)

Rumored Achilles, which would line up with her and the staff’s reactions + all the calf and ankle palpating.

SEC scoring went way up in the PM session and the judges stopped caring. They just wanted anybody to hit and stick a few landings. Lmao @ 49.675 UB for Alabama, and 49.700 for what was not Florida’s best or even near-best beam effort.

Never thought LSU would take themselves out in the first rotation, even though they’re managing several injuries. I imagine they’ll rally back for Regionals and semifinals, since that’s their shtick, but there have to be some postseason jitters in the back of their minds after a weird night from an Achilles-limited Kiya Johnson, and that scary vault miss from Haleigh Bryant.

That was a very strange end of SECs. Luisa gets hurt (ugh), Bryant tucks and collapses her vault, Florida seals off a 198.2 with their meet low score from their floor anchor, and… Suni gets a 10.

Florida is definitely the best team in the country with Michigan right there. If they are hitting it should be Florida on top but barely.
Utah and Oklahoma are the next two.
Alabama would definitely be in the hunt but Blanco’s injury is going to hurt them significantly.

Auburn, Kentucky, Missouri, Cal, Michigan State, LSU, Minnesota are all grouped together in the next tier.

Regionals will be killer. If any of the 1 or 2 seeds count a fall, that 3 seed an even 4 seed could without a doubt go ahead.

Florida @ SECs definitely made me eat my words from earlier in the season. They finally looked like a team that I was hoping they’d be in preseason.

LSU looked off from the jump, and not having KJ Johnson in the lineups didn’t help. I looked away for a second at the start of the meet, and Kiya was off the bars. It was so surprising I thought the livestream had frozen or something.

Michigan/LSU/Missouri/UCLA is going to be a killer regional final. I wouldn’t want to be either of UMich or LSU with Mizzou coming on strong and UCLA lurking. What a boon for the teams at other regional sites that either the reigning national champs or LSU could get eliminated.

LSU looked off from the jump, and not having KJ Johnson in the lineups didn’t help. I looked away for a second at the start of the meet, and Kiya was off the bars. It was so surprising I thought the livestream had frozen or something.

KJ Johnson vaulted…they took her off floor and put up Shchenikova.
Not sure why they did that but Jay has also been part of the movement to have 7-8 warm up and choose which 6 to go depending on how warm ups go. The original plan was for Shchenikova to do only VT/UB.
KJ put up a 9.900 for a Yurchenko Full so was clearly not injured.

So still unsure what prompted that decision, but it was definitely a replacement in the line up NOT due to injury.

Also I love Missouri and secretly hoping they knock of LSU again and make nationals. UCLA I am good with them not going. To be honest the drama between LSU and UCLA with Alexis Jeffrey makes me hope neither team advances.

Considering that LSU lost no routines from last year and brought everyone back plus the freshman, they have not lived up to expectations this year at all. They should have been pushing for the top 2 if not #1 team in the country.
Compared to UCLA who lost 50% of their post season routines from 2021 and had a bunch of new freshman.

Ah okay, I didn’t see her vault, and having not yet looked at the results, assumed she was injured. Interesting they replaced her w/ Shchennikova…her leg/knee has been heavily wrapped this season. I’m surprised they didn’t put Ballard or Arenas in to let her rest too.

LSU’s form has been ragged for a few seasons now, but the fantastic conditioning they would have at the beginning of the season compensated for that. It doesn’t help that a lot of their key players have some sort of injury or potential for injury that the coaching staff needs to manage. If Kiya/Haleigh both make it as individuals, I wouldn’t mind LSU getting knocked out either, especially after last years regionals where I felt UK should have moved on instead. Outside of those two and Finnegan/KJ, I still can’t get into LSU.

They went 197.625 at their only non-SEC meet this season, and I just don’t see them breaking out of the low 197s with realistic judging, especially against teams that look stronger and cleaner overall. Unlike last year, I don’t think their guaranteed to get to regional final with a performance like last years semis/finals. Of course, this is all dependent on regionals being judged with any level of scrutiny unlike the home meet crack-festival that was the 21’ SLC regional.

Re: KJ Johnson, they said during the broadcast that she was out of floor because she was recovering from illness. That would explain why she was able to vault but didn’t have the endurance to do floor.