The Favorite because he’s the GOAT: Yang Hak-Seon
That’s a front triple twist and the guy even prepares the landing. It’s absolutely astounding. No vault ever done is as good as his “Yang” vault. The form in the air is simply gorgeous, too — not even crossed feet! And his second vault is “easy” for him usually — oh, just a Kas dou

Nikita Nagorniy
Second favorite, after Yang — especially when you put difficulty and execution together, and with Dalaloyan likely not vaulting due to a foot injury. I am not sure if NN plans to upgrade the first vault (to piked) for finals, but even without it, he’s the most reliable bet. 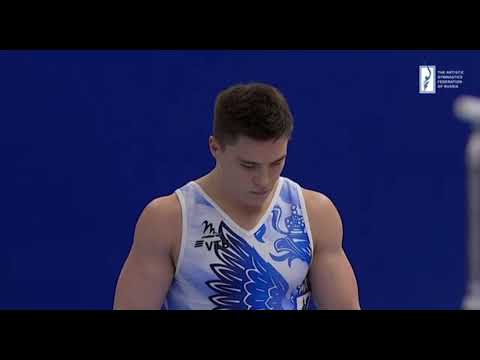 Igor Radivilov
Okay, yeah, he’s doing the piked Dragulescu now, but it’s not good. (The score here is a little generous. He lands with his chest way down and there’s all kinds of form deductions.) But his Tsuk double pike has never been awesome. Maybe a bronze?

Marian Dragulescu
Over 40, and still a contender… from earlier this year. He’s really having trouble with his Li Xiaopeng vault, though. He can’t even get a double full around, let alone a Rudi. He was credited with a Rudi only here.

The boy is going BIG. He probably will have the highest combined D-score of two 6.0 vaults, both named after Ri Se-Gwang. Other guys will do one, but I think he’s the only doing two. He’s been doing these vaults for a couple years, but I don’t think he’s ever made both well in a single competition phase. They’re a bit sloppy, but he’s a contender for gold, no question about it.

@Denn These previews are going to be fantastic! In the months since that last big competitions I’ve lost track of the contenders and their scoring potential. This will make MAG much less of a mystery for me.

@Denn Yes… this is an awesome idea! I can’t wait to see more of these previews.

@Denn , thank you for doing this!

ETA… Yeah, I think men’s vault is the most terrifying event

UPDATED BECAUSE YANG MADE THE TEAM AND SHIN WILL BE AT DOHA THIS WEEKEND:
Korea has another guy that could qualify to the Olympics depending on what happens in Doha, Qatar at the World Cup June 23-26.

The upstart: Shin Jeah-wan
Same two vaults as Yang except that the extra half twist is on the Kasamatsu vault instead. He’s sloppier, though, and doesn’t quite prepare to land. So it all comes down to whether Yang goes to Doha and what Korea decides to do with it all.

I really enjoyed these when you did them in the past.

Shin Jeahwan did not make the Olympic Team for Korea.
His only chance is to qualify for vault which he had very good odds on but not guaranteed. He is on the nominative roster for Doha.

Who is on the team? Nobody ever knows what’s going on in Korea for men’s gymnastics. Sigh.

He was on the roster for Doha back in March but he was not on the updated one a couple weeks ago when I wrote the post. I see that that has changed! https://www.gymnastics.sport/asset.php?id=fidb_10632

Updated the post… I will start other apparatus next week.

Same thing happened in 2008, except 4th place – i can’t find video, but I think he fell on the Li Xiaopeng vault he was doing as a second vault then.

Same thing happened at Worlds last year even! Except his second vault is even worse, though he did get around the twists in prelims almost.

If he can nail his own vault maybe he can just perform a clean 2nd vault…slightly easier, but executed as well as possible, like a DTY.

I really don’t think a DTY will be enough to medal. Maybe a Kas-1.5 though… Honestly, I think he just needs to fix the Li vault I think. If he can do that, he can still medal. That first vault is going to score 9.5ish even if he lands it with a small step or hop. And the Li has an extra D-score boost compared to even “his” vault. If he can score a 9.2 or something on it, he could still medal.

Unless Yang totally misses one vault, he gets gold.