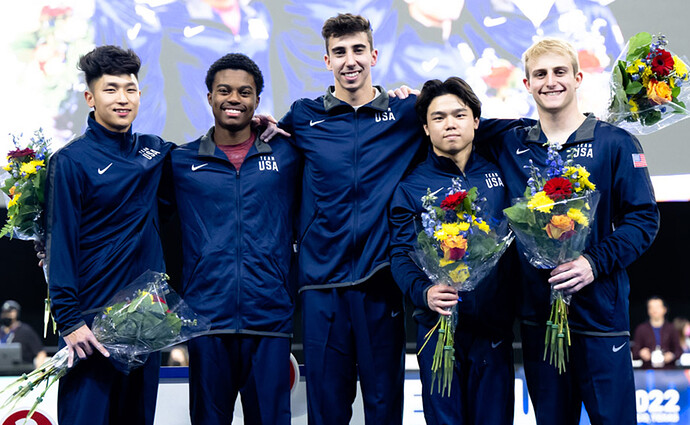 Members of the current U.S. National Team are listed alphabetically below.

Members of the Senior Development Team are also listed alphabetically.

Congratulations to the guys! There’s a lot of talent.

I was under the impression Whittenburg retired, although I saw posts recently that seemed as if he might reconsider.

I believe the last time Penev competed internationally was 2017. I was not surprised to not see him on the list.

Donnell took time off right before this and it seems he hasn’t decided if he’s done yet till he starts training again.

Eddie Penev is training after a lot of rehab.

Some guy from Stanford won PH with a fall??

Some guy from Stanford won PH with a fall??

Bonus points, when you do the difficulty you can pretty much outweigh a fall.
If you got .867 in bonus but fell, you end up only losing .133 because you got the bonus in.

This bonus is silly

It did encourage guys to try more difficult skills, which is the point of it. In the past, they would not try the harder skills, because the risk of falling. It makes it harder for them to focus on the difficulty in that case. It was the first time they tried it, so it will take some time to see how it plays out.

I think it makes sense to encourage the difficulty because the only way to get better at it is in competition circumstances.
I do wish there was a way to rank in two ways. As regular routines (FIG) and also bonus added routines (USAG).
USA men need more difficulty to contend with the top tier, otherwise they will always be 4th-6th.

I do agree it doesn’t make sense because at Worlds a fall is 1.000 and it won’t matter how much difficulty you put in place.

Donnell took time off to rest his body and for mental health.
Penev is rehabbing after his latest surgery.
He’s claiming ageism and homophobia as to why he’s not on the NT. Honestly, as @MAGfan said, he hasn’t repped the US in a meet outside the US since 2017. That’s 5 years of a paycheck for what? Why should the USOPTC keep funding an athlete who can’t compete.
I’m a huge fan of his. However, these claims sound bitter. If he was a healthy 30-year-old, more power to you. Keep going. I feel like he’s been unhealthy way more than healthy. At some point, everyone has to retire from performing and pivot to a new career. Whether it’s coaching, judging, or a whole new career.

This annoys me too. He’s had plenty of years to show results and he hasn’t.