Have at it! This is for all MAG discussion and analysis.

Brody Malone the fave? Maybe Yul or Wiskus can challenge? Anyone else a player, i dont follow the men too much, but ill be watching.

Ok Asher we see you! I remember him from earlier, hes got a shot.

Is Donnell an all arounder?

“The judges are brutal because they’re following the rules.” Thank you, Tim, for finally acknowledging that part.

Start lists have him on every event.

No green, yellow, red graphic! And Tim is actually talking some technical stuff.

I missed a good chunk with a fussy baby, but this seems like some of the best coverage we’ve ever had from NBC. I hope it keeps up tomorrow

I do still wish they would show more gymnasts. I feel like there is still alot of watching them stand around, watch others, tape up, etc. I want to see more gymnastics.

I like Fred. He’s a little rough but still young.

So what are they going to do if these results hold, Hong and Whittenberg go 2-3 2nd day and at world trials. Can they both make the team?

I loved the commentary too, Tim is breaking down every single routine. The only thing I’m confused about is what is John Roethlisberger doing there…? He isn’t speaking at all until it’s between rotations and then still only speaks if he’s specifically asked a question. Like is he just sitting there next to them in the booth not talking? Is he wandering off somewhere during the rotations? What is going on there. I missed the very beginning of the broadcast so maybe this was explained then.

It was nice not to have to sit through Nastia pretending she knows anything that’s going on.

I wish Asher didn’t have those falls.

So what are they going to do if these results hold, Hong and Whittenberg go 2-3 2nd day and at world trials. Can they both make the team?

It seems like he’s on the floor during the competition.

Missed this part of coverage, Can someone explain the bonus in Carrun Phillips PB score? And how does his routine stand up against the rest of the world?

Im looking for info on the bonus system. I posted this earlier.

I agree the commentary has improved.

The D score bonus thing is this - 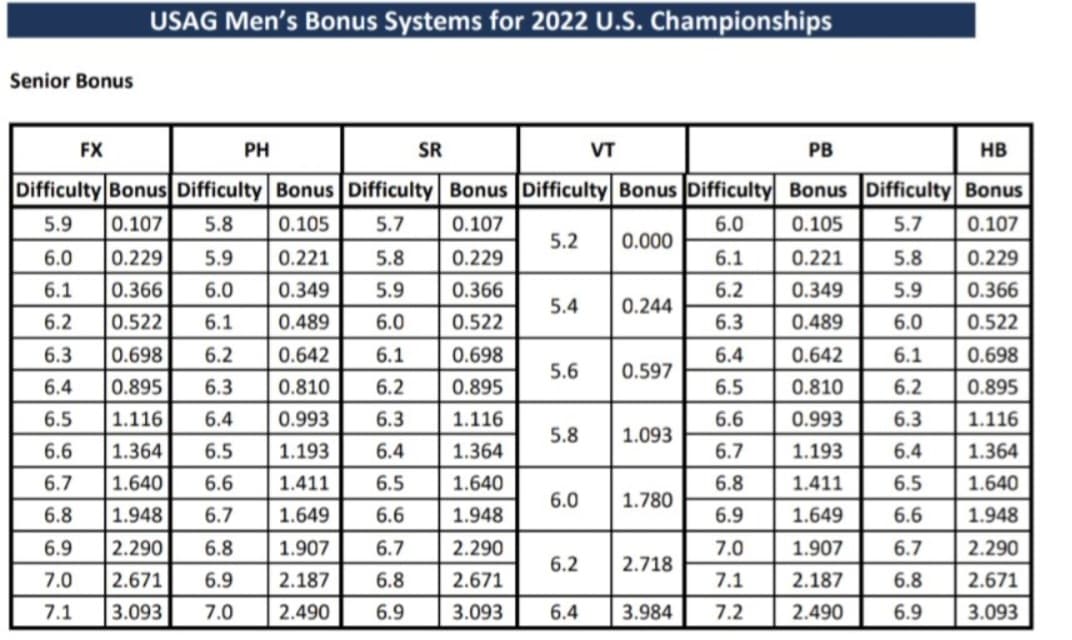 I’m not a fan of it, but at least USAG is making it public (unlike when they have used it in the past).

I don’t think the US men were not doing higher difficulty last quad because the incentive wasn’t there. The incentive was there. We just didn’t have many people that could do it, and some of the ones who were attempting it were not always succeeding.

With the addition of Hong and Richard, among others, that is less of a problem.
We still aren’t super great on HB, but getting more guys with hard vaults (Hong, Richard is supposed to have a Dragulescu).

People have short memories - just a few years ago all the talk was about how the US men had hard stuff but were ugly and inconsistent.

It seems that due to the US bonus system some athletes are getting 1-3 points in bonus. Is there any concern that the bonus system could result in selecting the wrong athletes for an international team?

I guess nationals scoring (which seems to overlook some execution errors) could cause the same issues anyways.

it seems weird to me that we a bonus system(and I know other countries do as well) as those bonuses will not exist in international competitions. TPTB would know what they would have scored sans bonus so they do know the “real” score when making decisions