So this is taken from the other thread: 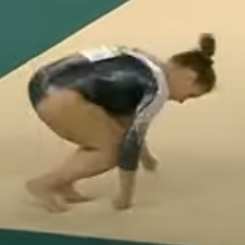 What’s the deduction for punching the floor mat? Ha

She was lucky to make EF.

I feel sorry for E4. She must have felt like shit when the 8.233 was flashed.

ETA: This is why I’m so fucking mad they didn’t release the Tokyo book. Things like this we would have never discovered but for the Rio book being released / leaked. I actually don’t even know if it was ever officially released but someone somehow got a copy of it and posted it online. We need more transparency. What are the FIG trying to hide?

This was the paltry ultimate response I got from the FIG after asking several times for the Tokyo Book (which does NOT have individual E and R panel deductions like the Rio book does):

Celine doesn’t even reply to me anymore…

Does anyone on here have any more senior contacts who we could ask? I can’t believe the gymnastics community doesnt seem to care that much about this. Figure Skating releases full results for the shittiest of competitions yet the FIG can’t even do it once every four years for the fucking Olympics. It’s a disgrace. Why aren’t Jessica and Spencer talking about this instead of 30 minute dialogues about wearing Rainbow Pride facemasks at meets.

Does anyone else care about this as much as I do?

For anyone interested, here is the detail contained in the Rio Judges Book that isn’t in the Tokyo Book released to the public: 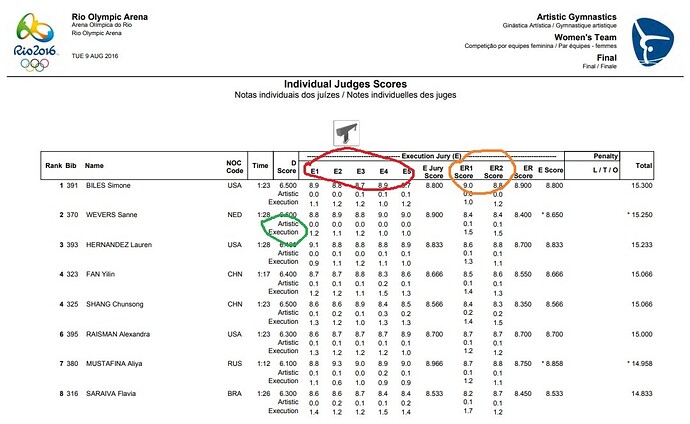 Why can’t we have this for all Olympics and Worlds competitions? I am SURE the FIG have these documents somewhere, they’re just not made public.

For example, just on this page alone, we can see that ER1 gave Aly Raisman and Aliya Mustafina the same E Score. Whereas E2 gave Mustafina 6 tenths more (and literally only 6 tenths in non-artistry deductions…)

My only guess as to why the FIG don’t want these scores to be released is that it reveals issues with the judging that they don’t want the public / journalists to report on. Why else would they cover it up?

This issue is only going to get even more important in the next Quad - with now 7 judges forming part of the E Panel and (absolutely mind-blowingly ignorantly) the middle 3 of those 7 scores counting.

Am I the only person that cares more about this than anything else going on with the FIG right now??

My only guess as to why the FIG don’t want these scores to be released is that it reveals issues with the judging that they don’t want the public / journalists to report on. Why else would they cover it up?

You mean they don’t want people saying “well, that’s a rather curious pattern judge E has when it comes to Chinese gymnasts”?

I care about this and am always in favour of score-crunching based discussions. I’m afraid I don’t have any FIG contacts to suggest though.

I know you have mixed feelings about GymCastic, but it might be worth e-mailing them about this. They do have a history of persistence when it comes to asking questions and getting statements from organisations. Spencer would definitely love to have the data and Jessica would be all about the transparency.

Spencer would definitely love to have the data and Jessica would be all about the transparency.

I’ve tweeted at them several times. I wrote it in the comment box on a Gymcastic livestream. I posted it in comments to BBS blog posts.

Even @Pamchenkova on Twitter, who has quite a gymternet following, made several tweets about it, and Jessica and Spencer were tagged several times in many different comments only a few weeks ago and they never picked up on it.

Other than borderline harassment i’m not sure what more I can do to reach them.

They don’t really seem to care. Which surprises me, because I would have thought at least Spencer would be curious about it.

I’ve emailed Gymcastic before. They never acknowledge or reply. Probably a waste of time.

That’s a real shame. I know Spencer doesn’t read BBS comments but the other methods should have got through. They are focusing so much on NCAA lately that perhaps they just don’t care about elite right now. I know there are no FIG competitions at the moment but a whole bunch of gymnasts have just turned senior and that would be a fairly obvious start of the quad (tri? trin?) podcast to me.

Would love for Gymcastic to push harder for this.

Other than borderline harassment i’m not sure what more I can do to reach them.

I say go for it

Yes, I agree. Better than half the stuff they cover.

The reason the FIG does not publicize individual judges’ scores is to prevent/decrease the pressure put on the judges, by their own national federations, when it comes to score their own gymnasts. It is as simple as that.

I have seen, or have it somewhere, the official London book, with individual scores. It is available on the internet.

I have the Rio book. Can you post the London book if you have it (or happen to find it)?

prevent/decrease the pressure put on the judges, by their own national federations, when it comes to score their own gymnasts. It is as simple as that

Thank you. Is there any public reasons why they changed their mind with tokyo?