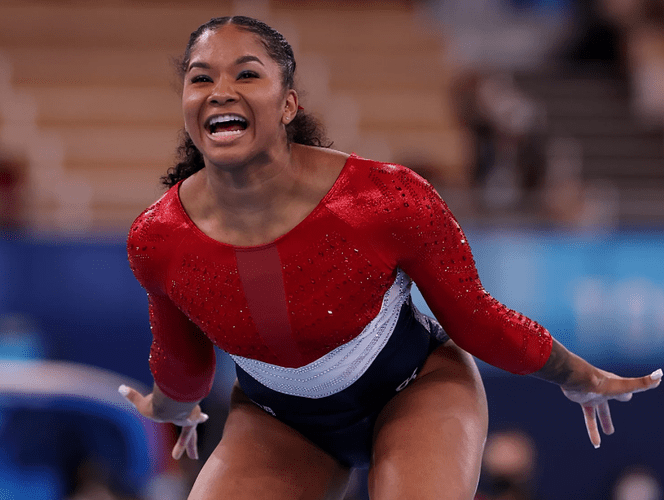 I must admit, I got carried away with the USAG overscoring too. I didn’t think that she would be that overcooked on execution in Tokyo - predominantly because I thought that leotard/AlyRaisman bonus would save her. But it is impossible to ignore that Jordan has been “3”-d to death on her turns, leaps and jumps.

On the whole, I must admit the judging at Tokyo has been stellar; and exactly as the Gymnaverse Panel has been scoring the domestic meets all season. Looking over the Gymnaverse panel from Prelims (and my own scores - so far - from TF), they are strikingly similar. Like, always not deviating more than 2 tenths.

Which is far more than can be said for the difference between Gymnaverse and USAG domestic scores at Classics, Nationals and Trials, where we often deviated by 5-8 tenths for Jade/Skinner-type gymnasts.

I also think - thank God that the Simone mental health stuff is swallowing the headlines. Simone would have needed a 58.4 in the AA for USA to have won the gold in TF - something she failed to do in prelims (by almost a point). The fact that Jordan got an 11 on floor, and completely destroyed the US chances of gold, has pretty much vanished from the discourse. And that’s a good thing - we wouldn’t want Jordan to get butchered a la Sacramone.

What do you guys think? WTF happened?

It was not just Chiles, but the entire US team was judged fairly here in Tokyo and needs to be a wake up call. This also happened at the 2019 Junior Worlds.
Domestic scoring has always been a problem but it seems to have caught up to the US finally.

Russia scaled back some difficulty and focused on execution and it worked for them. Beligum didn’t have the most difficulty but they all (with the exception of one gymnast) went above 8 for execution, so 15 for 16 with the 16th a fall from beam which went 7.1 so quite nearly all 16 routines were 8 or above for execution.

Carey and Skinner also received low 7s (and rightfully so) for beam and they appeared shocked and confused. Skinner scoring a 14.100 at Trials beam day 1 was utterly ridiculous.
It is not fair to the athletes and the fans with this happening. It then appears the US athletes are being discriminated against for “being too good”.

The number of social media comments that are blaming judges for low balling the US team so it’s fair for others is astounding. The number of comments saying that it is not right that Simone “doesn’t get her full points counted” so it’s “easier” for the other gymnasts is insane.

Home scoring needs to be more realistic moving forward. Something in the system needs to change.

The absolute irony is that the USAG scoring for the lesser-name gymnasts (think the ones coming in 20th at Nationals) are absolutely on the money.

The judges know how to score in line with international standards. They just choose not to for the big names.

With her best routines from prelims and AA she is at 55.865, 10th AA. That would have placed her behind Carey, ahead of Skinner and McCallum which is probably about right. Mostly an issue of Jordan not hitting 4 for 4. The biggest judging difference for Jordan seemed to be vault, right?

The biggest judging difference for Jordan seemed to be vault, right?

No way. Beam and floor. That’s where her leaps become an issue.

The fact that piecing together her best routines across two days of competition still can’t beat Jade Carey - says a lot about her strength as an AAer.

Has it always been this bad or has it gotten worse recently? The only example I can remember is Jordyn’s beam connection getting credited domestically. I’m not a judging expert by any means lol.

Russia scaled back some difficulty and focused on execution and it worked for them.

I remember looking at the FX straight front fulls at Russian cup/nationals (?) and thinking they were placeholders for an upgrade. I was completely wrong, but their strategy was right and Jordan’s iffiest pass all year returned to WOGA invitational level.

Has her floor wolf degraded? I feel like she’s much higher now and you could hear her team yelling to stay low in TF. I’m too lazy to check right now but I feel like earlier in the season the position was better but the turns weren’t completely rotated.

If anyone wants a post-Olympics data crunching project I’d be interested to know which country had the most/least accurate domestic scoring for comparable routines.

I feel like the US women shouldn’t be doing front double fulls unless they’re doing them as well as the best college women.

And also, I’m sorry but this is just factually incorrect: 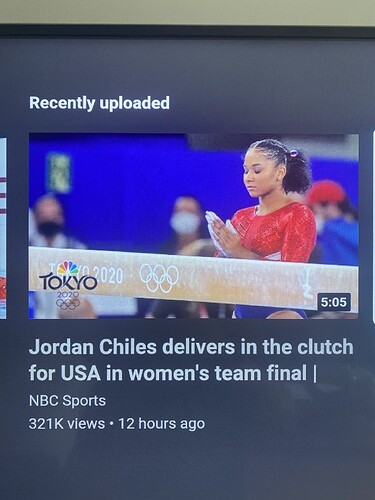 I don’t mean to drag her. At all. But this is just inaccurate reporting.

I guess they’re referring to the fact that she was asked to do bars and beam last minute. But Jordan is an AA gymnast, and she competed those exact events like 2 days prior.

And based on the PT and Prelims line ups, she was ALWAYS slated to do AA in TF. Taking her out was only due to her disastrous prelims performances.

In my fantasy, USA gymnastics keeps a tighter muzzle on NBC. They did absolutely no favors to the general audience. I (loathe 4 year fans. You can only explain things so many times.)

A tighter panel was always going to be problematic. Think in ‘04 when Romania could do their dance elements on floor and a lot of the US was downgraded.

She did crack though.

If you had told Tom what her bars and beam scores would be in Tokyo - he would not have taken her.

While Jordan has been amazing this year her entire senior career has been one of falling short of potential. The fall on floor isn’t out of character for her and she has always dealt with nerves. The coaching change has been great and she wouldn’t have been on this team if that didn’t happen but she is still Jordan Chiles. She’s been known to fall.

true but I guess I was referring to how she did in TQ and then with VERY little notice in TF, she did much better than I was expecting… I was thinking at least 2 falls on BB

Carly Patterson was the only one on the 2004 US team who could get her dance elements credited unless she really flubbed up like in prelims. Still not sure how Mohini managed to in prelims to make floor finals.

Best E scores from O”s(leaving out routines with falls to focus on straight E):

It really is everything.

So you have the score comparison for the rest of the US team? Very curious.

Best E scores from O”s(leaving out routines with falls to focus on straight E):

It really is everything.

You can’t compare “best” with “averages”.

Or are you demonstrating that Jordan’s best Tokyo scores weren’t even close to her average USAG scores?

true but I guess I was referring to how she did in TQ and then with VERY little notice in TF, she did much better than I was expecting… I was thinking at least 2 falls on BB

It wasn’t “very little notice”. She had been training to do AA in TF for weeks.

She was only pulled from the bars and beam line ups after she bombed prelims.

And if your expectation of her was that she would have at least 2 falls on beam, why on earth was she on the team? Team USA can do better, no?