this so so cool! I hope she goes to a world cup or worlds this year and gets it named after her! Would it be an F you think?

Yep, I hope it gets named after her !

The WTC has, shockingly (not), been pretty illogical with regards to the valuation of skills like this. It depends on which precedent (or not) they follow. Releases typically get bumped a letter if preceded by a closer-bar circle, but not transitions or non-flight elements, and this is the first flight or release to come from a fwd close-bar circle, IIRC.

‘F’ seems unlikely, and I’m not sure I’d even want that, considering that would put it in the same class as a Counter-Kim, Nabieva (next quad), Tweddle, and Layout Jaeger. Still a cool skill, and nice to see some originality.

I would like for her to get it named after her but it sounds like she’s done based on this interview. https://www.usatoday.com/in-depth/sports/columnist/nancy-armour/2021/06/12/laurie-hernandez-gymnastics-usa-olympics/7656463002/

I would think this would be an E but maybe an F. Is this more comparable to a Jaeger or Sim’s front hip circle + Comaneci? 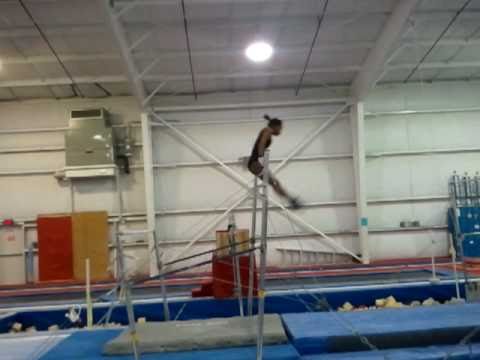 I’m happy for Laurie- really wish she was going for worlds and not the tour but so glad she’s going to pursue a life that makes her happy. That knee injur was just so unfortunate but she seems to have a really positive and perceptive outlook on everything right now. Whatever she does, I’m sure it will be amazing.

Also: I need a thread of Simone bloopers like Laurie is posting!

Can someone explain in technical terms what she is doing and what, if any, moves are similar? The first thing she does (the stalder, right?) Did she hesitate on that or was it supposed to look like that?

(Related to nothing, one of the next videos down was this Ellie Black comedy routine, and I laffed and laffed. https://fb.watch/65i3FIf5eq/ )

That’s not new , I saw this skill on youtube years ago , can’t remember who did it but probably a couple of gymnasts

Totally. I’ve seen this before but can’t remember who.

Was it a Chinese gymnast?

She’s doing an Endo (I.e. a front stalder) into a straddled jaeger.

Kinda looks like a Comaneci. But instead of from a kip cast it’s from an Endo.

I think it shoild get an F but I imagine they’d give it an E.