Anyone know about this?

Has been discussed for a few days on the session 2 of classics thread. Very, very odd decision.

Officially confirmed, though the article doesn’t provide any additional insights: 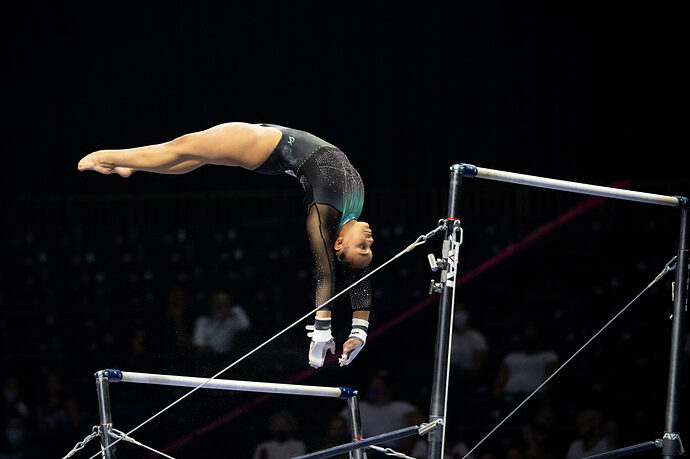 Konnor’s mother Lorinda confirmed the news and said her daughter began training at WOGA on Tuesday (May, 25th) and will now be coached by Valeri Liukin.

Got it… totally haven’t read that thread in a bit. Here is a link to that part of the thread…

[image] We haven’t received clarification or further comment, but Konnor McClain’s club has been changed on USAG’s website from Revolution to WOGA.

The whole thing is so completely nuts. Switching gyms with less than 2 weeks to nationals. Moving halfway across the country. Going to Valeri, who has a terrible track record with seniors not named Nastia and hasn’t coached a senior since 2013.

I wonder if there was a degree of emotional upset greater than physical illness at play in Konnor’s Classics performance?

At a minimum I can imagine that leaving your home, friends and possibly family (if they’re not coming with) would make a person emotional, not least a 16-year old.

I think at the time (during Classics) that she looked like she wanted to throw a tantrum and cry. I’d be wanting to do that if I was forced to be at a meet with coaches I was dumping immediately after the meet. Who knows what happened - I’m sure there are gossipy details. Valeri will certainly generate a few tears…he doesn’t seem to provide many platitudes and hugs to motivate his gymnasts.

It could be something as simple as switching in time for Nationals in the hope that a WOGA leotard will boost her scores a bit. Besides, she has another 4 years with a coach if she genuinely is aiming for 2024, so why not change if Valeri is looking to take on a senior now.

This would NEVER have happened with Marta still in charge. LOL

Valeri taking on a high-profile senior like Konnor must mean he’s finished with Brazil. At first I thought he may just be coaching at WOGA because of the covid situation; now I think he was probably let go.

I’m NOT looking forward to the NBC commentary at nationals next week if the coaching change gets mentioned. Tim will be like “She recently began training in Texas, with a coach who Nastia knows very well!”

Valeri was only contracted until end of 2020 as Consultant. Brazil either chose to not renew his contract or Valeri chose not renew the contract.

The heat is now off him and he can resume coaching again.

Valeri has a few junior elites, too. Two of them qualified to nationals. I don’t know if they’ve come up through the levels with him, or if he took over elites at Plano recently.

I guess all is forgiven!!!

Just about anything can be forgiven in elite sports, it seems. To be fair I’m not sure that Valeri is any better or worse than the average US elite coach, though I realise that’s hardly a recommendation.

Atler’s experience when she switched to Valeri sounded pretty terrible.

To be honest, Atler was completely done after 1999. Her experience at Worlds was horrible and for all intents and purposes, she was ready to call it quits. On top of dealing with injury and having no head coach (she left Rybackis right after Nationals), at Worlds she was coached by National coach Artur Akopyan, was not in 100% competition form due to missed practice, and then reinjured her ankle during the All Around. Not a pleasant time for sure.

Unfortunately due the pressure that Nanette put on her, Atler really had no way out.

You could tell early 2000 that her heart was not in gymnastics anymore and she was simply going through the motions.

It wasn’t just Atler who had a terrible experience with Valeri.

Valeri should be banned lmao. The motherf*cker didn’t even allow Atler to drink water, and Ohashi was maybe days away from a disc slipping.

Did Valeri treat Nastia any differently? I’m just wondering if he knew what was acceptable or not.