Check out this article from USA TODAY: 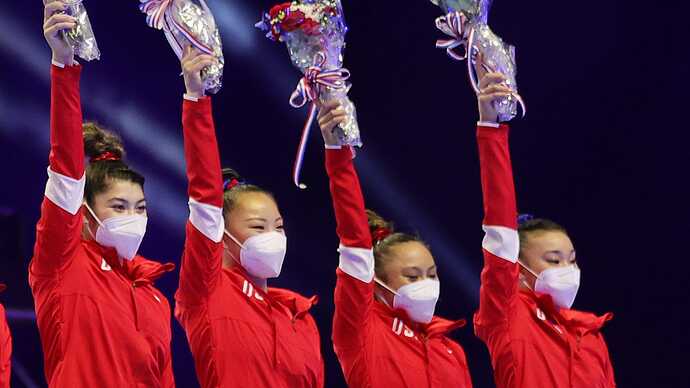 Alternate on US women's gymnastics team tests positive for COVID-19

The local government in Inzai, a Japanese city where the US Olympic gymnastics team was training, announced that a teen gymnast tested positive.

Poor kara, girl can’t catch a break. What does this mean for the team?

They were pictured at the Olympic village earlier today, so I assume they are not counted as close contacts and are good for now. (really hoping they remain negative!)

Discussion is also in the sickness/injuries thread.

And Leanne is considered a close contact, so also quarantined, right?

Must be terrifying for the team that even a vaccinated team member tested positive.

I’m sure they were all hoping it was going to be another false positive.

Did we hear who it was?

An alternate on the U.S. women’s gymnastics team has tested positive for COVID-19 and been put in isolation, just days ahead of Opening Ceremonies at the 2021 Olympics in Tokyo.

KSHB reports that Eaker is feeling fine and is asymptomatic. Eaker previously said in an interview with KSHB that she had been vaccinated against COVID-19.

NBC News reports that Eaker was in Japan for training in the town of Narita, about 35 miles east of Tokyo, when she tested positive.

Another team member has been identified as a “close contact” of Eaker’s and has been placed “on standby.”

The U.S. women are seeking their third consecutive Olympic gold medal after winning the overall team competition at the 2012 and 2016 Olympics.

Must be terrifying for the team that even a vaccinated team member tested positive.

This notion that vaccination is a complete protection is ridiculous. For sure not with the delta variant. Israeli studies have determined Pfizer is 64% effective against symptomatic covid with the Delta variant.

I am sure NBC will have a FIELD DAY with this information.
Between Gina Chiles and Kara Eaker testing positive there is plenty to discuss…you know instead of getting routines.

But when you have an unvaccinated team member on your team you probably assume that it’s not gonna be you first. I’m sure Kara is asking “why me?” as she sits alone in her room for 2 weeks.

It’s like the healthy 40yo non smoker getting cancer before their 70 year old chain smoking father. It’s human nature.

But when you have an unvaccinated team member on your team you probably assume that it’s not gonna be you first. I’m sure Kara is asking “why me?” as she sits alone in her room for 2 weeks.

There is a lot of seemingly random behavior when it comes to this virus.

I wonder if Fong has to isolate with Kara and Leanne?

Apparently the Fongs were told they don’t have to, but “will stay with their athletes as always”.