Does anyone know wtf happened?

They dozed off a little towards the middle of milos 96 ub routine? Hardly something you can criticise them for 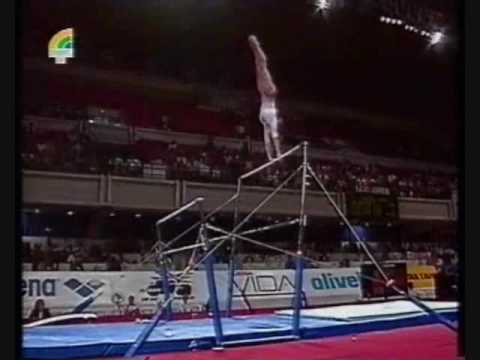 Which article is this from on Gymnastics History?

I dunno I should have kept the link.

Despite being an individual apparatus World Championships, semifinals were actually supposed to be judged using Competition II (all-around) rules, and not Competition III (event final) rules. However, the judges inadvertently used Competition III rules so the start values were recomputed to reflect this.

On paper, Milosovici’s semifinal routine did start from a 10.0 under either set of rules. However, because she often finished the giant full more than 10 degrees past handstand, it would get downgraded from a D to a C, meaning that she didn’t have enough extra D and E elements for a 10.0 SV under Competition III rules. In 1996, Milosovici would change the second half of her routine in event finals going from giant full + blind change + double front dismount to giant full + Tkatchev, then blind change + double front dismount. The addition of the Tkatchev gave her the additional tenth she needed for a 10.0 SV.

Other than Liu Xuan, it doesn’t look like any of the finalists’ routines would have been impacted by this error. Similar to Milosovici, Liu’s routine also started from a 10.0 SV on paper but downgrades on her giant fulls kept her from having a 10.0 SV under Competition III rules.

Despite being an individual apparatus World Championships, semifinals were actually supposed to be judged using Competition II (all-around)rules, and not Competition III (event final) rules.

I love that picky details of past competitions are still being brought to light.