Only the Eastern Bloc judges were stricter.

Double Layout: 0.3 landing, probably a flexed foot option that I won’t take (she does flex midway through the second salto but I feel like there needs to be reasonable accommodation too, ya know, get ready to land on your feet lol)

I took all the same deductions as you except two:

I did also deduct more for loss of balance / control on the landing of the Gogean though, and that’s how I got to 8.6.

Crossed legs are definitely a deduction, and I don’t think it’s a necessary technique. Many gymnasts have done them without any cross, several with a step out.

I guess it depends when the cross occurs. If it only occurs during the split of the legs to enter the round off, I probably wouldn’t deduct.

This highlights issues with both the COP and its application as it exists. The DLO hop was larger than her Double Tuck, but was it 0.99 or 1.01 meters? While the COP tries to be objective to a fault in the case of a 0.99 vs. 1.01 meter step (requiring a 300% larger penalty for a ~0.1 meter difference), those giving scores should have expertise and authority to make judgment calls.

Just like YTers who (understandably) wanting to deduct a poorly defined tuck in a Silivas, you want to apply an exception to a form break on a Front 1/1 that doesn’t exist. The leg separation happens too early to ignore, but if it came later, there shouldn’t be anything wrong with 3 judges taking 0.05-0.10 / 3 taking 0.0-0.05; or, on the DLO, 3 taking 0.10 / 3 taking 0.20. Allowing for small differences of opinion leads to a fairer outcome.

Crossed legs are definitely a deduction, and I don’t think it’s a necessary technique. Many gymnasts have done them without any cross, several with a step out.

It’s not “a necessary technique” but it’s “a technique” and it’s not prohibited. You can’t deduct technique you don’t like unless the WTC has made rules about it. (And they have rules for just about everything… but not this.)

Legs crossed in the air on a front full stepout, before opening up into the “stepout” phase, is surely a deduction. There doesn’t need to be a rule specifically about it, that’s already part of the listed deductions. Not having a rule exempting it is the bigger tell.

Feet apart on landing for another .1, and she crosses her feet during the first half of the move, which is an additional .1 on top of leg separation in the second half of the move.

Nah, I don’t buy it. There’s nothing about the step-out skill itself that requires her legs to cross this early, before she’s even completed 180 degrees of twisting in her front full. Separating the legs to initiate the step-out is necessary, but not the same as the early crossing, see Simone for comparison here.

That said you’re definitely right about her double layout hop. A full meter is practically a body length for these tiny gymnasts…

I thought a distinction was warranted between her controlled, small, single foot step like on her opening pass versus a pronounced, uncontrolled two foot hop back – but I suppose the code itself makes no such distinction. 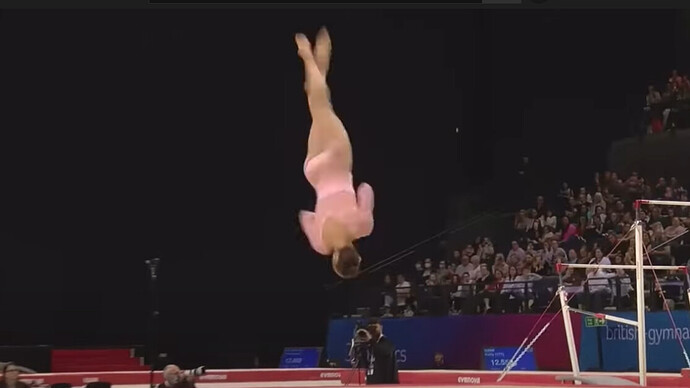