I don’t know why D’Amato tries a Double Wolf on both floor and beam and neither look anything close to being good.

I didn’t like the landing on her triple full either. Yeesh made me wince.

What has Italy done for this new incredible set of gymnasts to come through? Did they have a change of coaching staff 6/7 years ago? Did they get extra funding?

Normally this “step up” in quality comes from the extra funding a host country gets during an Olympics. It certainly happened post-London and post-Rio.

With Italy, I don’t get it!

Could it be that the sport gained a lot of popularity in Italy with “Ginnaste Vite parallele”?

What has Italy done for this new incredible set of gymnasts to come through? Did they have a change of coaching staff 6/7 years ago? Did they get extra funding?

They just got lucky with a talented group of girls at once. Iorio, Villa, and the twins all happened to get to Brixia at the same time.

Who are the Brixia Four? Are they all from the same gym was it all a coincidence how did it work out?

The Brixia Four are the junior gymnasts who came up together and often competed together as one of the top junior teams in the world in 2017 and 2018, including Giorgia Villa, Asia D’Amato, Alice D’Amato, and Elisa Iorio. I believe Villa had been at the gym since she was about six years old, and the twins moved there a bit later but they were competing with Brixia as early as 12 so the move was still pretty early for them as well.

Iorio actually trained at Panaro Modena in her hometown through 2016, but was recognized for her talent on bars, and she moved to Brixia in 2017 to get to the next level (this happens often…it’s kind of unofficially the “national team gym” with nearly every talented junior ending up there at some point in their career, since Brixia’s coach, Enrico Casella, is also the national team coach). Iorio, Villa, and the twins made their international debut together at Gymnix in March of that year, and barring injury, they competed on every Italian junior team together as well as on many senior teams together, all winning bronze at world championships in 2019.

I really thought when I first saw them in 2017 that the four would go to the Olympics together, but Iorio unfortunately had several injuries that held her back as it got closer to 2020-2021, limiting her to just bars and beam, and then Villa was injured after being named to the Olympic team in 2021, forcing her to withdraw. But they were such a fabulous team and all four worked so well together, and it was kind of magical to watch them grow together over the years, along with others – especially Vanessa Ferrari, Martina Maggio, Lara Mori, Desiree Carofiglio, and now Angela Andreoli – who work really well with them. 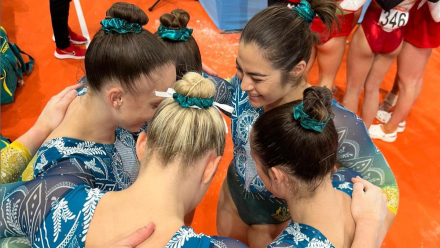 You Asked, The Gymternet Answered

Does Australia have a chance at qualifying a full team to the Olympic Games in 2024?

Could it be that the sport gained a lot of popularity in Italy with “Ginnaste Vite parallele”?

Is there some place to watch this?

I used to watch it on Youtube back in the day, but I doubt it’s still up. I couldn’t find it with a quick search.

I think it is more than just being lucky. Yes, they did have a talented group of athletes, but they also have as the president of the FIG WTC, an ITA. I don’t say that this gives them a boost in the actual scoring at events, but they certainly have an advance notice of changes that are coming, what to focus on etc…so they show up very prepared - and this preparedness helps them to score well.

Also, I think the coaching group is very pro-active in their approach.

Replying late but I suspect a lot might be due to the influence of Vanessa Ferrari. She won worlds in 2006 which was huge for Italy. I’m sure there was a bit of extra funding off the back of that. Plus I bet a load more little girls took up gymnastics.

I’ve often thought that these things go in cycles. For example my working hypothesis for the incredible depth USA had in 03-04 is that it was down to the massive spike of interest driven by the magnificent seven. A lot of inspired 8-10 year olds probably fed into that cohort.

Replying late but I suspect a lot might be due to the influence of Vanessa Ferrari. She won worlds in 2006 which was huge for Italy.

Also, previous to Ferrari winning All Around gold at Worlds, the Italian team won their first ever team gold medal at Euros and it was a huge upset over Russia and Romania making victory even more sweet as it was unexpected.
2006 was an impressive year for Italian gymnastics and they continued to grow from there.
Definitely staying with the hunt for World and Olympic team finals as well as in the hint for European individual and team medals helped along the program.
They were no longer a Tier B or Tier C team.

Oooh yes of course. I’d forgotten about that.

I think they are. It’s pretty much expected now that GB athletes will be medals contenders at Europeans and certainly finalists at Worlds and Olympics. Even getting a couple of medals. Prior to Beth, that never happened. Men too since Louis Smith and Max Whitlock.

Possibly. But I wouldn’t say anyone has great depth at the moment, even the US. If it wasn’t for the returning NCAA athletes, I don’t think the US would be medal favourites. Italy are likely to suffer with their 2 injuries, Brazil would struggle without Flavia and Rebeca.

If it wasn’t for the returning NCAA athletes, I don’t think the US would be medal favourites.

Spencer put the US at 7th without the NCAA athletes (I think that’s highest three average scores over 2022).

The team would be Jones, Blakely, Zeiss, Fatta, and Matthews if going by rank order.
Not sure 7th would be their destination but a medal wouldn’t really be guaranteed unless they went 12 for 12 in team finals.
Likely Jones and Blakely would do AA in team finals. Zeiss VT/BB and Fatta FX and likely bars. Matthews probably just a back up based on her inconsistency this year.

I’d put Fatta on vault, Zeiss on bars and beam. Floor would be a toss-up because Addison hasn’t been very consistent on that this year and Lexi has.

I’m having trouble believing there are 6 teams that would beat Jones, Blakely, Zeiss, Fatta, and Matthews, given that Jones and Blakely could just do decent AA in finals, and I assume their scoring potential puts each of them within top 10 in the world? But, you know, Spencer and his spreadsheets versus my general impression…

But I guess I’m curious why this hypothetical keeps popping up – heard it on Gymcastic and now here. The central point folks are making is spot on, the depth in USA is surely less than in quads past. We’re used to seeing fresh young talent emerge each and every quad who can rival or even best the veterans – which does seem to still be happening in Russia and China – but perhaps it’s a double-edged sword for these centralized training programs that expend/exhaust/traumatize their talent pool such that it needs replacing every quad.

But yeah I just don’t see why the depth discussion would exclude NCAA/elite gymnasts, when it should be a feather in the cap of USAG that we’re seeing Carey/Chiles/Wong stick around and perform at the highest level. Plus, if the void in the senior elite ranks were even bigger, maybe Suni and Grace would still be competing, or maybe Konnor would be out in Liverpool hopped up on vicodin.