Has there ever been any BLATANTLY incorrect line judge calls for OOB? Thought this might be a good idea for a thread down memory lane.

But she got a 0.3 OOB. In real time, you’d be forgiven for thinking this was two feet; but I genuinely think it was just one foot. Is there a rule that says “if one foot is OOB and the other foot is in the air, then it counts as two feet”?

She was in 14th (13.266) in prelims. Give her two tenths back, and she’s in 10th and equal with Tisha Volleman (who was First Reserve for EF) and would have beaten her with higher execution.

The first one I thought of was VVDL in the 2002 Euros FX EF.

The flag went up just before she ran for her final tumble pass. You can hear the audience reacting on the video and I remember her coach trying to intercept the line judge on their way to handing in their OOB report. Message boards at the time were full of screenshots showing that she didn’t go out. Not sure if this qualifies as blatant!

So, this one of course:

Full foot out on the last pass, but smiles, whatevs, yay!

Aaaaand the best 10 evah, yay! foot out on a punch front again but, communism, whatever, 10 for her! 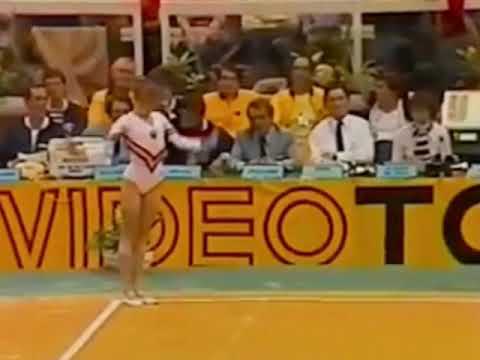 Nooo, that’s just because NBC had a bad angle and are fuckwits. From this angle it’s not even that close.

I feel similarly about Shilese. It’s too much.

All the MG Elite athletes were like that. Super annoying. Which also tells me it’s Maggie’s style and she has no idea how to bring out the personal style of individual athletes.

Feel the same way about Adriana Pop. You could always immediately tell a Pop-choreographed routine. The only person who I felt successfully took a Pop routine and made it her down was Daria Joura.

oooh good reporting! I should have known better

Tbh, even if she didn’t go out of bounds, she should not have gotten Silver.

“Out by at least three inches!” 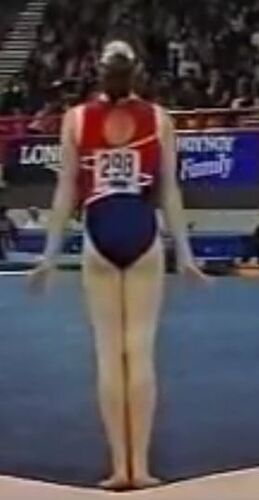 Watching NBC 2000 videos made me realize how there was a lot of hypocrisy around the Russian team wanting to win and extremely determined to the American women demonstrating the same personality/behaviors years later.
Russia were the DIVAS where as the US women were represented quite the opposite.

Yes, NBC do have an unfortunate history of becoming triggered when a Russian woman looks like she might have the temerity to beat the Americans.

In this particular case, you have to wonder whether Al would’ve been so quick to come out with the three inches OOB claim if she’d been wearing a US leotard. It’s not a great angle to make an OOB call at all, much less that someone was three inches out.

God that fx rotation lobaz-zamo-prod-khorkina is something else, really. I don’t think there’s a repeated line at all in those routines? Maybe a double front twist- punch front?

Easily my favourite fx rotation ever

This is qualis, she didn’t get shit here

God that fx rotation lobaz-zamo-prod-khorkina is something else

The level of fail they had to achieve so that even the TF floor rotation wasn’t enough to nab gold is still remarkable, nearly a quarter of a century on.

The level of fail they had to achieve so that even the TF floor rotation wasn’t enough to nab gold is still remarkable, nearly a quarter of a century on.

My favorite thing about it was the Arkayev plants that everyone was so mad were there were the only ones that didn’t actually fall off anything.

You’re not deliberately excluding Furnon here, are you?