Gymnasts Who Have Made Verbal Confirmation to Commit to Paris 2024

Ferrari and McCusker commit to Paris 2024
And Suni too!

Have we heard anything from Simone, other than her pre-Olympic statements?

It’s less than 3 years away, so why the heck not!

Where was this stated that they both intend to train for Paris? 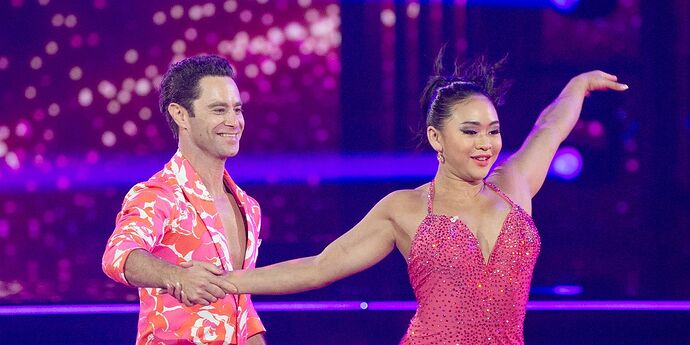 The Olympic all-around champion—and Auburn University—are trying to pull off an unprecedented juggle of college gymnastics and cultural stardom.

Sunisa Lee’s plan after winning the Olympic all-around gymnastics title was to attend Auburn University, live in a college dorm, and gear up for the NCAA season.

Right now, however, she’s spending most of her first semester in Los Angeles, taking classes online and training for hours each week for “Dancing with the Stars.”

She won shortly after a historic change in the NCAA’s eligibility rules positioned her to be the first holder of gymnastics’ most coveted crown to do it all: compete in college gymnastics while cashing in on the post-Olympic opportunities that come with a role once defined as “America’s sweetheart.”

But one thing didn’t change. Lee doesn’t have the ability to bend time the way she can dominate the air on the uneven bars. She is still living with the same calendar as everyone else—one in which the start of her freshman year coincided with the post-Olympic period that is the main window for new stars to cement their fame.

That has meant tricky choices for Lee, her new agents Smith & Saint, and Auburn. One of them came up almost immediately: whether to sign on for the new season of ABC’s “Dancing with the Stars,” which began airing on Monday, or join Simone Biles’ 35-city “Gold Over America” exhibition tour, which opened Tuesday in Tucson, Ariz.

Lee said no to Biles and yes to ABC. Now, “Dancing with the Stars” is an early test of whether they can pull it off both from a competitive and a commercial standpoint.

“The way I look at it, everybody’s watching to see how we handle this because this has never been done before,” said Jeff Graba, the Auburn head gymnastics coach, from L.A. as he spent the week there with Lee. “Everybody benefits if we get it right.”

Auburn stands to gain not just from Lee’s television appearances this fall, but her presence in matchups with powerhouse Southeastern Conference schools when the NCAA gymnastics season starts in January. And Lee will get the chance to compete weekly. That’s a departure from previous U.S. Olympic all-around champions, who typically took at least a year off after their victories, if they ever returned to the mats at all.

The sisters who founded her agency, Madison Smith and Britt St. George, said they want Lee to have her college experience. But they also want “to set her up for life,” and sometimes, they said, that meant seizing a moment.

There was a long discussion, they said, that led to choosing “Dancing with the Stars” over the Biles tour.

“‘Dancing with the Stars’ gave her the opportunity to be a student,” said Madison Smith. “Even though she is doing it virtually, every single day from 8-12 in the morning she is doing classes,” which have been pre-recorded, meaning she doesn’t have to get up to keep to Alabama time. She does work on the show in the afternoon, and has the evenings for more schoolwork and other obligations.

Doing school from a tour bus, everyone agreed, would have been harder.

The other factor, they said, was that “Dancing with the Stars” created a significant platform for Lee, appearing on national television once a week, talking about what matters to her, and showcasing her skills beyond gymnastics.

(Neither “Dancing with the Stars” nor Lee’s team commented on the salary for appearing on the show. Variety has reported that the paycheck starts at six figures.)

“It’s great to continue to capitalize and to give her visibility after the Olympics,” said Smith. “We can’t really defer ‘Dancing with the Stars’ until next year…We don’t know if she’d be offered it again.”

Auburn’s Graba said school officials, up to the university president, had no doubt they would back Lee. But the circumstances of Lee’s dual quest for collegiate competition and cultural stardom required them to do things they have never done before. So when Lee moved to L.A. two weeks after she arrived at Auburn, Graba and an assistant coach, Ashley Johnston, followed. One or both of them have been in L.A. with Lee for much of the time since she arrived—they are now taking turns — while another assistant coach works with the rest of the team back in Alabama.

“She’s our athlete and it’s our responsibility to be out here,” said Graba. “She’s a young person who has three full-time jobs and I’m trying to help her manage her schedule as much as anything else.” That includes making sure she fits in conditioning and therapy, and now cranking back up to some gymnastics training on the uneven bars, which is happening when there are openings in her schedule.

“You have to embrace the fact that this is the new realm of the NCAA,” Graba said.

Britt St. George said that they would plan endorsements and other opportunities around the NCAA season, and take it semester-by-semester from there.

She also said that social media—her agency’s specialty—would make it easier for Lee to fit in deals, and that they expected to focus on areas such as fashion and beauty, and products that Lee actually and believably uses.

“America’s sweetheart” won’t be a motif they’re leaning on. “That’s not how we’re marketing Suni,” St. George said. “I think that traditionally ‘America’s sweetheart’ maybe isn’t edgy, isn’t vocal about social issues…If she wants to speak on those types of topics, and I know that she does, allowing her to have the freedom to not be labeled as certain things is going to be important.”

“We’re able to kind of build out deals that allow her to also be a college student, without these traditional super-heavy-lift multidimensional athlete endorsement-type deals where there’s appearances and TV things and photoshoots and all these things that take up so much of her time,” St. George said. “Social media-based deals are definitely an easier lift, they’re easier to execute, they’re as lucrative for her.”

hat approach has drawn other Olympians to the agency, including Nastia Liukin, who has worked with Smith & Saint since 2018 and said she suggested to Lee in Tokyo that she talk with them as the new champion faced a sudden flood of interest.

Liukin recalled that Instagram wasn’t even a thing when she won the Olympic all-around competition in 2008.

“I just had a personal Facebook, and I think I got Twitter right after that,” she said. “Times have definitely changed.”

Appeared in the September 23, 2021, print edition as ‘Sunisa Lee’s Post-Olympic Juggle: Auburn and ‘Dancing With the Stars’.’

I changed the thread title @Doug1233 so as other gymnasts confirm their commitment it can be discussed here. Lorette Charpy has also made her intentions to commit to Paris already.
I think we will hear more commitments toward Paris after Worlds and probably some more retirements also.

The first post doesn’t make sense now because Riley was only mentioned in the thread title.

The first post doesn’t make sense now because Riley was only mentioned in the thread title.

I’ll be honest, my gut reaction to “Riley McCusker commits to Paris” is not dissimilar to one I get from takes like people really wanting Amanars from Lee and Hurd (https://twitter.com/poorlawyer/status/1263229887244091395).

I mean, Riley was looking great before that silly injury on the DTY at Classics.

With all the judging focus turning towards body shape and execution, she’s really the direction in which the Code is moving. If she stays coached by Brian, I can see her improving.

It’s a shame she wasn’t able to hang on injury free for Worlds. She would have been a lock for that team.

I guess we are also used to her looking (and being) so fragile that even three years seems like a large ask. But if her training environment is improved and they are prioritizing safety and health, it might be possible.

I mean, Riley was looking great before that silly injury on the DTY at Classics.

With all the judging focus turning towards body shape and execution, she’s really the direction in which the Code is moving. If she stays coached by Brian, I can see her improving.

It’s a shame she wasn’t able to hang on injury free for Worlds. She would have been a lock for that team.

She was, but there’s always something silly and she’s always a great fit for every team until whatever it is happens. There has been a McCusker-shaped hole in every major US squad except Doha, but USA has to work with the circumstances at hand. She was still in and out of a boot a few weeks ago at Florida and presumably wants to compete for them at least 1-2 years before Paris.

Combine the injuries with her being not the quickest gymnast and not having great technique, and I’m not sure how more elite is fruitful for her. I guess we will see how much leeway 5-3-3 provides US specialists, if at all, because UB/BB should go nicely with a Biles or Carey VT/FX run.

Yeah. I don’t see McCusker making a serious run at Paris unless she specializes at Florida on UB and BB only and then defers 2024 year.