Judging the rest of Nationals Day 2 and I saw this from Eaker.

Watch to the very end …

Nay
I hate it. I have always hated it. Every time they do it, I roll my eyes at the pretentiousness and think, “Girl, please!”
Even worse, when they do it half ass walking off, looking uncomfortable and awkward.

That’s a NO from me. It worked for Terin Humphrey but everyone else after from GAGE is a nope.

I have a bit of a soft spot for Ragan’s Exit here:

If it had been the ballet style bow where the arm is swept down the leg (more presenting to the audience), I would have been fine with it. I don’t love the gathering in the applause style bow in general. That is my default reaction, but I’m not sure I love what that difference says about my expectations of and attitudes towards the athlete. I need to think about it more.

ETA: No issues with Ragan’s. It was just a cute touch at the end to me, and she’d clearly saluted and ended the routine, which is usually my gripe

I STILL can’t believe how tone deaf, KZB was with using that FX music for Ragan Smith, who was under 18. The Wolf Whistle/ Cat Call was absolutely horrendous and given the sexual abuse scandal/ Nassar revelations it was totally inappropriate.

Ha I’m less bothered by it. But not great timing, sure.

But what about her lil bow at the end? I thought it was cute and matched her style very well.

14.466 too. Still a v competitive routine. Will end up being one of the highest non-Simone FX routines of the quad. Would have easily beaten both Suni in Stuttgart and Morgan in Doha for silver in 2019 and 2018.

This Entrance is SO Russia

That Switch Ring is why we give Kara’s a 3…

Still bothered by it, the bow thing wasn’t horrific, but seemed a bit childish to me. But Smith was always slightly immature looking as a senior.

This was a bit… much…

I have a feeling that after 2017 they released a rule that said excessive entrances would get a deduction?? And after that we stopped seeing them so much.

I can’t think of any of the entrances that have bothered me, as long as they’re just an eight count-ish. Melnikova’s was a bit long. We gripe about floor not being artistic enough; well, setting the stage is one way enhance the artistry of a routine. It obviously shouldn’t be included in the artistry judging, but ultimately I’d rather have a bit of stage setting and an exit flourish then ‘march on, mechanical smile and some arm waving or shoulder wiggling, march off’. It’s nice when you get the feeling they’re having fun with it.

HATE them. I long for the days of Bogi stalking on and off the floor.

That’s fair. I have absolutely no issue with the lack of pre/post routine choreography either–I just don’t mind when they do it. I’m with you on the stiff march on/march off.

I can’t get over the fact that she’s doing a “3’5” and a triple in that routine. Al fong would totally win the downgrade Olympics

this entrance is acceptable to me, though I’m not crazy about this generally speaking. Anything more it’s a bit of an overreach

but of course this routine gets a pass from me, because I lurve it all

Remember the punch front exemption @onodian ! No downgrades for the 3.5.

I’m more worried about the 3.0 and subsequent 2.5. And it actually happened night 1. 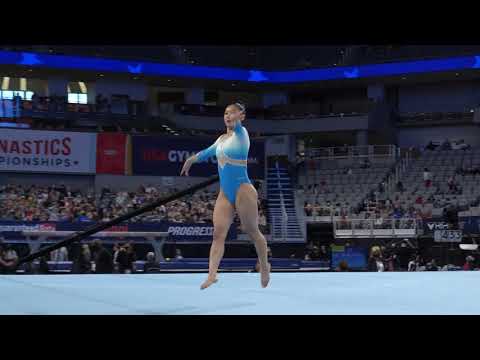 That third line was a front full. Lost a D and 2 tenths CV.