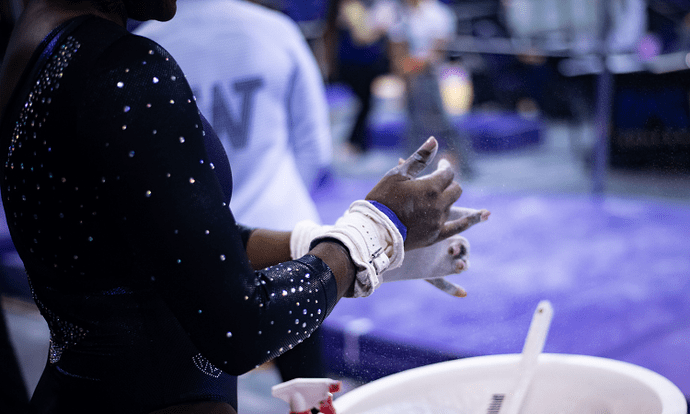 The NAIA Division I institution—part of a college athletics association for small colleges and universities in North America—will award athletic and merit scholarships and has a goal of entering into an independent conference and competing as a USAG nationals-eligible school starting with the 2023 season. A search for “an experienced collegiate gymnastics coach” has already begun, with the intention of having the role filled before level 10 nationals in May.

“We could not be more excited to launch the first HBCU intercollegiate women’s artistic gymnastics team,” said Fisk University president Vann Newkirk. “Fisk University has always been an educational leader, and this women’s gymnastics program will embody all the qualities that define the Fisk experience: excellence, determination and a commitment to a better tomorrow.”

Since 2015, Brown Girls Do Gymnastics has been a driving force in advocating for gymnasts of color to have an opportunity to continue their athletic and academic careers in an inclusive environment like a HBCU. Fisk University joins a 7-year grassroots effort toward inclusion and the creation of new opportunities for gymnasts.

I wonder what conference Fisk will join. SEC makes sense but I don’t know if that will happen with Oklahoma coming soon. Or maybe they will remain independent since Gulf Coast Athletic Conference does not have a gymnastics conference (though no teams are independent any longer).
My other guess would be EAGL as that conference is made up of teams that don’t have a conference sponsoring gymnastics, plus ACC is forming and EAGL is losing Pitt, NCS, and UNC.

Spelman College is typically the top ranked HBCU however, the school has eliminated their entire athletic program to focus on mental health and physical fitness initiatives.

I know. But who else will the compete against?
They specifically stated USAG nationals which is for small colleges and universities.
MIC makes sense. Fisk is in Tennessee so I just automatically went SEC in my brain.

So I read today that Fisk plans to compete next season (!!!) and do at least 5 meets. They also want to join the GEC, since that is a mix of D1 and D2 teams.

These small schools generally have the typical teams of baseball, softball, basketball, soccer, track as they are generally less expensive sports and also are more common with the general population.

However, most of the smaller schools also develop a strong niche sport, whether it is curling, dance, acro and tumbling, fencing, squash, crew, water polo, sailing, lacrosse, etc. It usually draws in a particular group of student athletes.

In fact if you look at Acro and Tumbling other than University of Oregon (#3), Baylor (#1) the other 28 schools sponsoring it are all small universities and colleges.
Azusa Pacific (#2) is a smaller university (10,000 student half undergrad/half grad) and the Acrobatics and Tumbling team is a huge draw for them and very popular at the university level. They faced Baylor in the final round at Nationals last year and came just short of clinching their first title.
Oregon and Baylor are the only team champions.

It also helps that Fisk is a HBCU and is also being helped along by Brown Girls Do Gymnastics initiative.