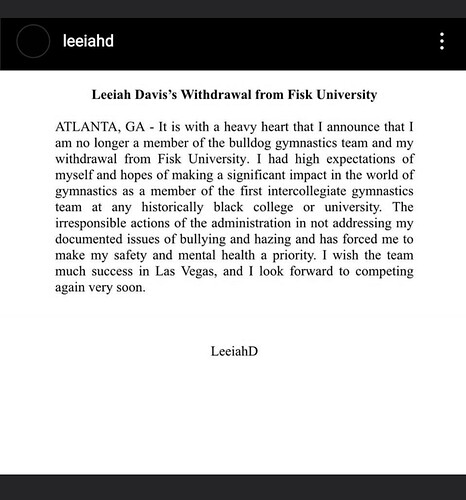 Just saw this on Twitter. No idea what’s going on there. I mean it doesn’t necessarily have to be the within the team. It could be student body. Regardless of who is doing the bullying and hazing, it’s bad that she’s receiving no help from the administration, AD or coaches.

I am happy she was able to get out.

But it is troublesome that this was not rectified as Corrinne Tarver is not only the head coach of the gymnastics team but she is also the athletic director.

That is shameful on Tarver’s part.

I have no idea if her allegations are valid, but I did not realize that Tarver was both coach and AD. That is not my experience with my daughters team…that 1 person would be allowed to hold both positions. I mean how is any athlete on her team supposed to get help if they have an issue with the coach? Who are they to go to?

I do not know the podcast WeLoveGymnastics, but apparently Davis is supposedly going on with them to discuss her allegations and experience at Fisk 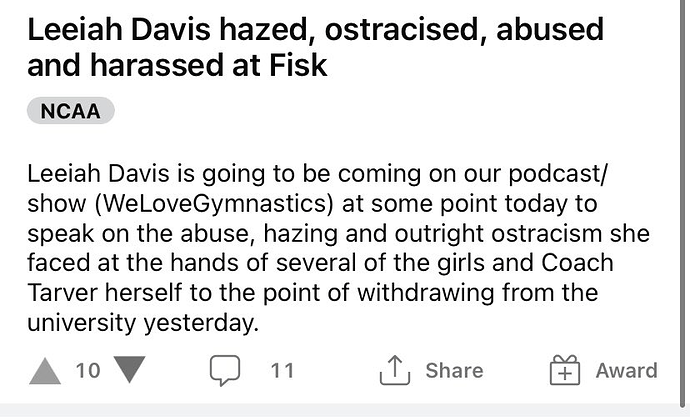 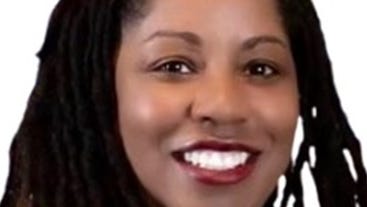 Apparently, at Fisk, the AD is also a coach. Previous to Tarver being named to the position, the men’s basketball coach was AD.

I just don’t understand why the university would do that, routinely picking an existing coach to fill both positions. Such a conflict of interest

Also, I wonder if this allegation will change that moving forward.

I have no idea if her allegations are valid,

It’s not a simple thing to leave a school. I can’t imagine she has a stake in this other than protecting herself from hurt.

I can’t speak about Fisk, but I come from the world of (very) small D-3 schools, and its the norm that the AD is also a coach. At small schools, coaching often is not a full time position, so they work in another capacity as well. Sometimes its within the athletic department, other times its for, say, residential life.

Ya, Fisk is a small university, these programs have very limited budgets and few athletic programs. So its not unusual to have a coach also serve as AD role. I would imagine, and idk about Fisk, that there are different paths if a student athlete has a complaint regarding the coach who is also the AD, perhaps a compliance officer or something like that.

Bullying/hazing at a small school (1,000 students) can be terrible because it’s such a small social environment. It’s unfortunate Leeiah Davis had to transfer but it was the right decision.

There were rumblings of stuff like this happening in the fall. When I got to worlds in November, my friend told me that she was told most of the team had not touched any equipment and nobody had floor music, let alone routines. The distance to the gym and class schedules really made everything harder on the athletes and there was very little support.

Another rumor was that the athletes that appeared on the Jennifer Hudson show were Corinne’s favorites, and that Jennifer wasn’t aware that there were more gymnasts until they got there and said she would have arranged for all of them to come.

It is interesting because the Super 16 broadcasts made it seem what a huge feat it was for the school, being the first HBCU team, putting together a competitive team in a matter of “months”, Tarver worked so hard and was promoted to athletic director…so she is an accomplished and busy woman.

There was definitely a specific narrative pushed on Fisk’s program.

I would not be surprised if all of this is covered up, glossed over, or flat out ignored, specifically because it is not only a new program but also HBCU.

Are most of the athletes on Fiske’s team freshmen?

Has the victim made any public statements as to the abuse she faced? Has there been an official statement from Fisk? I thought I heard she would be participating in a podcast.

Are most of the athletes on Fiske’s team freshmen

Mostly. There’s a few sophomores, no juniors or seniors. Some of the freshmen are redshirts, so they are in their second year of school.

Has the victim made any public statements as to the abuse she faced?

No, Fisk has not made any mention of this at all, let alone any official statement. That said, I guarantee you they won’t talk about any of this as the team is a first year program and first HBCU and will not want to make this public. It will get swept under the rug IMO.

Yes, she participated in a podcast, the episode has not been released. The last episode was from Aug 1, 2022.
However, the same podcast interviewed 6-7 Fisk gymnasts this past summer.

So, After calling a few friends I’ve been filled in as to the situation at Fisk. It seems the victim was physically assaulted (the point of chunks of hair being pulled out) by a teammate after weeks of being bullied and harassed for “not being black enough”. There are also other details that I was asked not to share with anyone and that frankly I would not have considering the severity of the situation.

One thing I will say, and I think someone mentioned up thread is that to me the Alexis Jeffrey situation was much much less serious yet resulted in a gymnastics media uproar of sorts and the ousting of the coach if I’m remembering correctly. I feel like this case is getting no attention online and frankly feel there’s a double standard. I hope the coach has to answer for what has gone on.

One thing I will say, and I think someone mentioned up thread is that to me the Alexis Jeffrey situation was much much less serious yet resulted in a gymnastics media uproar of sorts and the ousting of the coach if I’m remembering correctly. I feel like this case is getting no attention online and frankly feel there’s a double standard. I hope the coach has to answer for what has gone on.

The problem is there aren’t any sources for news media to cite. Leeiah Davis’s podcast interview hasn’t been published and no one else is publicly talking about this. Plus the general public doesn’t care that much about small college, certainly less than a public university like UCLA. People involved should start submitting tips to a reputable newspaper to get the ball rolling.

Part of the Jeffrey/UCLA drama was that Derrian Gobourne’s mother posted on Facebook (college gymnastics fans group) and other social media sites and leaked the story before it really became known publicly, so there was already traction being made and a villain edit was made for Jeffrey before her side of the story emerged.

I think Derrian’s mother dropping the story across social media outlets was really more of the cause for the story to explode because it was out there before anything else came out news wise about Jeffrey departure from UCLA.

Also in this case it was a situation with racist undertones, which will always cause headlines.

In the case of Fisk, the story needs to be kept quiet because Fisk and HBCU do not want it to get out into mainstream news because it would tarnish and ruin the whole initiative of Brown Girls Do Gymnastics and Black Excellence. The publicity that was generated for Fisk is huge and within a week of the team debut, another HBCU has announced the creation of a gymnastics team.

“Black Excellence” doesn’t have the same power and prestige when there is bullying, hazing, and assault on an all POC gymnastics team. It defeats the whole purpose of the intent of bringing gymnastics to HBCUs.