Tomorrow is the Women’s SP of the Rostelecom Cup, part of the Grand Prix!

Great to see Tuktamysheva still in it!

Yeah, I’ve basically stopped following figure skating after the Sochi Olympics but it really is nice to see Tuktamysheva still being relevant (at least I am assuming she is semi-relevant but you need quads to win these days, right?)

Sambo 70 free skates are awful this year IMO. The SPs seem better but still not at all stellar. NBC is all-in on manufacturing this narrative that Valieva actually has great programs and is “the complete package.” Lol, okay. That FS is a void.

I don’t really care what happens with Russia as long as Kostornaia makes it, which is a scary proposition, but you never know. Wouldn’t mind seeing Tuk there even if she doesn’t do the most in her programs. I miss Rika Kihira.

Tuktamysheva has been landing quads in practice, with some beautiful ones shared on Instagram by various sources. Not sure when/if she will compete them this year, but between that possibility and her consistent triple axel she is still in the coversation. I very much appreciate that, because I agree that the choreography of most of the top Russians is lacking. I feel like they are choreographed within an inch of their life- turn your head here, put your leg behind your head there, keep moving an almost never hold a pose so you can get more movement in, smile when we tell you… A few from that group escape the emotionless over-control, but most don’t. I feel like Scherbakova is better than Valieva for actually feeling the music but even she is over-choreographed.

Yeah, I’m so frustrated that the PCS scores the judges are throwing at Valieva make it seem like she has nowhere to improve when she’s 15 years old. I enjoyed Alina Zagitova’s free program in 2018 much more than I like Valieva’s Bolero free program. The music of Don Quixote is much more engaging in the first place, though.

I actually quite love Valieva’s Bolero and feel she has improved so much in a year with the program. Cool about Tuktamysheva and the quads. I too miss Rika. If I had it my way, the three Russians would be Valieva, Kostornaiia, and Trusova. I’d also accept Tuktamysheva in exchange for any of the three

Who are the favorites for the team gold medal in Beijing?

USA has to be favored with their men and ice dance, but Russia’s ladies, pairs, and ice dance give them the advantage.
Japan has the strongest men overall and have ladies that can compete, but they don’t really have the ice dance or pairs to take the top spot.
Canada is unlikely to repeat as team gold medalists but it could be between them and Japan for bronze.
Italy and China are the other two qualified teams and are unlikely to have any chance at a medal but will be fighting for that final spot in the free skate.

Georgia, Czech Republic have qualified to all four events and therefore can participate.
Germany and Ukraine are qualified under three events but wold need additional man for Germany and Pairs for Ukraine in order to have a complete team.
However, these 4 are unlikely to advance to the free skate.

Yeah, I’m so frustrated that the PCS scores the judges are throwing at Valieva…

So part of the reason I stopped watching was the PCS crazyness. There was that one ice dancing couple who could probably have gone and taken a poo on the ice and still have gotten perfect (or practically perfect) scores. I mean, maybe they really were a million points better than everyone else and maybe the 15 year old russians really are a million points better than everyone else (both technically or component-wise) but it sure didn’t look like that to my reasonably-knowledgeable-fan eyes. Just seemed like the judges had favorites and if you weren’t one of them, screw you. I guess a lot of people felt the same about Simone blowing out the competition but at least her scores felt justified (if a little inflated) or at least traceable to some metric. Maybe she didn’t get absolutely every deduction she could have but she wasn’t getting too many more gifts than the rest of the field. While in the same figure skating competition you could have a judge give a 9.50 for skating skills while another gives a 6.75. And there never seems to be any discussion of how such a spread is a) possible or b) permissible. Maybe they’ve cleaned it up since then but since the judges are anonymous, well…

Heck, just looking at the judging for the latest grand prix, the ladies winner wins by 50 points, one judge basically gave her 10s across the board…and as soon as she hits puberty or develops hips, she’ll probably be tossed aside for the next jumping bean. I mean, props to her for basically maxing out everything possible but where do you even go from that? Change the scoring system again to allow for +8s?

ETA: Though i guess if she really is a once-in-a-liftime talent and a potential GOAT (which the scoring seems to indicate), maybe I should start watching again. But it seems that figure skating has a new goat every two years or so.

I think Valieva is really excellent. She’s extremely fast, she gets unbelievable height on her jumps, her spins are outstanding, and she makes very interesting shapes. I appreciate her lyricism. There are definite phenom phases of late, but Valieva is certainly worthy of watching for her 3A and multiple quads. That combo of jumps gets her the high TES but I think her expression and ice coverage and edges are all really good too, to my untrained eye.

I find Valieva to be very physically talented. Her jumps are stellar, as are her spin positions. But her program feels especially cluttered to me, like she is rushing from one leg extension to the next with no time to actually create a moment, and I find her face is mostly blank even when she is making some sort of expression. Frankly most of her expressions look forced or pained and don’t make it to her eyes. As for skating skills, you don’t get to the ability to hit off-axis poses and big skills without some skating skills, but she’s also not yet Jason Brown, and I don’t think you should get Jason Brown-esque program component scores unless you can skate like that.

Programs we won’t see at the Olympics. 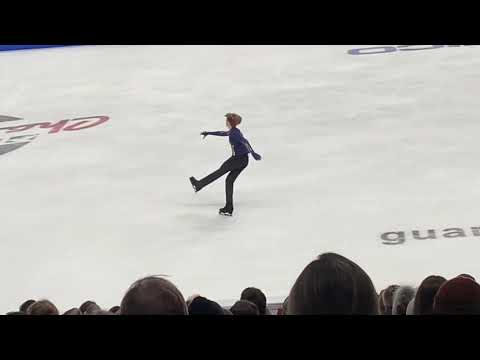 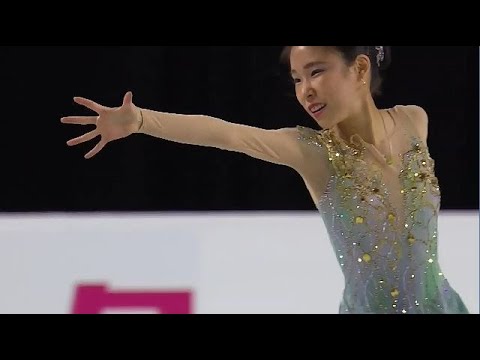 As much as I love Jason’s skating, I thought Ilia earned the trip to the Olympics. I haven’t yet watched the Japanese nationals, but I do love Mai Mihara’s gentle artistry and calm consistency.

USA is off to a great start after ROC flubbed in the ice dance and pairs.
Nathan Chen got the 2nd best SP score in history.
They lead Russia by 2 points.

Ukraine and Germany are out due to positive test with the Ukranian male and the German pairs team. They were sole entries so both teams have to take a 0 for those particular events and are automatically out.

China is leading 3rd place over Japan due to surprise pair win in the short program. Both should make finals.
Italy has a 2 point lead over Canada but their women’s performer is weak and only qualified to the team event only so it doesn’t look too good for them to make the cut.
Canada is two points behind in 6th, but Georgia is in 7th just a point behind Canada.
Czech Republic is 6th but 4 points behind Canada so is likely eliminated after women’s short program.

Nathan Chen is really proving himself.

I am starting to enjoy the team event. At first I thought it was silly, but I love getting a preview of the drama ahead for the individual events. Last night did not disappoint. It was exciting to see the US competitors do their absolute best.

I wonder why this isn’t pushed as much as the width of the balance beam in gymnastics? 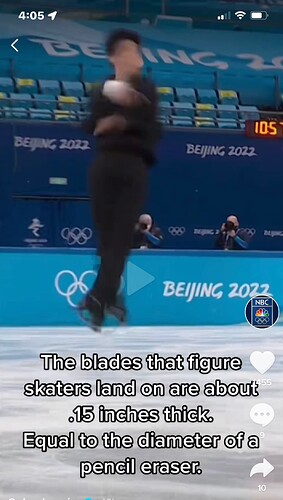 They all got personal bests, which is incredible.