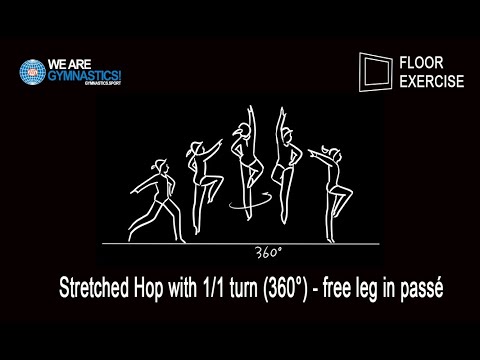 This does not deserve an A rating IMO.

It does. Because 99% of attempts at it will be horrendous

It does. Because 99% of attempts at it will be horrendous

It essentially means it satisfies the dance series CR on floor. Doing this into a switch leap should not satisfy that CR.

it seems everyone’s dance passage is similar, I think there was more variety when it was 3 in a row

Yes and it allowed jumps and not just leaps.

I wouldn’t mind if they adjusted the CR to require both be B+ but to allow the second element to take off from 2 feet.

They should also add “complexity and creativity” as another artistry requirement for a mixed series, with either 0,1,3 given.

Finally a skill we can all do in our living rooms. We should do a 1.101 competition, everyone performs, everyone judges

They’re probably doing this because they are sick of seeing ugly hop fulls with leg at horizontal (or maybe because they have to do something with the ones that fail to be at horizontal but aren’t exactly nothing), but I agree, this is exceedingly easy.

I mean, Athens FX finals gave us Moreno with a switch leap to cat 1/1 and Cheng with a split leap to hitch kick as their dance series.

Athens FX finals gave us Moreno with a switch leap to cat 1/1 and Cheng with a split leap to hitch kick as their dance series.

Technically, yes. But they both did turns into jumps which got bonus. We don’t see that anymore.

When are they going to admit that the dance passage does NOT create a large flowing pattern, but rather makes shitty chassés virtually compulsory?

So I am all for both types of connections- they require different technique when well connected. That said, I don’t find linking running steps or multiple chassés to be convincing connecting steps. Dance combos should be more directly connected.

Yeah, I do enjoy the NCAA-style direct combos. Anything but the leap passage, I guess!

Yeah, I’m with those who want more direct combos when it comes to jumps and leaps. There was more variety.