I literally don’t get it.

But thank god there would be more separation nowadays.

That was hilarious. I sort of miss it.

We were a tenth and a half away from her beating Kyla Ross to that second AA spot.

We really don’t talk about that enough. A hopped landing or a wobble is all it would’ve taken. I think she would probably have just missed out on bronze if she’d been in the final, but there wasn’t a lot in it.

Who came 4th behind Kyla in the end?

Mustafina, because of the fall. She would’ve been comfortably in the bronze otherwise. Skinner couldn’t have the high 58 Aliya was on course for either, so the could Skinner have come 3rd scenario is one that only exists due to mistakes elsewhere. Still though, she wouldn’t have needed to be much luckier to have left as the 2nd most successful gymnast of the championship.

Skinner got monster scores in Nanning. They gave her a 15.775 for her Cheng in TF, and an 8.2 for this UB set in prelims. It was an unsavory affair until Mustafina did that floor routine in finals.

Seeing these three routines, back to back, with essentially the same E Score

Why settle for essentially the same score, when this had the ACTUAL same E score as skinner? 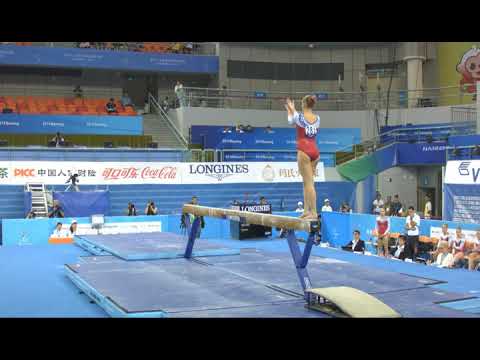 We were all Mustafina at this moment.

Once on the old board, I forgot Mustafina had ended up with bronze and referred to Skinner as having had two EF medals in Nanning. I’m still surprised not to have been forcibly ejected from the community for that one.

God, if only Maggie Nichols hadn’t dislocated her knee at Pan Ams, we would have been spared the horror of Skinner in Nanning.

God, if only Maggie Nichols hadn’t dislocated her knee at Pan Ams, we would have been spared the horror of Skinner in Nanning.

I believe Skinner was always going to go to Nanning due to vault and floor exercise strengths. Locklear wasn’t doing vault, Kocian was FTY, Baumann and Ross had solid if mediocre DTY.
Nichols would likely have taken Alyssa Baumann’s spot.
Skinner, would have been left off of bars though and not done the all-around in TQ.

Agree, except Kyla’s DTY was pretty good in 2014. Still, Skinner was more useful and important on that team than Baumann. Putting either Kocian or Nichols on beam for her loses the team fewer tenths.

The structural factors were on Skinner’s side there. Chengs are sympathetically scored in comparison to vaults from other families, and beam specialists are inherently more risky than those on the other events. Plus she had an obvious EF chance not replicated elsewhere in the team, and that was never Maggie’s forte.

Isn’t this the championship that Mustafina was sick at? I remember her looking super pale in the AA and team finals.

But yes that was the best bronze medal ever!

Can someone remind me what the controversy with Mustafina’s D score on floor was? I do remember thinking she got lucky, but not why. Did they credit her with a double and triple Y turn? Obviously the first attempt wasn’t round.