We now have “featured topics” on the home page of the site. See below… 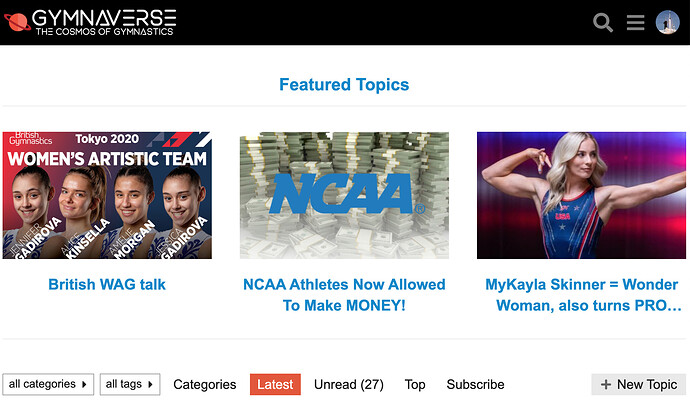 This will be great for “live discussions” during competitions as it will direct everyone right to the correct topic.

If you notice that I add an image to your post… it’s because a topic needs an image in order to feature it. So feel free to always add an image to the first post of every topic when you create a new topic. This also helps when links to Gymnaverse are shared around the web as many times the image will pop up in the share.

On mobile it will only show one featured topic… on desktop or tablet it will show three.

The featured topic that has the most recent reply will be the one that shows first.

Thank you for everything you do

I wonder if we can do graphics for each of the Olympic Threads?

I would say that we totally need to.

The site crops them… so anything important basically needs to be in the center. 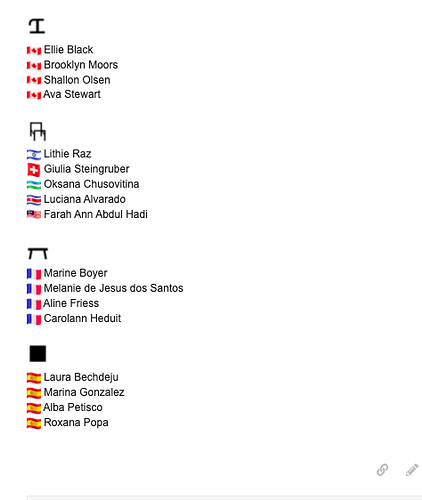 How would this look…for subdivision 4 of qualifications

I have it up there right now as featured. I think we should put one of the athletes in the background to spice it up. Let me try something.

Or the flags of the main teams competing?

That would be cool. Pretty much anything to attract attention. 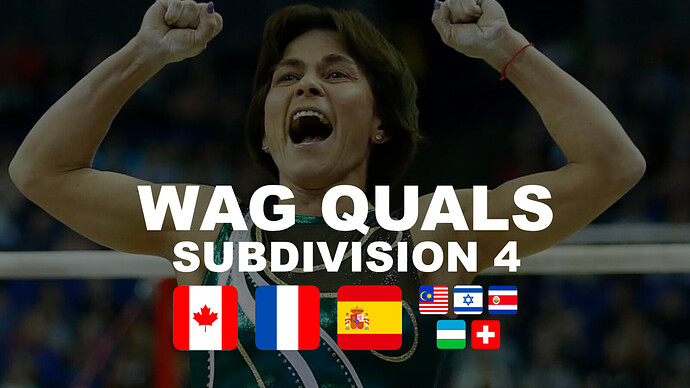 Any way to make that disappear? I don’t want to have to see Sk*nner’s face every time I come on here.

The best way to make that thread lose it’s place might be to start another compelling thread and keep the discussion going.

I added some new faces to the thread with the selection reports in them.

I’m going to reply here rather than in the Mykayla Skinner thread… but there is definitely an optics problem with how frequently Skinner “headlines” the gymnaverse.com site. Even before the Featured Topics picture headers were a thing, I personally had the following thought process multiple times upon stumbling and re-stumbling across the Gymnaverse site: “Hey, cool! A new gymnastics board. Oh, wait… Wonder Woman thread… I guess they’re all a bunch of Mykayla Skinner fans. Man, I miss wwgym. I wonder what ever became of them.”

Without knowing about the Wonder Woman intro to Skinner’s youtube videos (props to whoever did the editing, it is undeniably awesome), I took the subject header literally and honestly thought this place was home to an unironic Skinner fandom. The problem gets much worse once there’s a celebratory picture banner.

Back in the Skinner thread, @denn posted a list of six reasons for the strong reactions to her. While I agree with them, I think there is a seventh, elephant-in-the-room issue that outweighs them all: the sheer volume of posts revolving around about Mykayla Skinner. For the most part, I don’t think the content of the individual posts is the problem. People on the whole are fairly judicious, give plenty of credit where credit is due, and give specific, valid reasons for their criticism, whether it be for gymnastics or personal reasons. She’s an adult by now, and she’s put herself out there in ways that justify public judgment and the court of public opinion. I have no issue with that.

The problem, and I think this is a real one for wwgym stakeholders (the admins and the people with the rocket icon), is that when Mykayla Skinner consumes at least a third of the oxygen on this board (judging by the number of posts in her dedicated thread versus other active threads, and guesstimating that at least a third of the individual posts in the US Olympic Trials, Nationals, and Classics threads also revolve around her)… well, it changes the nature of the Gymnaverse. It’s not just a discussion board anymore. It’s 2/3 discussion board, and 1/3 home to the world’s most judicious, polite, educated, open-minded, giving-credit-where-credit-is-due hatedom. I don’t question whether Skinner deserves such a benign hatedom, but I do question whether the Gymnaverse stakeholders actively desire to be the ones to host it.

Here’s my specific admin suggestion: Close the Wonder Woman thread. Get rid of the dedicated lounge area that’s become an all-purpose, permanent watering hole. If people want to discuss Skinner’s decision to turn pro, the wwgym judging, whether a fix is on, Tom Forster’s decision-making, or even Skinner’s next youtube video, they can do all that in other threads. (And if a thread is titled “Let’s re-litigate 2016,” then at least I’ll know to cheerfully avoid it.) If an appropriate thread doesn’t yet exist for the latest bit of Mykayla Skinner news, I don’t think it’s a huge ask for people to decide for themselves whether it’s worthy of a brand-new top-level post. These threads can all rise and fall and die their natural deaths when the topic is exhausted, just like any other thread. If another thread becomes the next permanent, all-purpose, Mykayla Skinner watering hole, then the admins can close that thread once its original topic is exhausted.

I realize that this approach is a bit inconsistent with, say, the semipermanent Chellsie Memmel thread that’s also turned into a bit of a watering hole. But there really is a huge difference between a watering hole for a fandom and one for a hatedom, even a benign and justifiable hatedom. And I do think the sheer amount of attention paid to Skinner does stifle other topics. No matter what is going on with other countries’ Olympic selections, that Wonder Woman thread is always first or second in the list of active topics.

This is just my two cents. Feel free to take it for exactly what it’s worth. I’ll likely still stick around even if that Wonder Woman thread also sticks around, but it really is impossible to ignore. And I really do think its permanent status has a noticeable effect on the culture of this still-forming board.

That 7th thing, volume of posts, is part of the 6th reason I listed (the overall impression of the discourse about Skinner), but I think you are right to highlight explicitly. After the fixes above, I don’t think we should close the thread because (a) to be fair, it’s reasonable that people want to discuss the topic, and (b) if there’s not a dedicated thread, other threads get railroaded.

I do note that many of the posts in that thread are actually about other (often very nice) things. Moderators — please try to extract groups of related posts that are NOT about Skinner’s Olympic participation to make spin-off threads with other titles.

ALC makes some good points and suggestions. I’m grateful for Denn getting right on it. You guys are awesome

I agree with the word that I’ve never heard but kind of like… “hatedom”… definitely don’t want to be the “hateverse”.

I started the thread (and I do like MyKayla Skinner just like I like all of the athletes)… and I actually just started it due to the cool editing of her turning into Wonder Woman.

The Gymnaverse is expanding and transforming everyday… thank you all for helping make it great!

I like this moderator response a lot and I think it does address my main points even without forcibly closing a thread (which I realize can cause many more problems than it solves). Thanks for the quick, thoughtful response.