Example of a beam routine with no Artistry & Performance deduction?

Can people post current beam routines that would not incur an Artistry & Performance deduction?

Racking my brain, I can’t think of any. Most gymnasts incur the -0.1 for “Performance of the entire exercise as a series of disconnected elements & movements (lack of fluency)” as well as -0.1 for
“Missing combination of movements/elements close to the beam with a part of the torso (including thigh, knee or head) touching the beam (element not necessary)”. Murakami gets -0.1 for the latter, but I think she evades all other deductions.

Here is an FIG video detailing how to avoid the -0.1 for lack of close-to-beam movements. I don’t think anyone competing today evades this deduction; and why bother taking the time, when artistry isn’t incentivized?

Liu Tingting is one of the few gymnasts off the top of my head who would avoid this deduction, but she’s probably getting the -0.1 for series of disconnected elements, since her routine is very pause-heavy.

Thank you! Couldn’t figure out the difference because they all seem the same in that regard to me.

I feel like routines from the 80s/90s had better variation in rhythm/tempo, where today I think the micromanaging artistry deductions have put gymnasts in a place where they move really quickly through their choreo so as not to give the judges a chance to deduct for pauses. As a result, the choreo itself ends up being bland/repetitive and feels rushed.

I mean, I certainly prefer what we’re seeing now to the posing, arm-waving, and lunch breaks of the 2000s, but I wish I could have grown up watching BB during the Soviet era rather than the open-ended code. It just doesn’t produce the same joy it has when you watch nearly any athlete from the 70-90s.

That HelpDesk is ridiculous. As mentioned, who’d spend time on choreography to avoid a max -.10? Furthermore, the examples shown prove most, if not all, evaluations in this sport can’t be boiled down to 0.0 vs. -.10.

In theory, this could also be applied to updated CRs (i.e., 3-element mixed / dance series on BB or FX). This would assign value to components of a routine that can’t be broken down by individual letters, and to more subjective aspects of the sport, IMO.

I agree. Yao Jinnan’s example in the help desk video inspires confidence. She’s not spending too much time with it, nor is she doing anything particularly elaborate. I’d much rather see true low-to-beam work, but it’s certainly possible to just eek by as Yao does with her leg changes.

The ring shape with the leg is what makes it, I think. Basically do a cartwheel or a valdez, or an interesting split or ring position. For someone like Suni, this is an easy tenth. Simone, nah, she’s gonna let it go.

Seems like doing an extension roll also gets you the points. I’m sure Simone could throw that in before going into her wolf turn.

That would be a good addition, Simone seems to have the time!

I think the only artistry deduction Gerasimova should get is .1 for “Performance of the entire exercise as a series of disconnected elements & movements (lack of fluency)”. She has a sitting beam mount–not sure what exactly that even is called tbh–and then later in the routine does a back shoulder roll…although the requirement specifies it’s a combination of movements close-to-beam. Hm. . She definitely has clear choreographic moments with changes in rhythm so she would avoid that one too, I think. 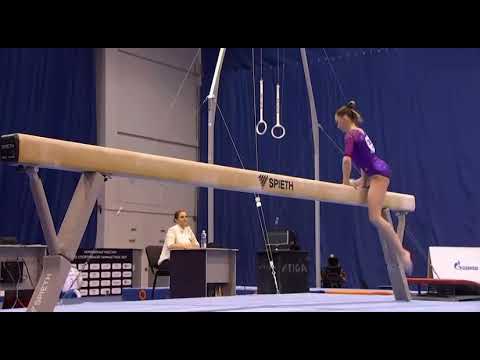 She had some falls in PT in Switzerland on beam but she looked confident in the one training video. I think she could win here. Her PT floor is a very different story.

Her legs touch the beam on her stoop thru to sit mount. Then she lays on her side, followed by swinging around to do a sort of stag position close-to-beam.

Okay…so, I think she actually should go deduction free for a confident routine like this.

I don’t think she does enough. I think it needs a degree of complexity that she doesn’t quite get here.

My interpretation of that help desk video is that it needs a roll, a movement on the hands/shoulders (like a cartwheel/Valdez/Moceanu type shoulder roll), or a pose that is complex (like Holly Vise did in 2003).

Check out how Yao Jinnan satisfies the requirement at 3:40. Based on that, I think Simone does too.

It’s the position at 3:48 which I think achieves the requirement. Simone doesn’t show this level of flexibility and/or complexity.

I think that Simone’s directional change / rotation (ultimately completing a 360 turn by the end), coupled with the sequence being integrated directly with the wolf turn would give her sufficient complexity even if she doesn’t show a flexibility hold / position.

She should throw a second on beam spin around thing just to be sure. She does have time and it is kinda a freebie point with a little planning. It feels like to “point-free” moves is what gets you over the top. Mounting and doing the splits with a little pose and then getting standing up doesn’t get it, the standard lay-on-the-beam and standing up isn’t enough, but maybe if you combine the two…

I guess it’s a judgement call. She’s on the boundary, for sure. I wouldn’t be mad if another judge ticked their box for that. But I wouldn’t, tbh.