Hard to believe, but 2024 grads can officially commit tomorrow! This class has some amazing gymnasts who will be getting a ton of big offers. Should be exciting to watch.

Wouldn’t be surprised to see her sign up with Stanford.
Her brother went there on scholarship. But then again, you never know.

Are you thinking of Robert Neff who did gymnastics there? He and Avery aren’t siblings

Are you thinking of Robert Neff who did gymnastics there? He and Avery aren’t siblings

Then Tim Daggett was wrong.
He stated that Avery’s brother Robert competed at Stanford and was on the men’s NT. It was either the 2021 or 2022 Nastia Liukin Cup that he said it, can’t remember which one.

That’s probably why so many people are thinking she’ll go to Stanford. I’d love to see it anyway, because Stanford’s recruiting has been good, and I’d like to see it get even better, but Robert Neff is from Wisconsin, not Utah, and they have different parents and siblings listed on their USA Gym profiles.

but Robert Neff is from Wisconsin, not Utah, and they have different parents and siblings listed on their USA Gym profiles.

Than you for clearing it up.

I know Tim Daggett is not perfect, but that is a huge error on his part.

FWIW I heard Neff has OU, LSU and obviously Utah in her top 3. One of my recruits was at camp with other recruits and they probably have the most info, since they are all friends on social media, lol. Im kinda hoping Auburn gets a big name this class.

Kelsey Slade to OU as well. I think that leaves them with 1 more left. Im sure its for Avery Neff to have or turn down.

Isn’t it 12 max? I don’t understand how they have any left. As far as I know, the 2025 season will have Jordan Bowers, Danae Fletcher, Moorea Linker, Danielle Sievers, Ava Siegfeldt, Faith Torrez, Addison Fatta, Hannah Scheible, Caitlin Smith, Keira Wells, Elle Mueller, Lily Pederson, and Kelsey Slade all on scholarship. That’s already 13 and what if Audrey Davis or Kat LeVasseur want to take their 5th year? The only ones I think could possibly not be are Danielle Sievers and Danae Fletcher, but I thought they both were. 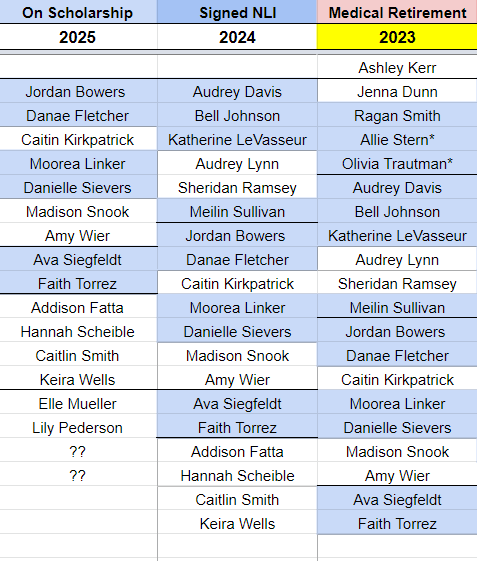 I saw that, but I know they say they’re not always accurate, so I tried to check more, but according to Spencer, all four in that senior class and the two in that junior class signed NLIs and therefore scholarships, and everyone in those sophomore/freshman classes announced on their Instagram that they were on full scholarships.

Of note though if Davis or Lavasseur want to take their Covid year they can only be on scholarship IF there is one available, other wise they are walk ons or could transfer to another university to do a 5th year.

I saw speculation that if Avery Neff doesn’t want it, they’d save this last scholarship for one of them, but that would still seem to leave them with 14 scholarships instead of 12. Lily Pederson’s mom apparently also said there was one more scholarship, not sure where.

I know they are also trying to get one of their 2023s to come early(i know one of the recruits). Not sure what that is about.

Neff still has a visit to Florida i believe. So itll be a choice between OU, Utah, Bama, LSU, and Florida, unless theres been some change i havent heard. Everybody seems to think Utah is the front runner, and I think she considered canceling her Bama visit, fwiw. Next week this time should bring her announcement. What other big names are out there for 24?