Is anyone else watching Chellsie’s videos every week? I’m amazed at her skills and that she’s only training 15 hours per week. What does everyone else think?

I hope she keeps going for the full quad and beyond. If she’s successful, I think we’ll start seeing many more American women continuing on after college. She is an incredible ambassador for adult gymnastics.

I would love it if she had a position with USAG some day (besides being a brevet.) Maybe even spearheading an official adult competitive system. Levels 1-10 for 18+ only. Her family gym just started an adult gymnastics class, we definitely need more of that. There’s so many possibilities to grow gymnastics worldwide as an adult sport.

On a personal level, when I was a kid my parents couldn’t afford for me to do much gymnastics. My user name is passion because gymnastics has been my passion since I was 10 years old, but I never was able to do more than about a year of rec classes. Once I was an adult it felt like it was too late for me to do sport. Now I’m entering my late 30’s and doing competitive Kung Fu, something I didn’t even know was a possibility in my 20’s. There needs to be more options for adults to start sport in general, especially for people who didn’t have the privilege of being driven to classes as a child.

Watching Chellsie gives me so much hope. The way she is doing this feels different than athletes doing random comebacks in the past. She spent a year just conditioning and getting in shape. She emphasizes taking things slow. Her journey doesn’t revolve around the Olympics. Her message is just gymnastics is fun, moms can do sports too, age is not a limit.

“Don’t stand in your own way of doing
something just because you know how
hard it’s going to be.” - Chellsie Memmel

Sometimes when Chellsie uploads these videos, she does it as a Youtube Premiere and there is a live chat running next to the video where Chellsie answers questions. I picked out some of the answers of interest from this weeks chat: 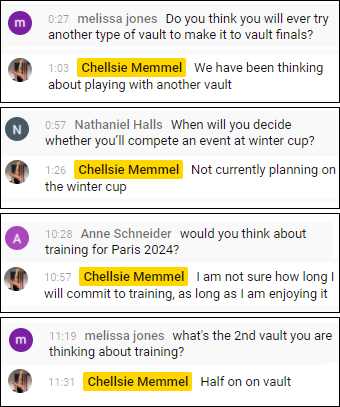 Loooong time ago she did a decent Omelianchik. There’s video of it from the 2003 Pacific Challenge (I think that’s what it was called. Not Pac Rim). By nationals it was gone and we never saw it again.

I think it was maybe Pacific Alliance Championships?

Haven’t figured out how to embed videos yet.

Just put the URL on its own line with nothing else on that line. 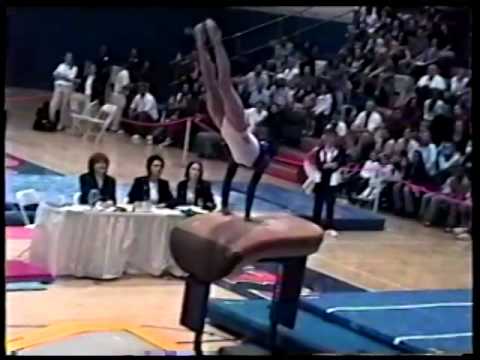 Yay, videos! And that’s the one I was thinking of.

Too much shoulder angle when she hits the table, but decent. Fixing that, maybe I could have seen her developing a Pod or even Lopez. Maybe.

She had very poor technique on VT previously.

She got better once Andy took over coaching and she seems to have corrected the poor technique based on the new training videos.

She has said she was really scared of vault back in the day and it’s not as scary now. I wonder if that gives her more space to make corrections. Her Yurchenko technique is so much improved.

Her basic yurchenko technique was always very sound. But it went straight to ■■■■ the moment she started twisting more then a full. The foundation was there, but she never trusted it.

This is her Y full from 2008. Its fine! Nicely extended all the way through her shoulders and no pre-twisting. She could be a little further up on the table, and could block more, but this shows that she had a basics down. Its not like some gymnasts who you know chucked and prayed from day one.

But good lord did all that good technique go right out the eff’ing window when she added a half twist two nights later!

I highly recommend slowing down the playback speed to really see the difference.

i try to see her videos every week and is great that comeback and is doing a hard work training 15 hours per week but i think her training is more intense than the normal, i hope can see her in a championship soon and be a great comeback.

also is a big responsibility workout and care her family and she’s being persevering and no any person think in a comeback later of a long time , really admire her for her big effort and perseverance. 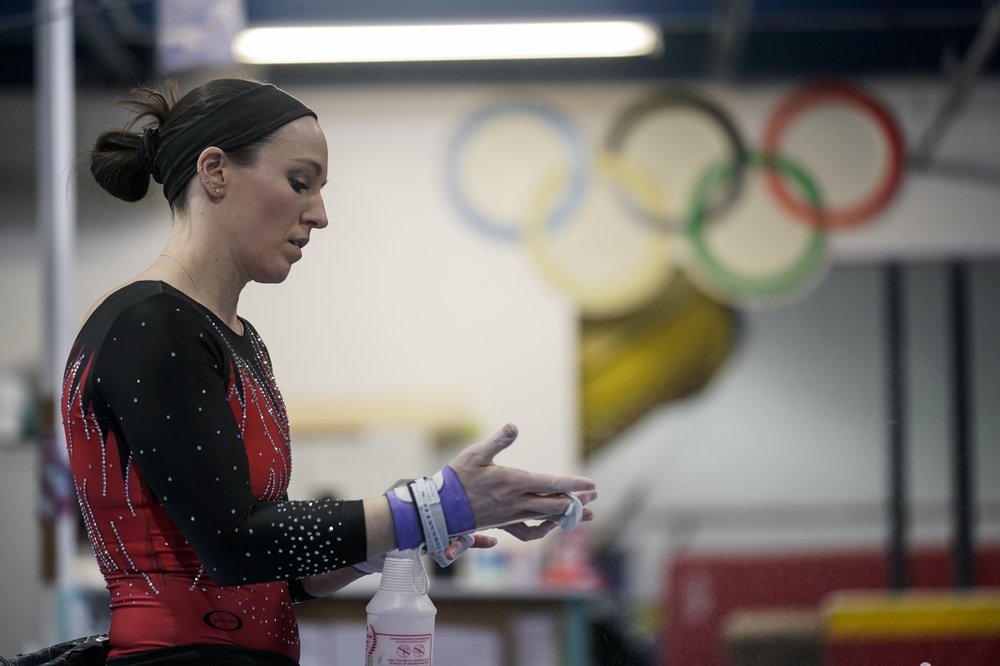 Chellsie Memmel wants to emphasize something. This is not about ego nor unfinished business nor fending off some sort of early-onset midlife crisis.

The 32-year-old Memmel’s return to competitive gymnastics after spending nearly a decade getting on with the rest of her life is about love. It’s about discipline. And an inside family joke that turned into something far more serious.

She doesn’t need to do this. She’s got a world all-around gold medal tucked away somewhere. An Olympic silver medal, too. When she officially retired in 2012, Memmel went out on her own terms. She got married, had two kids, became an integral part of running the gym her family owns in New Berlin, Wisconsin, and earned a reputation as one of the country’s most respected judges.

So no, trying to make the U.S. national team while competing against some athletes born the year Memmel stood atop the podium in Melbourne, Australia in 2005 as the best female gymnast on the planet — isn’t some publicity stunt. There are easier ways to do this while juggling motherhood, coaching, judging and returning to the elite level all at once.

“I know people will be thinking I’m doing it just because I want to be in the spotlight,” Memmel said. “That couldn’t be farther from the truth. I don’t know why I would put myself through this. It’s the hardest sport ever. There’s no way I would be dragging myself out of bed to do this instead of doing other things.”

The “other things” had consumed her for years. Yet when the COVID-19 pandemic hit last spring, Memmel suddenly found herself in an empty gym with time on her hands. So she started fooling around: a skill here and there. Momentum built. Her body, which she says is “stronger now than it’s ever been” responded. Muscle memory returned.

Her father, Andy, watched with equal parts admiration and bemusement as Memmel shared video of her fooling around with the gymternet, the sport’s fervent online community. He was impressed, but when she mentioned getting serious, the only coach she’s known didn’t exactly jump at the idea.

“I pushed pretty hard to see if it was even possible from a gymnastics standpoint,” Andy Memmel said. “I had no interest in doing this for ‘I just want to do this for adult gymnastics, or this is fun.’ If she’s going to make a run at it, let’s do it properly.”

That meant no shortcuts. Getting back to her level as a teenager wouldn’t be enough. The sport has marched forward during her break. Memmel knew she had to evolve along with it.

She has. There’s a whole new bar routine. Upgrades on both floor exercise and vault, where she’s working on a “Cheng” that’s impressed USA Gymnastics high-performance team coordinator Tom Forster. She’s experimenting on beam, working on a skill that — if she pulls it off in competition — would bear her name in the Code of Points.

That’s not simply fatherly pride talking. Forster admits he wasn’t sure Chellsie was serious until she told him she wouldn’t be judging at competitions in 2021 because she planned on being judged instead. While Forster’s made it a point to give Memmel space, what he’s seen on Memmel’s Youtube channel is encouraging.

“She looks like the Chellsie Memmel we knew,” Forster said. “It’s remarkable. You know, her confidence level I think is different because she’s much more mature and she just has a lot more life behind her to know how to train, how to not take things so seriously and give herself a break. She seems to be training smarter.”

Still, she’s not immune to the physical toll the sport takes. While her thrice-repaired shoulder, which basically cost her a legitimate shot at making the 2012 Olympic team, is fine, an ankle injury last fall stalled her progress. It forced an adjustment to her timeline. She had hoped to be on the floor in Indianapolis this weekend at the Winter Cup, the first major domestic gymnastics competition in a year.

Instead, she’ll stay home, hoping to attend the next national team camp in March. If that goes well, the American Classic in April figures to be her first meet since May 2012. There are no plans to do this as a specialist. She plans on doing all four events. Yes, really.

And yeah, it’ll be a little weird. Memmel isn’t kidding that she’s got leotards older than some of the young women she could end up training alongside. While it’s not uncommon for international gymnasts to compete into their mid-20s and beyond — the seemingly ageless 45-year-old Oksana Chusovitina of Uzbekistan will compete in her eighth Olympics this summer — it’s much harder in the United States, where the talent pool is the world’s deepest.

Memmel knows that better than most. She’s watched Olympic champion Simone Biles redefine the realm of possibility. She’s judged athletes doing skills that didn’t exist in 2005. So reaching the Olympics would be great. But it’s also not the point.

Memmel bristles when asked if she could be tarnishing her legacy if the reboot fails.

“That irritates me,” she said. “In other sports, nobody bats an eye when you go out and play it for fun, no matter what age you are, especially in men’s sports. Why is there that stigma that you have to stop doing gymnastics when you hit a certain age? … I don’t like people saying you should stop doing it because there’s nothing left for you.”

And there very much is something left. This is not a “Tokyo or Bust” situation. This is rediscovering and sharing the joy that led her to gymnastics.

Doing things for love of the spotlight is not the first phrase that comes to mind when one thinks of Chellsie. Also, I’d forgotten how bad that 1.5 was!

A Cheng??? I know she had an Omelianchik back in 2003 and thought she might do another round off half on vault, but I was not expecting to hear she was training a Cheng.

Here’s her Y full from 2011. It’s pretty. Damn shame those pretty fulls never resulted in harder vaults that weren’t chucked. Maybe this is finally the year.

Color me shocked, I forgot her DTY was actually decent at 2006 worlds. Not a great video, but…this isn’t completely terrifying. And she only did a full at nationals. Anyone have her team final vault? She scored slightly higher, so I’m curious to see it. I didn’t see a video while doing a quick search. 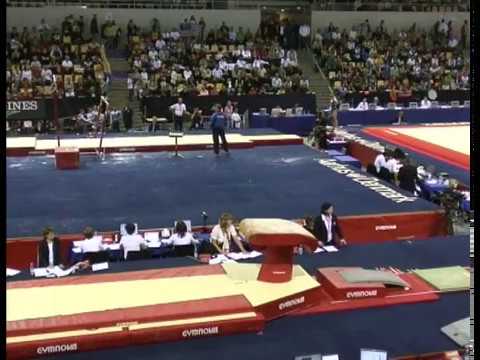 Anyone have her team final vault? 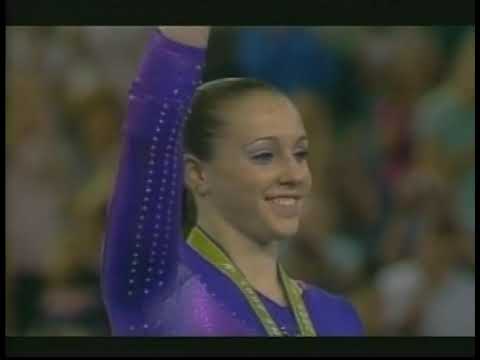 I set the video to start at the time she salutes to vault. If that doesn’t work, it’s at 5:15.

That was about to be my response! I’m not saying she was channelling Cheng Fei in Aarhus or anything, but it was definitely better than the 1.5 from 2008. Decent block. Of course, she will have got more reps in before 06 worlds which may explain part of it.