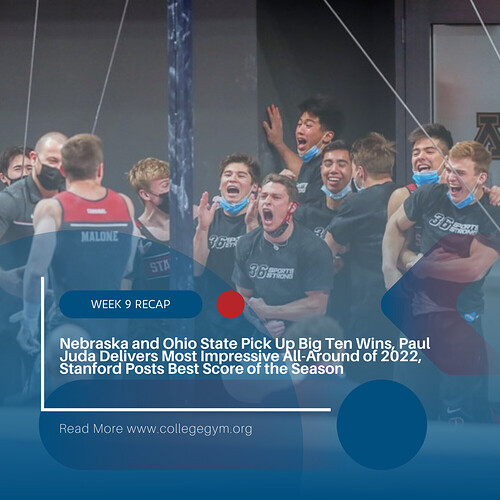 CGA’s recaps haven’t been great since Logan Bradley left, but this year is especially bad. These recaps should be telling the story about how the meet went down with the facts, stats, and maybe a personal interest about an athlete on each team, that had a good day.
After reading today’s recap of this past weekend’s meets, I need to speak up. It is obvious that they don’t bother to watch 1/2 the meets they write about. It would seem they only care about 3 teams; Stanford, Oklahoma, and Michigan. Their stories are much longer and have more detail. It’s been evident that they haven’t watched Nebraska or Illinois all year, as I stated in a previous comment on another thread. And now, that they had their match-up, even more so. They wrote this 5 short paragraph commentary by looking at the scoresheet instead of the meet. Had they watched the meet, they wouldn’t have written as a dual meet, because it wasn’t a dual meet. It was a quad meet with Iowa and Minnesota, the new members of Gym ACT. Illinois started on Vault. Nebraska started on PB. Iowa on Floor. Minnesota on PH.
I’ll only do the running scores for Illinois/Nebraska.
After 1
Illinois 72.00 VT
Nebraska 66.60 PB
Running Score Nebraska behind 5.4 points
After 2
Illinois 67.10 PB
Nebraska 66.35 HB
Running scores-
Illinois 139.10
Nebraska 132.95 behind 6.15 points
After 3
Illinois 64.40 HB
Nebraska 67.95 FX
Running scores-
Illinois 203.50
Nebraska 200.90 behind 3.2 points
After 4
Illinois 67.35 FX
Nebraska 67.55 PH
Running scores-
Illinois 270.85
Nebraska 268.45 behind 2.4
After 5
Illinois 67.80 PH
Nebraska 68.05 SR
Running score-
Illinois 338.65
Nebraska 336.50 behind 2.15
At this point, barring any disaster for Nebraska on Vault, they have won the meet. With Illinois on SR, typically Ring scores can’t compete with Vault scores. Sam Phillips hits a 4.8 vault with a 14.1. Liam Doherty- Herwitz has a deep landing booty touch, jumps and turns around to prevent sitting his 5.2 vault scoring 14.1. Donte McKinney hits his 5.2 vault with a season and career-high of 14.7. Charlie Giles stuck his Yurchenko 2.5 cold for a career-high score of 15.05 on senior night. 3rd vaulter in the NCAA to score over a 15 and the only Big Ten athlete. 1st time since Anton Stephenson in 2019. Taylor Christopulos fell on his Kas 1.5 and scored a 13.60.
Illinois did a very respectable job on rings. 2 scores were at or above 14; Logan Meyers and Ashton Ananya. With 1 fall and 3 tenths in ND, that hurt them. All hit routines would have made the final score a lot closer.
After 6
Illinois 67.00 SR
Nebraska 71.55 VT
End Score-
Illinois- 405.65
Nebraska- 408.05 ahead by 2.4.
That’s an 8.55 point swing. Illinois led the whole way to Nebraska winning the meet in the 6th Rotation. This was a season-high for Illinois, too, that was not mentioned in the article. They did highlight Ian Skirkey for his beautiful PH routine. I wish it was a little more detailed, like stating his SV or some of the skills he performed. They barely mentioned Iowa and Minnesota. They could have recapped their meet with the other GymACT teams or added a couple more paragraphs talking about their competition.
They wrote the article lumping the old way of doing things; FX/PH SR/VT PB/HB as if that was the way meet was competed.
Looking at the rest of the write-ups, all but Stanford, maybe Oklahoma, had very short write-ups. They mentioned that Oklahoma was competing against itself. But couldn’t you say the same for Stanford and Michigan?

Now onto the CGA weekly awards for Gymnast of the Week, Rookie of the Week, Specialist of the Week, and GymACT GOTW.
To my knowledge, they have never published the guidelines for these awards. What determines a GOTW? What determines a Specialist? How many events is a specialist? 1? 2? 3? If you’re a 3 event guy, you are a ‘specialist’ for that team, but is that too many events to be considered a specialist by CGA? Should a Freshman be both GOTW and ROTW? Or should Freshman only qualify for ROTW and 2nd-5th years be GOTW? Should an AAer be awarded the SOTW?
So far this year, they have not awarded an Illinois, Nebraska, or Penn State athlete in the Big Ten or an Army, Air Force, William & Mary, or Springfield athlete. There are 13 teams in the NCAA, 7 of which, have never been recognized. I’m not saying everyone deserves a participation trophy. However, if CGA is the media for NCAA Men’s Gymnastics, I feel it’s their job to “advertise” for all the teams. Stronger Together Campaign? How can we, as a sport, grow if they are only recognizing Stanford, Oklahoma, and Michigan. Their bias is evident. The other teams of athletes, not recognized, feel slighted. They have no respect for CGA. That’s not good when the athletes you are representing have no respect for you, but you are speaking, or not speaking, about them.

Hey! Hey!! Ian Skirkey, from Illinois, won specialist, as he should have!

I like the write up of the meet as if it were a horse race.
That’s how I watch meets. It makes it a story.

I’m not finding the CGA stuff terrible, but then again I’m not that knowledgeable. Anything is better than nothing, and there isn’t that much coverage of the men’s NCAA anywhere.

I think GymCastic does a little.

There was StickItMedia, but I think the person who ran that has moved on to other things.

These things are a lot of work to run, but the more the merrier.

If there is competition everyone has to up their game.

Thanks for your reply and vote of confidence. I agree that if there are more people writing about MAG, it’ll be better for the sport. Not sure I’m up to writing for a blog or a website. Definitely, something to keep in mind.
Logan was very good at telling the story of a meet. The 3 guys don’t seem to care that much.
It’s a shame about Stick It Media. I enjoyed their posts and different point of view. They had no biases, that were evident. They genuinely loved that sport and reported on it.
I can’t listen to GymCastic. Jessica’s rants turned me off over 2 years ago. Honestly, I’m not a huge fan of NCAA WAG. It all looks the same to me. Jessica is not a big fan of Men’s gym, even though, she says she is. I’ve seen her too many times put the men down instead of lifting them up. I think Kensley does a decent job. You can tell she tries hard. I like her newer stuff with Virtius.