There’s been a different feeling amongst the women gymnasts this time around. Different countries’ gymnasts cheering for each other and happiness seems more prevalent than disappointment. It might be the one good thing to come out of this strange Olympics. Maybe it’s because social media allowed them to communicate more, the lack of the usual support systems, lack of fans cheering in the stands, gratefulness to be there, relief from the strictures of COVID. But it’s refreshing.

Totally. There were times it almost felt like an NCAA final, people cheering, being supportive, cross-team interaction/support, dancing on the sidelines? There were times I was asking me “wait can that gymnast even speak English??”

Imagine it with a nice crowd.

If anyone deserved a crowd, it was Chuso. I wish she could have got a standing ovation, and I teared up watching them all give her what they could in the circumstances.

Maybe after the past year or so they all realize that they are grateful to just be there. And maybe, just maybe they have put gymnastics in it’s proper spot- it’s not life or death, it’s JUST gymnastics. Even at this level, there is so much that is far more important than the sport.

There is a big difference in attitude between the US and Russian teams compared with previous generations, I think largely due to the friendship of Angelina and Simone.

I remember during 2018 Worlds they kept showing Angelina and Morgan high fiving each other.

I think the difference is we can see it now more because of social media and the advance of technology makes it easier for people to communicate, even if they don’t share the same language. Google translate may not be perfect, but it’s light years ahead of hand signals and facial expressions people had to use in the past. Thought this was a great article on that: 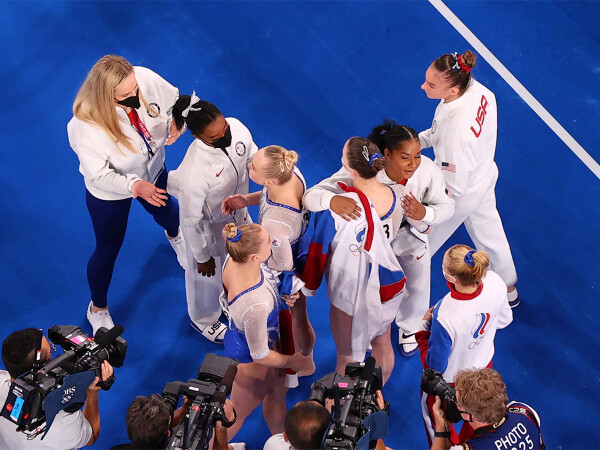 Current gymnasts have no use for the rhetoric and narrative of the past.

I feel like the us team also really respected Musty too.

I feel like the us team also really respected Musty too.

Except for Skinner. 2014 FX was cosmic trolling at its finest.

And also that every gymnast competing is significantly removed from the Cold War era.

As someone who was partially drawn to international gymnastics myself for the Cold War mystique of it, I found that to be a really nice article. And well-written, too.

I wonder what America’s four-year fans think of all the camaraderie. They grew up during the Cold War and never got the memo that it ended.

Increasingly though, they didn’t. I’m 35–not old, certainly, but very much a full fledged adult and approaching middle age. My first Olympic memories are 92 and the Unified Team. I remember how the Cold War narrative leaked into places in my childhood, but I didn’t grow up scared of the Soviet Threat or thinking nuclear attacks were imminent.

Talking to people, there’s a bit of a split in 80s babies older than me, often depending on how politically focused their families were, and most people I’ve talked to younger than me mostly had the same experience I did.

People ~40 and younger make up a huge percentage of the population, and the main place we got fed the Cold War narrative in our lives was Olympic sporting events. Honestly, stories of the athletes being friendly fits my life experiences of globalization and the internet shrinking the world much better than the old Cold War narrative.

Whatever the reason or reasons its great. Isn’t this the whole point of the Olympics?

Social media is also helpful for the international gymnasts to form bonds and friendship.
All the gymnasts seem to be really supportive of each other. Even look at the mixed teams competing, giving each other high fives and cheering for each other, taking group photos.

The love for Chuso was also simply amazing.

Another factor is that there are so many more internationals now and most gymnasts compete for longer than 4 years (other than China) so they see each other at various meets. Especially the countries that don’t have strong full teams and attend various meets. Mokosova, Derek, Chusovitina, etc are at most Challenger meets.

I definitely appreciate it. International sports is the only time people from enemy states (Japan & North Korea) can interact with each other. Too bad North Korea couldn’t make it this year. Some people aggressively dislike it but they fortunately don’t get their way.