I think that would depend on how they do at CWGs. If any of them manage an individual medal then yes

Yeah, if nothing else I can’t see that the others all did AA even. It looks like she’s down to step in if they need her to avert disaster, what with being down the road anyway, but doesn’t actually want to compete. Which is interesting in itself actually. The Gadirovas seem to have gone down the route of gymnastics rather than profile.

I think Jessica said in her post that hopefully she’ll be there supporting, so they’ll probably both be there just not competing

I guess their long term aim this year is worlds. Which is around 2 months out from Euros, so doing all 3 might not be possible anyway.

Yes. I think most of us felt that trying all three was too risky and the safest option would be to do one of CWG and Euros then go and prep for worlds, but it’s interesting that the two with the ability to potentially win multiple golds at a home CWG and thus increase their commercial opportunities have decided against it. With CWG being such a weakened field because the continentals are worlds qualification, gymnasts of the calibre of the Gadirovas wouldn’t have found much competition there. If they want to test themselves out, Euros is the much better opportunity. And that looks to be what they’ve prioritised.

I saw this on Reddit, with upgrades who knows what’s going to happen at Worlds 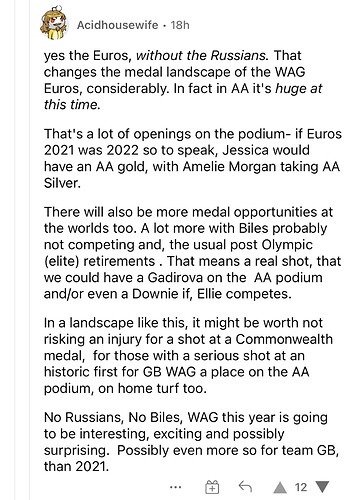 I do think Worlds will be United States, Italy, and Great Britain for the team medals.
China is China and could contend but they are still weak on vault and floor. Who knows about their consistency.
Belgium and France shouldn’t be too far off either. 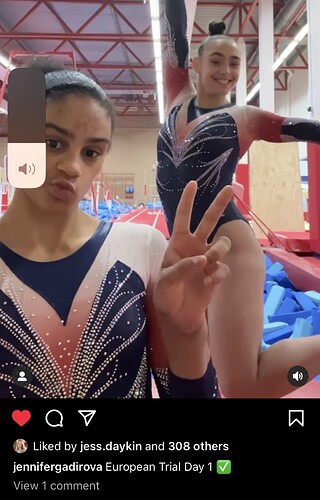 So they are doing more trials after naming the CWG team? On the subject of trials, are they going to continue posting scores from trials after last year or will it be forgotten now no one is making a fuss about it?

For Worlds, I think you’ve got to make China a favourite for a medal at least, they might not have a great recent record in team finals, but on paper they have a good team. For all their relative weakness on vault and floor they should be far stronger than GB and Italy on bars and beam.

Doubt they will post any. Unless of course the rent a mob on twitter forces it again.

Re trials, Ondine is in the picture, so presumably making run at both. I’m stalking social media trying to see if I can find a group picture anywhere. No luck so far.

With China, it’s as much about whether they’re going to start actually sending their best team again. I’ve not been watching closely enough to know how likely that is.

That said, surely not even they can be so self sabotaging they make it three misses in a row, in these circumstances?

People who have been seen at lilleshall so far are: Jessica, Jennifer, Ellie (vault training video), Ondine and Claudia

image1170×2532 113 KB
These are girls who were at the trials. I assume that’s Jennifer and Jessica is using her commonwealth trial score (along with English and British championship results)
ArnoldRimmer June 26, 2022, 5:56pm #1546

Do you have a link to the vault training video? I couldn’t see it on instagram or twitter.

She posted it on her stories, so it’s gone. However she does seem to update the highlights every so often so she might put it on at some point

No Alice in that photo, although it’s possible she’s using her CWG trial scores I suppose. Assuming she wants to try for Euros, she may not of course.