This belongs in the TF thread but it isn’t open yet so I’m putting it here.

We have a few hours yet before lineups are finalised. There are a few obvious lineup dilemmas. What springs to mind is the US on bars, GB on bars and China on beam. What do we think will happen there?

I know I want GB to sit Ondine out of bars and use Jess instead. She’s more stable, and I’d argue that’s more important for GB than squeezing out every tenth. It’s not a sensible risk for maybe 0.6 more at best. But I don’t know if the coaches will see it that way.

Also for the US - do they put Chiles up on bb?

Do we know yet if Flavia is injured?

For me that one’s not really a dilemma. Use Skye, Jade and Shilese. I appreciate that Shilese has had her own consistency problems on the event, but Jordan has now fallen twice in 66% of the beam routines she’s done in major competition. And a pattern is developing where when she falls, she tends to have a disaster of a routine rather than salvaging it. That’s just not a risk the US can take. They were 2.8 points ahead of GB in qualifying and most of the teams below them have a fair bit of ground they could make up. Probably the US could still win with one fall, but a wipeout routine could lose them the gold entirely. It must have been mentally very tough on Jordan to miss so badly in her final routine, to go out on a low and have to stew over it for three days. Better for her to focus on hitting her other three events out of the park.

Nothing on social media. Start lists should come out later this evening, so perhaps that will give us a clue

There is nothing in this world, no amount of money, riches, and fame, that could convince me that Jordan Chiles belongs in the beam line up.

I mean look at Tokyo. I was sure she was going to bomb there too. Not that I’m saying let’s give her another chance, but still

The only consistent one is Jade. It’s a throw of the dice no matter who goes up.

I’m interested in the alternating routine dynamic (we’re doing that here, right?). How do GB and USA play off each other in a scary beam rotation? Does Japan stabilize China?

The question for me is, what would the US gain from it? Jordan’s hit routine is at best going to be a few tenths higher than what Jade and Shilese got in prelims, and she is less consistent than either. The US need stability more than they need the possibility of an extra 0.4 or whatever. If they go 12 for 12 they’ll win this.

I’m interested in the alternating routine dynamic (we’re doing that here, right?). How do GB and USA play off each other in a scary beam rotation? Does Japan stabilize China?

I don’t know about beam, the only thing we know about GB on that event is that it’s invariably futile trying to make predictions, but I do think it’s going to be interesting seeing them go in Olympic order for the first time. Because bars is this team’s weakest event and vault one of the best, it might be a mental positive for them to be able to come out with a show of strength rather than catching up- though that didn’t bother them last night. But the US and GB are both much stronger on VT/FX than bars and beam so that could be significant. And China have their best events bookending the competition too.

I’m also interested to see if the US decides to bench Leanne Wong. She’s not a top 3 vaulter; do you risk putting her up on bars or beam?

I did idly wonder if they might end up going with Leanne on bars, if she looks good in training. Beam seems less likely.

Why? why would they do that? Do you think they’re watching qualies and thinking “I think this thing needs more excitement and surprise!”

I refer you to yesterday’s Samhain based answers.

Start lists out. Flavia doing AA and Leanne on bars. No Jordan on beam

Seems like they listened to @ArnoldRimmer in GB headquarters: 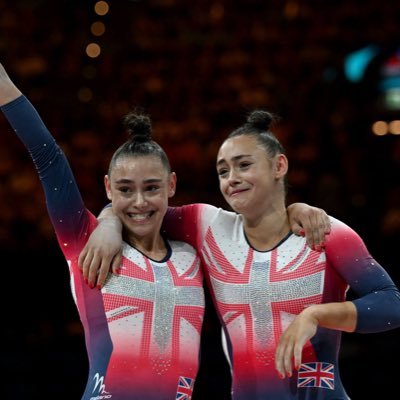 That BB lineup makes me nervous, mind, but I don’t know if there is any combination that wouldn’t do that.